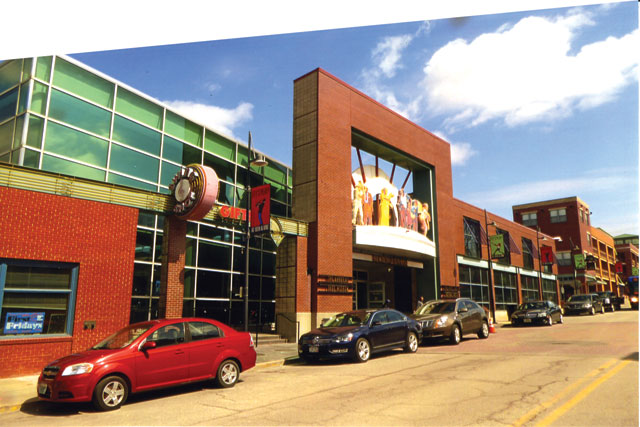 Located on 18th and Vine are the Negro Baseball League Museum and the American Jazz Museum. Photo by Carla Waldemar

Honk if you love barbecue. Even better, head to Kansas City. Here, close to 200 pit masters fire up the oak and hickory to flavor anything and everything you can maneuver onto a grill. A mixed marriage in these parts involves a fan of no-frills Arthur Bryant’s (including everyone from Count Basie to Bill Clinton) wedded to a devotee of Gates—a bit more genteel, as hinted by its logo of a gent in a top hat. Jack Stack serves tasty ribs and brisket in a more refined setting (cloth napkins!), and contest-winner County Line just launched a second location in the entertainment district called Power & Light.

A couple of newbies are shaking up tradition with a contempo style of ’cue, leading off with Q39, dream-come-true of a big-time contest winner, as evidenced by a wall of blue ribbons. Here, a mountain of ribs, brisket, sausage and burnt ends comes sided with choices like white bean cassoulet and coleslaw infused with apples. Same for Char Bar, where, to side my brisket sandwich I chose kale-pecorino slaw (told you!) and a carrot-raisin-cabbage mix, following server Shannon’s tip (“You’re gonna love me for recommending this”). Char Bar even grills jackfruit to welcome vegetarians to the party.

EJ’s debuted by a classically trained chef, who returns to his roots with ’cue aplenty, catfish, and that Southern standby, meat & three. I succumbed to his primo brisket and burnt ends, sided by modern threes like Parmesan-squash casserole, fried green tomatoes, and (not a three but an irresistible fourth) bread pudding with Bourbon sauce. 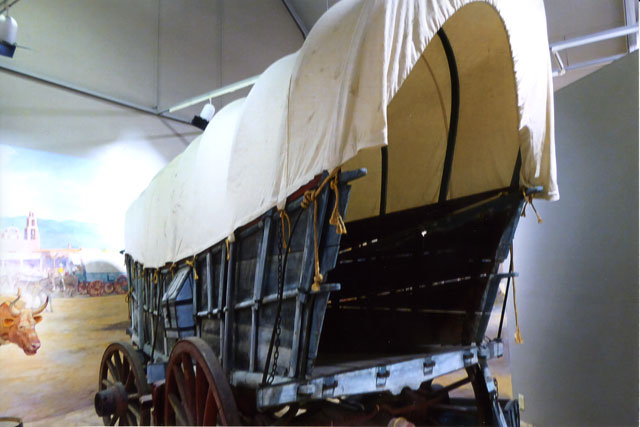 A covered wagon at the National Frontier Trail Museum in Independence. Photo by Carla Waldemar

But KC doesn’t live on bones alone, not by your James Beard medals. Corby Garrelts, a Best Chef Midwest winner for Bluestem, recently added Rye to his repertoire, showcasing “food I grew up on. It’s actually OK to like these things again.” Case in point: his best-selling fried chicken. Chicken and dumplings. Hush puppies. Livers and gizzards. Quail with corn bread pudding and braised greens. Pies are an old-time religion here, as worshipers of his banana cream and lemon meringue wonders do swear.

Antler is a sweet storefront where small plates rule: carrot salad with lardo and hazelnut pesto; agnolotti pasta with savory chestnut cream; cavatelli noodles in robust lamb ragu; scallops aside rutabaga schnitzel and red-eye aioli. Black Dirt opened just weeks before my visit, but they’ve already got it pitch-perfect with small plates such as a Missouri Caesar (croutons of breaded fish); scallops paired with grapefruit and cauliflower; duck fritters jumping with poblano cream; and octopus gone retro with Green Goddess dressing. Tom’s Town Distilling Co. not only conjures up classy cocktails in a Prohibition setting, but offers tours with tastings of its premier spirits. Nearby Hotel Indigo, also brand-new—a chic makeover of a railroad office, now sporting velvet fainting couches—charmed me with a breakfast menu highlighting Eggs Bennie with crab cakes and asparagus. 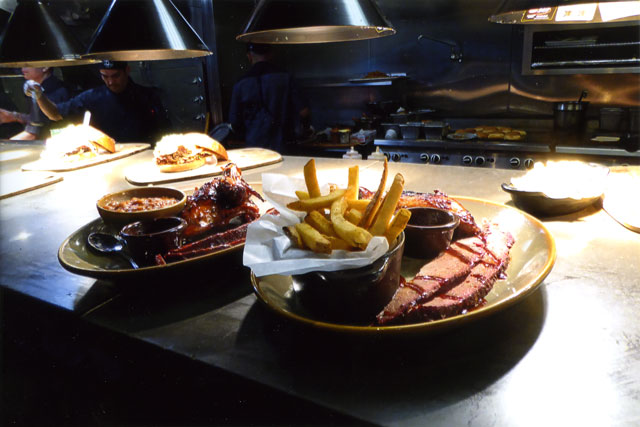 From there, hop the new, free (!) streetcar to River North, to patrol the marketplace’s food stalls, ranging from Indian to Brazilian, beignets to cannoli, and produce touted by an ardent Italian nonna as “sweet, lotta juicy.” Peer into Dutch Market for all things over the top, including a “Move, bitch” bike bell and a towel declaring “As a matter of fact, I was raised in a barn.”

Hop the rails again to the Crossroads, the sexy SoHo (and boys’ town) of the city, to patrol its indie galleries and shops. Continue to the Union Station stop to explore the station itself, vast as Grand Central and just as lively. Nearby Crown Center is home to many of the city’s creatives, employed on Hallmark’s 75-acre campus. Free tours spell out the story of the greeting card company launched in 1910 by J.C. Hall from his room in the Y. Stroll along a timeline of greeting cards (including those by Grandma Moses and Norman Rockwell) and decorated Christmas trees.

Across the street, the iconic tower of the World War I Museum (the only one in our nation) offers a 360 view of the city. The museum is so engaging that a ticket includes a second visit. Join a tour that circles onward from 1914: weapons, newsreels, propaganda posters and warfare in the trenches, where each side lodged, stalemated, for four dreadful years. Gas warfare, machine guns, bomb attacks, submarines: more firsts. Accounts climax with the U.S. entry in the war’s final year, before a last exhibit, which asks, “Is peace possible?”

A proposed expansion of the streetcar line may stretch to Country Club Plaza, a vanguard shopping enclave when launched in the ’20s, with homage to Seville, Spain: tiles and fountains galore. From there, it’s an easy stroll to the Nelson Atkins Museum of Art, whose lawn sculptures includes Claes Oldenburgh’s enormous shuttlecock. A new extension hosts a spectacular gift of 29 mostly Impressionist works from a private collection, including never-seen paintings by Renoir, Degas, Matisse and Van Gogh interwoven with the museum’s existing collection. Recently opened: “The Big Picture,” showcasing photos donated by the Hall family and Hallmark’s collection—historic Steichen and Lange to moderns Diane Arbus and Cindy Sherman. 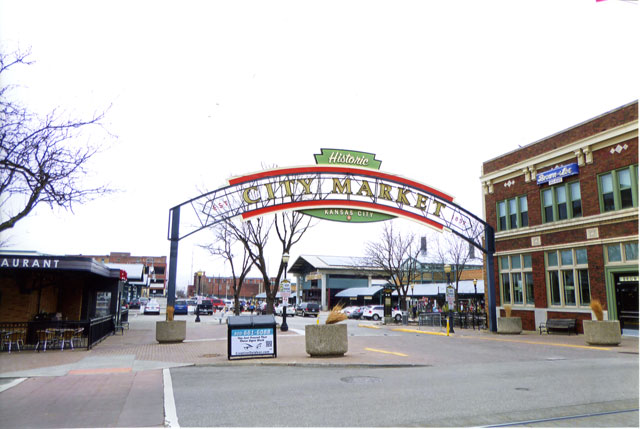 An Uber hop leads to the National Museum of Toys and Miniatures’ collection, which can be captured in one word: enthralling (adult visitors far outnumber kids) with scores of tiny mansions exactingly built on the scale of 1:12. Peer at a candle the size of a pin; tiny doors with tinier hinges; miniscule drawers that open; a cello strung with human hair. Continue upstairs to ogle toys through history (including Cracker Jack prizes)—china dolls to Raggedy Ann and Barbie. The first Tinker toys and Lincoln Logs.

A vibrant slice of KC history is celebrated at 18th & Vine. That intersection was the beating heart of its Black community, with its heyday in the ’30s. Today it celebrates two side-by-side museums: the Negro Leagues Baseball Museum and the American Jazz Museum. The Leagues flourished from the ’20s to the ’50s when ballplayers, like the famed KC Monarchs, were heroes: teams of Black players who—during segregation—were forbidden to travel and dine in white enterprises. Remembers one, “We’d often ride all night, and hungry.” And the crowds went wild. Recalls an old-timer, “Everybody would get dressed to the nines to go to the ballgame.” Local Buck O’Neal made history as the first Black coach in major leagues in 1962, joining the Chicago Cubs. KC native Jackie Robinson famously integrated national leagues in 1947…and those new opportunities put the Negro League to rest.

The American Jazz Museum celebrates Blacks who performed at 18th & Vine, from Duke Ellington and Count Basie to Sarah Vaughan. A film recounts a later successful boycott of downtown establishments, where Blacks couldn’t try on clothes nor eat at lunch counters.

For more of that can-do history, head to Independence, half an hour and many decades distant. Here, the National Frontier Trail Museum is celebrating the 175th anniversary of the Oregon Trail, which took off around its courthouse, crammed with covered wagons, hucksters and brave (or foolish) pioneers. The museum’s display of diaries spells out ensuing hardships with accounts like, “Say to all my family: Stay home.” Later, Harry Truman became his hometown’s hero. Visit his home, the Truman Library, the haberdashery shop where he toiled. Or head to the jail where flamboyant outlaw Frank James held court. Something for everyone—and that’s KC’s lure. To plan your visit, check out www.VisitKC.com.