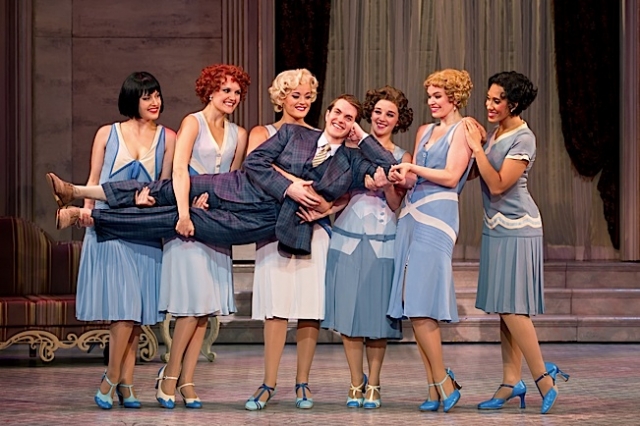 Never has “silly” been so splendid! Nice Work If You Can Get It is currently electrifying the Ordway stage with music and lyrics by George and Ira Gershwin and some of the snappiest comedy you’ll ever see. This extremely lighthearted spoof of a clueless rich guy and a street-smart female bootlegger is a deliberately and beautifully cartoonish spin on American aristocracy, underground economy, vice squads, and Prohibition in the 1920s.

But most important of all, of course, it asks that urgent question: can true love win out when a rich boy and a poor girl face insurmountable odds?! This is, after all, an example of forbidden love….. 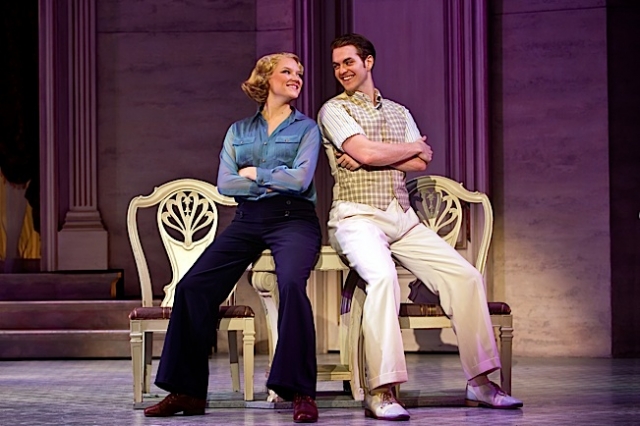 Kathleen Marshall has directed some of the most impeccably timed and paced madcap comedy you’ll ever see. No wonder she was nominated for the 2012 Best Director Tony and the show was up for Best Musical. The large cast never misses a beat, whether it’s comic or music. Zingers fly like fireworks. Mariah MacFarlane as bootlegger Billie Bendix is gritty and butch but sings like an angel. As light as the show is, she reveals a substantive sense of how the character wrestles with her feelings for rich guy, Jimmy, while at the same time knowing he’s giving her gang cover from the feds which keeps them all from getting busted. In other words, covering their rear ends. But then is Jimmy even bright enough to know how he’s helping them?

Alex Enterline plays Jimmy. This performance is so wonderfully vapid that you’ll fall in love with the guy in spite of yourself. Jimmy’s fiance, the narcissistic Eileen Evergreen, is a spoof in and of herself of iconic modern dancer Isadora Duncan. Rachael Scarr delights in the role, whether she’s being snooty, denying Jimmy permission to touch her, or flowing with her goofy, unwieldy dance techniques. 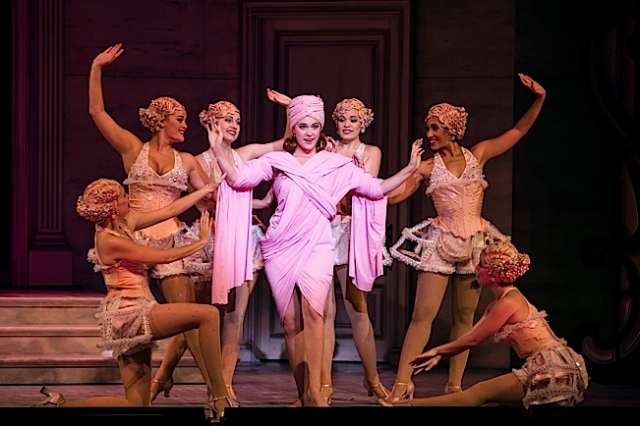 And to give you a sense of how outrageous this show gets at times: as Eileen is ending her four plus hours bath, several beautiful leggy women, followed by some dashing sculpted men come out of the King size bathtub to dance and dress her. Then there is an utterly ingenious section within this already ingenious section, where a giant pink cloth is harmoniously and titillatingly draped around Eileen’s naked body (which we never actually see naked) and it becomes a stylish outfit. Take note here that Marshall also choreographed the show. (Associate David Eggers has obviously been keeping her direction and choreography wonderfully intact for the national tour.)

That said, it’s Stephanie Harter Gilmore who practically steals the show at points -and we love her for it- as the puritanical and prissy Duchess Estonia Dulworth, foundress of The Society of Dry Women. Her rendition of By Strauss where she counters the prevailing flapper culture is simply fabulous. It gives 2014 audiences a taste of how the Culture Wars were playing out in the 1920s. Yes, it’s a caricature, but in our era of Sarah Palin and Michele Bachmann it’s clear that there is a caricature aspect to many people. 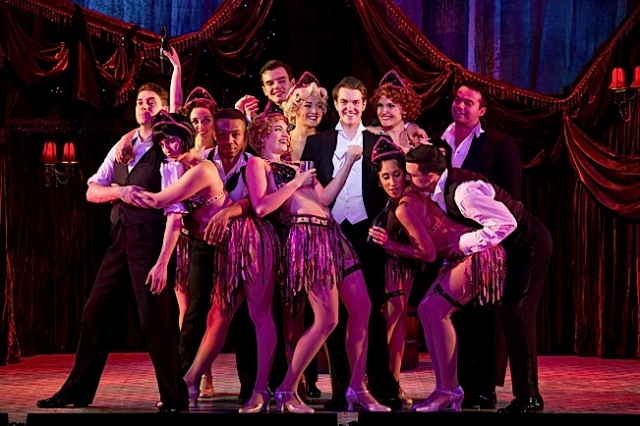 Period costumes by Martin Pakledinaz fit the roaring ’20s perfectly. David Chase’s music arrangements and Charlie Reuter’s music direction are charmingly blended into the staging of Joe DiPietro’s sparkling book (theater term for the script of a musical). Note that DiPietro was inspired by material by Guy Bolton and P.G. Wodehouse. It all comes together in one marvelous musical comedy. Not to be missed.

Note: this show has one of the most wonderfully set up jokes about the two major US political comedies ever put to pen. Again, Marshall’s actors’ timing is just exquisite. 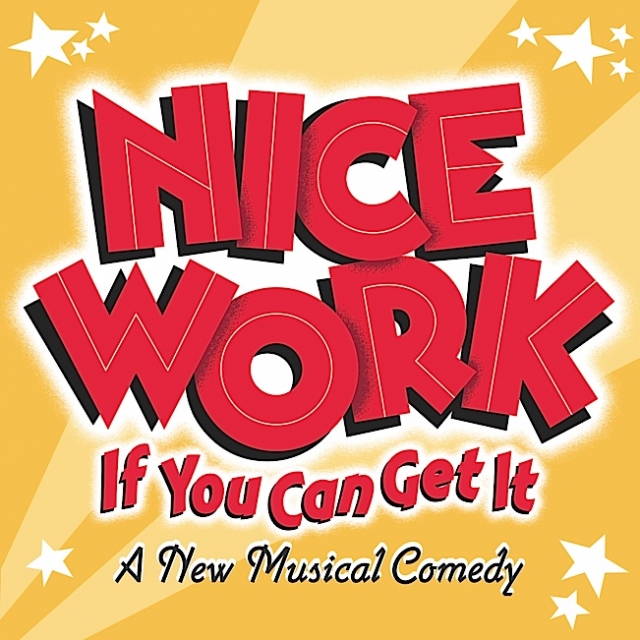