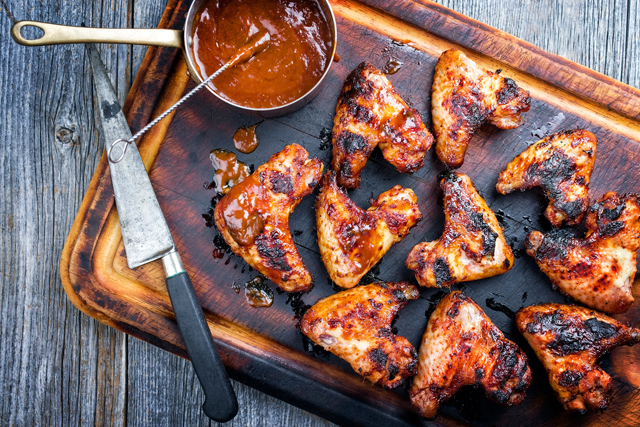 Kansas Citians don’t need fancy food writers to tell them what to eat: Barbecue leads the basic food groups in this smokin’ city, balanced by coleslaw, fries, cheap white bread and sauce. Stray beyond that to, say, Caesar salad, and folks will turn frostily polite, making allowances for a northerner but never quite forgiving the social breach.

Barbecue isn’t for prissy folks—don’t expect a fingerbowl on the table—nor for lazy louts who simply throw a porterhouse on the grill: oh, no. Barbecue means long hours of hickory smoking and a sizable investment in sweat equity in the mission of turning the toughest, meanest, butt-ugliest cut of meat—the butt—into morsels of pork perfection that could cause a Michelin rater to turn in his stars and concentrate on what real eating’s all about.

Kansas City is the art form’s epicenter. The city boasts well over a hundred barbecue joints—more per capita than anywhere else on the planet. The first commercial shack was launched by Henry Perry back in 1907…and the rest is culinary history.

Each shack has its disciples, and when it comes to barbecue, Kansas Citians are loyal to a fault. Bar fights break out as to who has the best brisket, ribs, burnt ends, hot sauce, you name it.

KC-born food writer Calvin Trillin brings a journalist’s insistence on accuracy to his reportage. It’s not true, he admits, that Kansas City has the best restaurants in the land—only four out of the top five, and they all serve you-know-what. Here’s a guide to some of my own particular favorites.

Arthur Bryant’s is the granddaddy of them all. Arthur learned the craft from Henry Perry (as did George Gates—see below), and the pit he launched sets the standard by which all others are judged. It’s the antithesis of fancy. “That’s not barbecue when you get them plush seats and dark interiors. That wouldn’t be no grease house that way,” Arthur early on proclaimed. Instead, it’s a great social leveler—overalls bumping elbows with business suits. Harry Truman ate here; so did Jack Nicholson and Robert Redford, Bill Clinton and Jimmy Carter; they even named a sauce for him.

By 11 a.m., its linoleum-topped tables are filled, and there’s a line from the order counter out the door and down the block. There’s no menu, just a sign on the wall, right beside the pit—hotter and darker than anything Dante ever dreamed of. Here the ribs smoke for hours until they’re tender. So does the brisket, which sells even better. It’s sliced as thin as tissue paper, then piled onto slices of Wonder Bread. Add an order of fries if you haven’t had much to eat since Thanksgiving, and you’re in business, provided you can lift the tray. Napkins are too flimsy for this serious grease. Instead, rolls of paper towels anchor the tables. None of this “Have a nice day” from the unsmiling counter staff. Simply have a great feast.

Kansas Citians hails Ollie Gates as “king of barbecue in a city where barbecue is king.” At age 14, Ollie stepped into business with his father, George. Today, Ollie’s kids and grandkids also have enlisted and the number of venues has multiplied, all bearing the iconic logo of a top-hatted, high-struttin’ dude.

They’re run with the precision of a drill team, trained to shriek “Can I help you?” within, oh, three seconds of your arrival in this cheery family setting. The trademark of a Gates experience is the enviable ribs, smoked over hardwood until they surrender and hang limply from a cooking fork—a sign they’re mellow. Oprah and Low Rawls are fans. President Clinton once diverted a motorcade so he could partake.

Lil’ Jakes was run by Danny Edwards, son of Q-king Jake Edwards, who taught him all he knew. A pink concrete porker stood guard in the parking lot, which was far bigger than the joint itself—a diner of two counter tables. (Thus the slogan “Eat it and Beat it.”) Gentrification of the neighborhood spurred Danny to relocate onto Southwest Boulevard, this time under his own name, Danny Edwards Boulevard Barbecue, serving, he proclaims, “smoky goodness with a heaping side of tasty.” And yes, the concrete pig is still onsite.

The meat is cooked overnight in a hickory-fed smoker. And it’s good. Make that, worth the drive. From Alaska. Choose spareribs—long end, short end or full slab. But what’s really put Jake on the map are the burnt ends—the crispy, brown edges of brisket. Each roast has just a small portion of these overdone tips, but Danny refuses to stoop to mixing in snips of the pricier brisket, as some ribsters do, so when he’s out, he’s out.

Oklahoma Joe’s is positioned in a strip mall between a gas station and a liquor store (some call it one-stop shopping), just across State Line Boulevard in Kansas City, Kansas. A near-blinding lineup of gold trophies indicates that owner Jeff Stehney knows a thing or two about his craft. When he decided to turn his contest-winning passion into a full-time pursuit, he made himself a promise that his standard wouldn’t slip. If the meat’s too dry to serve, he doesn’t serve it.

The Carolina sandwich, packed ceiling-high with thin-sliced pork topped with spicy, vinegar-laced coleslaw and a kosher pickle—a break in barbecue tradition—and then slapped on a paper-covered tray, gets top vote—except for whatever day burnt ends are spotlighted at Joe’s. 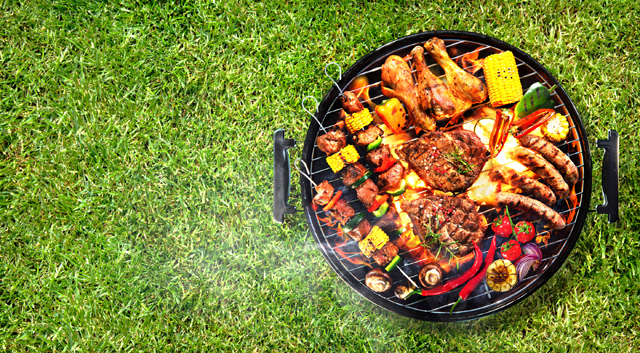 Oh, you’re all gussied up and insisting on actual napkins? Then head for classic standby Jack Stack, turning out hickory-smoked ribs and brisket in a gentrified setting. No surprises, but ribs tender as a Valentine delivered by actual trained waitresses.

Today’s Young Turks of the pit are challenging the Old Guard with contempo tweaks on the process, and product. Step into Q39, a modern, amply-sized setting where office workers escape their cubicles en masse at noon to chaw upon platters usually reserved for Christmas turkeys. It’s newly launched by another competition winner (as a wall of medals testifies) as a ’cue-lover’s playground in which to sample oak-fired everything: ribs, pulled pork, brisket, those coveted burnt ends, and—new!—chipotle sausage, served with modern sides like apple-infused coleslaw and white bean cassoulet.

The folks behind Char Bar believe in diversity. Thus you’ll discover smoked jackfruit on its trendy menu, prompting more than grateful vegetarians to salivate. Add in updated sides like carrot-raisin or kale-pecorino slaw and you’re good to go.

EJ’s has debuted in a sort-of renovated stretch down by the river, launched by a classically-trained chef who abandoned his toque to return to his roots with ’cue aplenty, plus catfish and that Southern standby, meat & three. Best seller: his primo brisket and burnt ends, sided by modern threes that include Parmesan-squash casserole with biscuit crumbles, fried green tomatoes, and (save room for dessert!) bread pudding with warm Bourbon sauce.

Barbecue is meant for lunch, according to local practice. Except at K.C. Masterpiece, king of Q at Country Club Plaza. This is no joint: It’s a full-blown restaurant with a host to lead you to your table and mints on the way out. And if you’ve had your fill of brisket, here they’ll serve you a hickory-smoked chicken (and even a Caesar salad). In another break with tradition, the famous Masterpiece sauces that founder Rich Davis now markets across the nation come slathered on top of the meat.

The Kansas City Barbecue Society serves as the founding fathers-cum-Scripture- writers of this old-time religion. Their annual American Royal Barbecue contest is the World Series of barbecue competitions, entered by ardent amateurs from all around the country, with team names like Any Pork in a Storm, Beverly Grillbilllies, Don’t Burn the Beer, Squeal of Approval and others unfit for this magazine (816-221-8180 or www.americanroyal.com ). For info: www.visitKC.com/bbq.