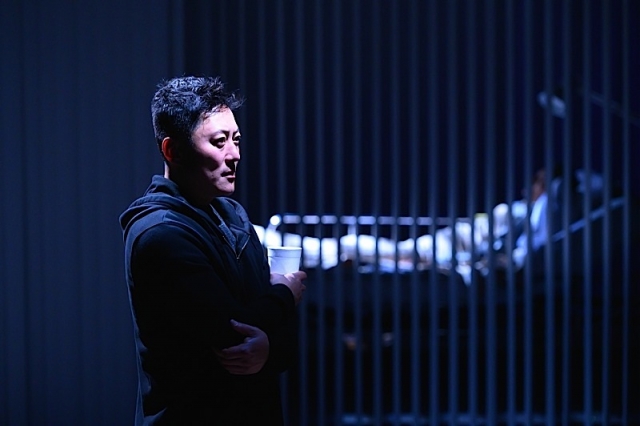 Playwright Julia Cho has discovered connections between the memories we have about food and the way we live our lives, as well as our dying, in Aubergine, now in a memorable production on Park Square Theatre’s Andy  Boss Stage. It’s hard to imagine that a title that means ‘eggplant’ (derived from French) is a powerful play with subtlety on a level seen too little of since Tennessee Williams. Yes. Her writing is that exceptional, especially in our post-Kushner era where broad strokes have come to be the easier polemical standard of so many playwrights. In contrast, Cho reveals with nuance, the aching insights about human suffering not typically discussed or even acknowledged. Her low-key world not only touches heart and soul, but provides wisdom. 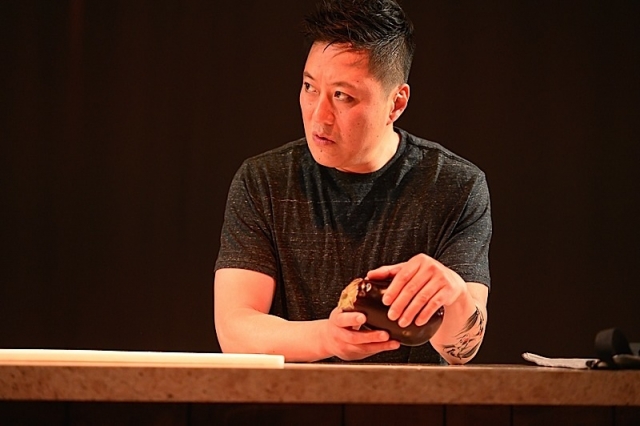 Like another classic American playwright, Lillian Hellman, Cho is a woman who impresses with frank, complex, and empathetic insights about men minus battle of the sexes vitriol. Aubergine centers on Ray, a Korean-American gourmet chef wrestling with turbulent emotions as his war veteran father’s cirrhosis is fatally  spreading. In emotionally supporting Ray while his father fades in and out in hospice, the major woman in his life, Cornelia, evolves toward a richer understanding of men and of her own inner greatness.
There’s a common belief that when those close to us are on their way out, that we must make peace with them to bring about what’s known as ‘closure’. It’s a laudable and advisable aim indeed. However, if we don’t or frankly, cannot do that, we ourselves and/or others may mark us as emotional failures. But what happens when there is so much about the one dying that the one who will be left behind actually cannot know about? What if we can only wonder over what was beneath the personality of loved one leaving this plane of existence? What about the unknowable—when critical details can simply just not be known? 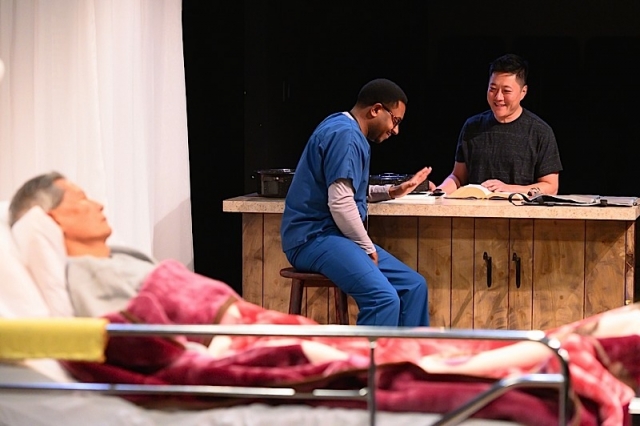 Moreover, what if we only see the dying or dead person’s flaws and the wrongs they may have done to us? To add fuel to the fire, what if we assume that they too had an equally negative view of us before they passed. (Crucial key word: assumed.) And tragically, what if all that becomes the sum total of our memory of them?
This is the predicament that Cho’s protagonist is left with. Ray (Kurt Kwan) exemplifies the fallout from divisions that so often happen between first generation immigrants and their offspring who have gone on to assimilate. Frequently, the rigid expectations held by elders are simply impossible and unreasonable for the younger generation to align with in a national context so very different from their parents.
Cho penetrates an utterly tragic divide between fathers who cannot apprehend profound differences between themselves and their sons – sons who simply and naturally don’t and more importantly, cannot fulfill those expectations. Sometimes it’s that simple: expectations simply cannot be fulfilled. Worse yet, Cho observes that sons sometimes don’t even have the basic information to understand what lies beneath their fathers’ expectations. The playwright exposes that divide as oceanic: Ray is a gifted creative genius of a chef, but to his father (Glenn Kubota), who only eats a very simple diet, his heterosexual son’s gift and choices as effeminate, less manly, and not in keeping with the work men are traditionally supposed to do in his paternalistic eyes. 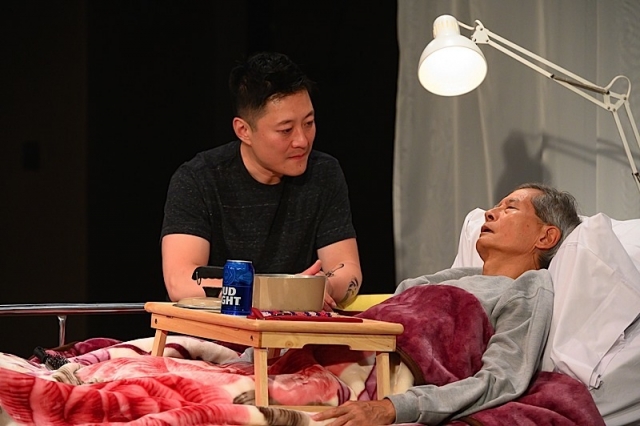 Kubota makes what could be an unlikable character, someone we come to deeply care for. The actor gently devastates in lucid moments where his character relates in ways only the audience is privy to, what he has experienced in a life fated to turbulence that few, if any humans, could ever prevail over. We are made to understand the roots of his callousness. Cho never resorts to misandrist invective. She’s a probing truth seeker and gives men a fair shake (and a compassionate one). 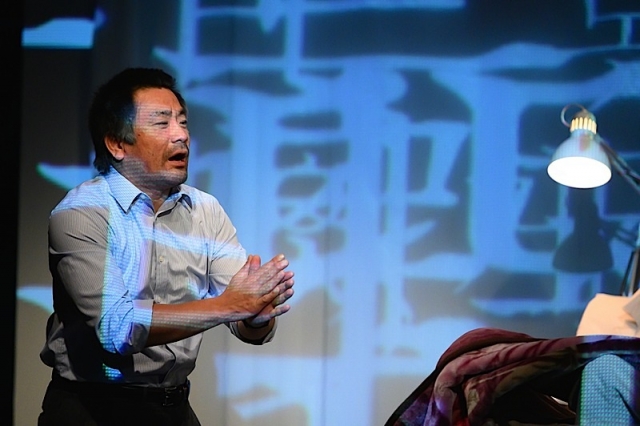 Kwan’s portrayal is a painfully accurate window into the predicament of an immigrant’s son. He elicits the volatility, the anguish, and a desperation in portraying a man who feels ineffectual during those final days when a person yearns for some final deathbed connection so that closure can be actualized.
Cho demonstrates mastery as her script unconceals mysteries of the characters’ lives. These emerge upon the audience without bluntly signaling their presence beforehand. Aubergine is a play with viewpoints that delicately take us by surprise without exhortation. A clash between father and young son over food.  Military memories of doing without vitally necessary supplies. The gaping loss of a mother and wife. Just to name a few. (Don’t worry. These are not spoilers.) 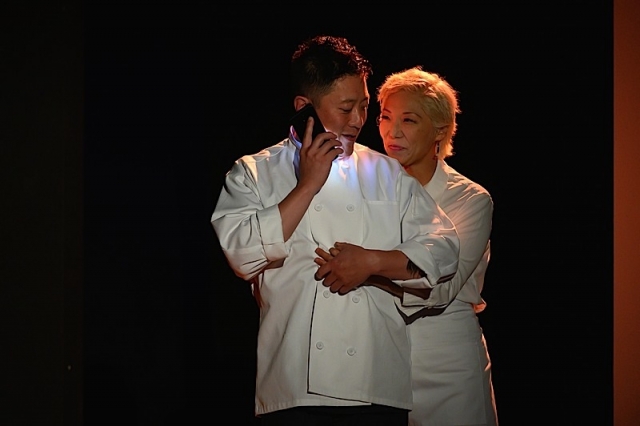 Director Flordelino Lagundino, Park Square’s new artistic director and the director of Aubergine, has splendidly intuited the viewpoints and translated them into dramatic gold. His sensitivity is apparent through the rendering of all actors’ performances.
Sun Mee Chomet as Cornelia, the woman Ray has loved and loves but has miscommunicated with, movingly portrays the role with emotional range that powerfully advance from bristling anger to deep compassion. 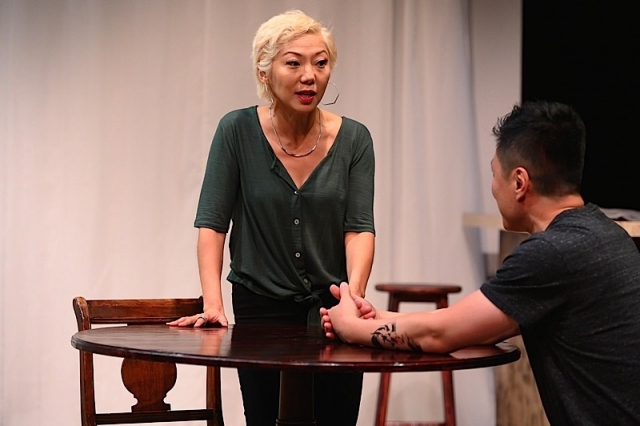 Song Kim endears and enchants as the lovingly mischievous uncle who serves as a kind of mystical, yet earthy guide for Ray to navigate through his anguish. He evokes an utterly sublime musical moment that lingers beyond the time you watch the performance. 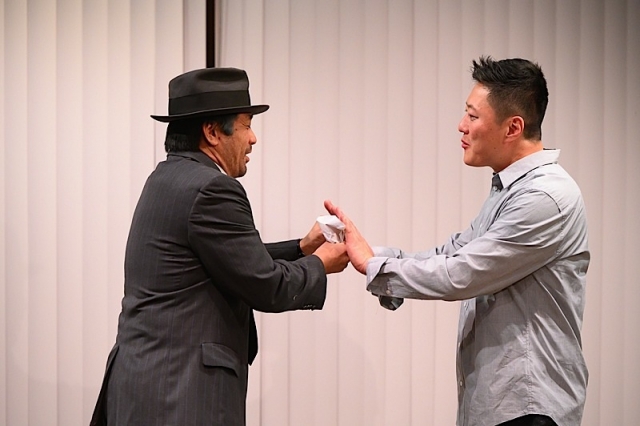 Darrick Mosley and Shanan Custer enhance with vivid portrayals in roles of those outside the Korean nucleus of the play. Their contrast further radiates Cho’s brilliant overview. The creative team has nicely shaped a spare contemporary atmosphere so that our focus is drawn right into the actors’ emotions: Deb O’s set design, Amber Brown’s costumes, Matt Otto’s sound design, and Kathy Maxwell’s touching video design.
Note: Cho is not in any way putting down the very real need for people to find closure in relationships. She simply dares to point out that sometimes, such breakdowns are so daunting they cannot be surmounted. This is something that Cornelia comes to understand and which actress Chomet realizes so effectively in her role.
Aubergine
Through Oct. 20
Park Square Theatre,
651-291-7005
www.parksquaretheatre.org