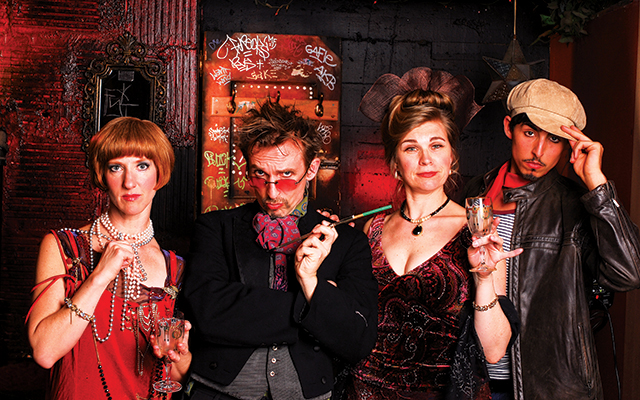 Joe Chvala has scaled the heights of the Twin Cities performing arts scene. He navigates the experimental and the mainstream with joyous assurance as both a choreographer and as a director. Chvala’s innovative Flying Foot Forum percussive dance company has played in the U.S., France, and Russia. He has directed the Guthrie Theater’s A Christmas Carol three times, is putting the finishing choreographic touches on their production of The Music Man, and has choreographed the Children’s Theatre’s current staging of Peter Pan.

Growing up in Madison, Wisconsin set the stage for a career in theater and dance. At age 12 Chvala was cast in the title role of Oliver! at a community theater. He had rigorously practiced the show’s tune Where is Love? and obviously made a strong impression at auditions. From that point on he played Hansel, Pinocchio, and Peter Pan at the Madison Children’s Theater. He says, “I played all the Lost Boys in the world.” As a teen he also played in more mature works such as the lead in the pacifist drama Summertree and the Emcee in Cabaret.

Chvala recalls, “I remember my first inclination to make theater came from a desire to create, in the real world, the worlds in my imagination, because I knew that I saw the world in a different way and people would love to see some of the things I saw. I was also a bit shy as a kid. It took a long time for me to find the words or the nerve to explain the complex things I thought. So theater was a place where I knew how to communicate the large ideas that few had the patience to listen to in the real world.”

Chvala went on to enroll at the University of Wisconsin, Madison where he earned a BS in English Education. This advanced his understanding of literature which is vital for a theater career. He points out the importance of “being able to analyze. I’m always in awe of novelists.”

During college he auditioned at Wilson Street East Dinner Playhouse to be a singing waiter but found himself cast in the role of Lucky in Dames at Sea. Chvala went on to enhance various Madison stages during his college years. Acting credits from those years include Stop the World – I Want to Get Off, Child’s Play, a Nixon spoof, Trust Me, and Ah, Wilderness! 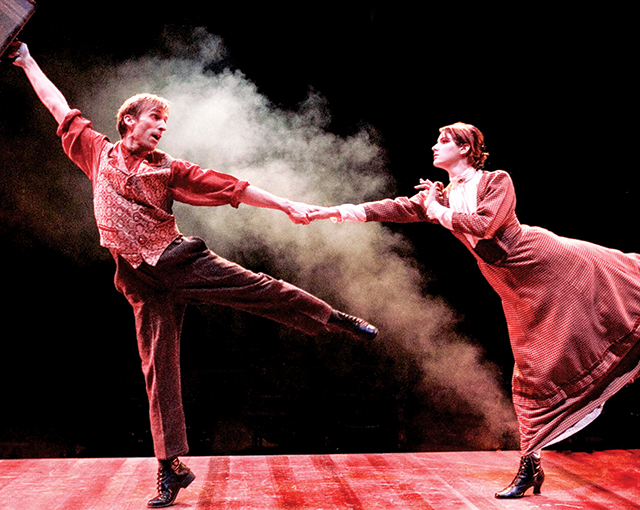 But just as consequential, if not more, was that Chvala, as he says, “got hooked on music theater.” So he instinctively enrolled in jazz dance and ballet classes at UWM and had long loved the folk dancers on Madison’s Library Mall. He says, “There is a tradition for that in Madison. I was very intrigued by that. It was beautiful and wonderful.”

After leaving UMW Chvala taught high school in Minocqua, Wisconsin for two years. He started their drama program, directed six shows there, and saved up to move to New York where his goal was to work as an actor. He studied acting at Berghoff Studio with Bill Hickey and studied tap dance independently with Bob Audi, who taught Mandy Patinkin and Joel Grey. He also trained in traditional Broadway hoofer style and rhythm tap with Brenda Buffalino. Chvala points out, “I wanted to find my own way. I have encouraged my students to study with a lot of different people, not to be completely imprinted by one mentor. I think that’s pretty important for someone who wants to create. When I was living in New York if something sounded different I would go see it. It was the ’80s! Really exciting and fun. I would just soak it up.”

Living almost seven years in New York, Chvala got much work on cruise ships and in dinner theaters. He shares, “Had I not been in a relationship I probably would have left sooner. I wanted to do my own work and I wanted to find a place easier to do that.” Then, as fate would have a it, a friend playing in 42nd Street on Broadway told Chvala that another friend was trying to get out of a high school teaching contract in Sweden but had to have someone replace him. Chvala jumped at the chance and rather than staying for one semester he ended up staying two years.

For Chvala, Gothenburg, Sweden was a consciousness shift. He reflects, “Seeing such a different way of approach, the world was a great thing. Being gay outside my own country, I was sort of liberated. Not to have the eye of your society all the time. I was on the outside. I was an American teaching art forms that are American — musical theater and tap. I probably would have stayed there forever if it weren’t for not seeing family.”

When Chvala returned to the U.S. he says, “I became very political about being gay. I started to go to Gay Pride. I’d never gone before. I had been in a relationship with a man for four years but my parents didn’t know. They knew him but — blinders — they didn’t know we were in a relationship.” However, his parents, and whole family, became accepting of Chvala’s orientation. He feels this was destined as his father’s family was very friendly with a gay couple who owned a drug and gift store in their small Wisconsin town.

In 1990 Chvala came to Minneapolis and was cast in Minnesota Opera’s staging of My Fair Lady, a big show with lots of artists that placed him in the thick of the Twin Cities’ vibrant performing arts scene. He remembers thinking, “People from theaters all around would be there so you would get connected quickly.” 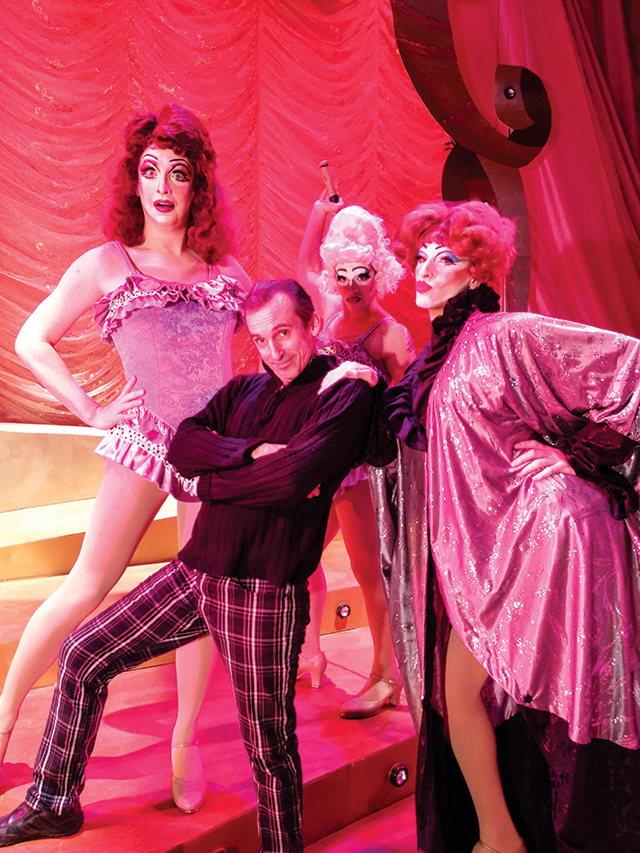 In those early Twin Cities years Chvala was a substitute teacher for Bloomington public schools, began teaching tap at the U of M, and sang and danced for a year at Chanhassen Dinner Theatres. Earning a slot in the Walker Art Center Out There Series’s Late Night Showcase he brought forth his percussive dance aesthetic and performed with the beguiling drumming ensemble, Savage Aural Hotbed.

In 1991 Chvala formed his Flying Foot Forum percussive dance company, which emerged on a wave at the time when STOMP and Savion Glover were putting their stamp on the world dance scene. Chvala describes percussive dance as “any kind of dance that makes percussive or rhythmic music by the actual act of dancing. Flying Foot Forum uses all sorts of modes of producing music while dancing — we use vocalization, we stomp, we clog, we slap ourselves and others. We hit other things and instruments. All of this is under the umbrella of percussive dance for me.”

That percussive originality blended with his eclectic understanding of dance in general has clearly broadened his demand. Children’s Theatre Artistic Director Peter Brosius points out that Chvala “creates works of such invention, precision, and surprise. I love working with him and watch how he layers his work with delightful detail. He truly fills a stage with energy and passion. His knowledge of the world of dance is so vast and his imagination is prodigious.”

2005 was significant. Walker Art Center, the most prestigious contemporary art center between the west coast and Chicago, if not New York, had commissioned what would become his majestic Between the Fire and Ice in collaboration with transcendent folk vocalist, Ruth MacKenzie, and again, Savage Aural Hotbed. That year he also advised on movement for the Guthrie’s Oedipus.

It was also the year of Fireball. History Theatre Artistic Director Ron Peluso recalls that “Joe was a major collaborator in this project and the lead artist. He worked closely with our playwright Roger Neiboer and composer Peter Ostroushko to create a beautiful dance theater piece in which he was director, choreographer, and actor. His vision for the show was true to History Theatre’s mission: as we took this tragedy of ‘the Hinckley Fire’ and found humor, courage, and inspiration in the characters that Roger and Peter had crafted. Joe’s imagination and combination with his openness to collaboration made the show work on so many levels.”

In the years since, Flying Foot Forum has continued to flourish. Chvala’s directorial hand for A Light in the Piazza and La Cage aux Folles has helped elevate Bloomington Civic Theatre as arguably the region’s top musical theater. His original musical on war-torn Bosnia in the 1990s, Heaven, co-created with contemporary music legend, Chan Poling, was brutally frank. His A Christmas Carol stagings are appreciated for their vivid grasp of Dickens’ socially stratified London. You get the meat, not just the sugar.

Now in his late 50s and happily single, Chvala is blossoming into new successes. He says, “One of the best things about being gay is the liberating effect of being born different. I realized that for me it made me feel free to make it up as I went along. The combination of that freedom and being single has allowed me to follow my inclinations and to be open to the serendipitous opportunities in my life. My first grade teacher said I daydreamed a lot. I love people but I have always felt a need to spend time alone thinking and daydreaming, so being single works well for me. I think being single also made me develop a lot more significant friends and closer relationships with my family than I would have if I’d had a partner. One of the things I’ve loved about being gay is that you can make your own life. You can make your own rules.”