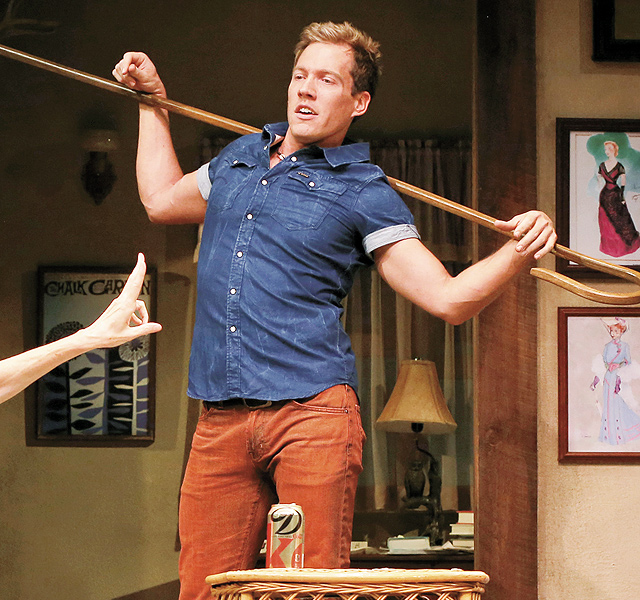 Joshua James Campbell has played major roles in the area premieres of some of the hottest contemporary plays and musicals: Grey Gardens, a joint Ordway-Park Square production, The Full Monty with Theater Latté Da, and now last year’s Tony Award-winning Best Play, Vanya and Sonia and Masha and Spike at the Guthrie.

If you are unfamiliar with Campbell’s work you might wrongly assume that he’s just a masculine pretty boy. But if the ghost of Tennessee Williams was lurking around the Jungle Theater in 2010, Campbell’s portrayal of the iconic role of Tom in The Glass Menagerie would have pleased him.

Luckily, I was able to get an interview with the busy Campbell even though he was opening at the Guthrie and producing and directing Failure: A Love Story for the Minnesota Fringe Festival. He shared some thoughts on his Guthrie debut in which he sheds clothing at certain times and in what may well be Christopher Durang’s best play yet.

JT: You play Spike in Vanya and Sonia and Masha and Spike at the Guthrie. He’s in shape and buff. It reminds me that you played the lead in Theater Latté Da’s The Full Monty which is about sexy male dancers. These are roles that show off—and I don’t mean that negatively in any way—both your exceptional acting talent and your looks. I’ll just be honest. You’ve got what it takes, as they say.

JJC: Ha! It’s a bit scary and vulnerable to expose your body onstage, just as vulnerable as exposing emotions. I’m a former husky child so I’ve had to work to get fit. I love being active. Any exercise turns into a sort of meditation for me, or I can let my mind wander.

JT: The play is a kind of take off on the style of playwright Anton Chekhov and has Christopher Durang’s signature wacky irreverent style. That must be something else to wrap your mind around!

JJC:  Joel Sass is an amazing director and he was so great to work with in this show. He allowed us the opportunity to play. This show is very fun and we had to try 1,000 options for each moment before we figured out the correct option. Joel let us do that. He is very smart and created a fun room where we could explore and come up with crazy ideas and play.

I did hurt myself in a rehearsal once because I was playing a bit much. I was up on two chairs—if you’ve seen the show you’ll know what moment I’m talking about—and I decided to try the “Jean Claude Van Damme leg split” by pushing the chairs apart with my feet. Well, I’m flexible, but not that flexible. I definitely pulled my groin. But I’m glad I got to play with all the fun physical choices in the play. Some of them are better left to Mr. Van Damme, however.

JT: Your character, Spike, has a very free view of sexuality.

JJC: Spike is a man who wants to be loved by all. He wants everyone to be attracted to him. What’s great in his mind is it doesn’t matter if that person is male or female. He is of a generation of straight men that don’t mind if a man is lusting after him. It’s not a weird or sexually deviant thing for him. It’s just normal. It doesn’t matter. This is a comedy, so Spike’s character is a bit extreme and he actively needs to be lusted after. But we all know people like him. And I think it’s great that he really doesn’t care.

JT: And there’s an older gay character in the play, Vanya, played by Charles Janasz.

JJC: Yes. And the homosexuality isn’t treated in a revelatory way at all. The guy is just gay. It’s talked about, and it’s talked about why Spike is so flirty with him but it’s not the crux of the play.

JT: Spike is continually teasing Vanya, baiting him with his good looks. Is this out of ego, or because his been conditioned to exploit his beauty? Or what is it?

JJC: I don’t think Spike is conscious of half the things he does. In my mind, Spike has grown up attractive and fit, very different from yours truly. People have always just given him things because he is good looking. It doesn’t make him a bad person at all. He just doesn’t understand that he is getting more perks than the average person. He comes in with an air of confidence and people latch onto that.  He gets a vibe that Vanya likes what Spike is working with, so he gravitates toward that. Spike wants everyone to find him attractive, so when Vanya show signs of liking Spike, he plays with it. Spike is working the room he’s in, even though he’s not conscious he’s doing it! Charlie plays this perfectly. It’s not gross or even mischievous. Vanya just likes looking!

JT: You and Candy Buckley as your middle-aged girlfriend feed off each other’s wildness wonderfully. I also saw her in the Guthrie’s A Delicate Balance. She really pushes limits.

JJC: Candy is wonderful. I’m so lucky to be working with her. She has worked everywhere! She came into the rehearsal room with bold ideas and that allowed me to create bold ideas as well.  Candy is willing to “go there.” She can somehow be completely crazy and zany onstage, but at the same time is entirely believable. It’s very fun to watch. She makes me crack up all the time.

And the other actors are just amazing. They bring an openness and sense of joy to the room. An audience member doesn’t have to know any Chekhov to see this show. These characters are so relatable. We know all of these people. The characters onstage are just a bit more extreme. Durang has turned these Chekhovian characters into a modern day dysfunctional family.

JT: Why do you go by your first, middle, and last name and not just your first and last?

JJC: It’s what I was stuck with. I joined the actors union when I was 24 when I joined the cast of Mamma Mia! in Las Vegas. When you join you have to figure out an Equity name that no else has. There can be no two Josh Campbells in the union. I tried for Josh Campbell, Joshua Campbell, and Joshua J. Campbell. And they were all taken. Apparently mine is not a very original name!