Joseph Haj recently took the reins as the Guthrie Theater’s new artistic director, succeeding Joe Dowling who held that position for 20 years. Haj comes from the PlayMakers Repertory Company, the resident theater at the University of North Carolina, Chapel Hill. He served as its producing artistic director for almost a decade. 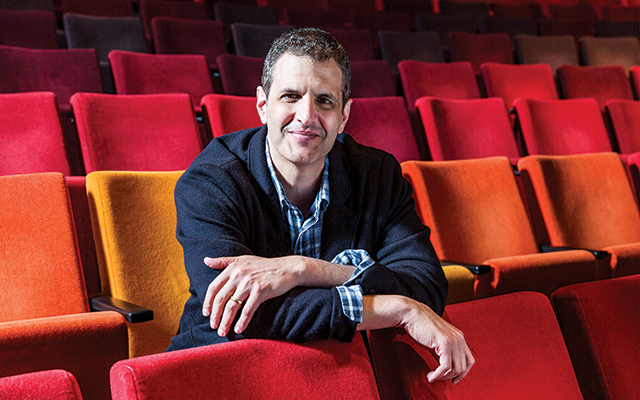 The 51-year-old Arab American will be directing Shakespeare’s Pericles and Rodgers and Hammerstein’s South Pacific for the current Guthrie season; however, his duties and responsibilities stretch well beyond directing and preparing for those two productions. He will see that the many other season productions on the Guthrie’s three stages are provided with their multiple needs.

Moreover, Haj is essentially the theater’s public face. Given that the Guthrie is the nation’s flagship regional theater he must be a master of outreach. He has already been to greater Minnesota, having visited Duluth and Rochester among other places, and has been very engaged in communication with various Twin Cities arts organizations. I spoke with Haj last month about how he sees things and what we might expect during his tenure.

I have heard you are keen on collaborations.
Joseph Haj: In this kind of job, one always looks for collaborations. I’ve spent my life in rehearsal rooms. I love collaborators. I love collaborating. It’s only been three months and I haven’t met all the artistic leaders in town but I’ve met a lot of them. And I’m such an admirer of so many of them. Many I’ve known for years and others are new to me who I’m just getting to know. But it’s an extraordinary environment. There are many, many really great leaders of many wonderful organizations and so I would welcome and look for opportunities to collaborate and to partner. It’s the early days and there’s nothing in the works. But for the moment it’s just getting to know each other and finding out what might make sense.

What are some of the differences between PlayMakers and the Guthrie?
JH: In some ways it’s not dissimilar. How does one learn about the organization? How does one identify strengths and weaknesses? How do you figure out what you want to do about those weaknesses? What’s the overarching vision? How do we set the direction toward that vision? These are leadership questions whether you’re running a $2.8 million theater or a $28 million theater.

My thinking doesn’t get 10 times different or better on account of the fact that I’m leading an organization 10 times larger. But there are, of course, meaningful challenges.

You’ve brought both diversity and tradition into the 2015–16 season. Anywhere one goes anymore, one has to balance those things into the process.
JH: I’m not sure if anywhere you go you have to balance them. But I think the Guthrie specifically does. The Guthrie can’t be an identity theater. The Guthrie can’t be only a classics theater. It can’t only be a contemporary theater. It can’t only be a GLBT theater or be an African American theater or an Asian American theater, etc. The Guthrie, sort of by mandate, [has to be] a lot of things to a lot of people. I describe it in the New York City museum analogy. If you go to the Whitney in New York you know you’re looking at American art. At the MOMA you look at contemporary art.

We have to be like the Metropolitan Museum of Art. If you want a Rothko you go to the fifth floor. If you want a Monet, that’s on the third floor. If you want the remains of a mummified cat, that’s on the first floor. We have to be that kind of an organization so we have to be a lot of things to a lot of people. So [this is] etched in this organization, the Guthrie’s DNA. It was designed to be a classics theater. Tyrone Guthrie struggled mightily in year two whether to produce Death of a Salesman because he wasn’t certain it was a classic, so there’s that. So I think we have to be making classical plays and we have to be making sure we are making work in the western European canon, the American canon, the international canon, and we also need to be making contemporary work and new work. This is all part of what we need to do.

That canon of work is dominated by white men. It’s not exclusive of course. There are many meaningful exceptions. But in the main I think we can agree that that field is dominated by white men. And the Guthrie remains committed to those stories and I think when we do, then it becomes very interesting to me through whose lens are we visiting these stories. Who are we hiring? Who is the director? Who is the scenic designer? Who is the costume designer, the light designer, the sound designer, the composer? Who are the actors? Through whose lens do we get to tell these stories?

If we say that the plays of Shakespeare belong to all of us then they belong to all of us. They don’t remain the province of just a sort of white male perspective because a white man happens to have written them 450 years ago. So it becomes really interesting to me, in the nature of these classic plays, who are the storytellers. Through whose eyes, through whose lens do we get to see them becomes a real criteria.

Can you tell me something about how you got inspired about theater?
JH: I managed to never see a play till my senior year in high school. I grew up in southwest Miami and in those days there was one theater. There was the Coconut Grove Playhouse. And I never went. It was no part of my young life at all. I was a child of recent immigrants and I couldn’t figure anything out. I realized as a parent, when we had our daughter, that so much of a parent’s job is to help a child navigate a society and cultural norms. My parents were recent immigrants. They didn’t know what those cultural norms were.

So my whole young life was filled with a feeling of otherness, of not fitting in, not knowing the rules, wondering why every other kid got the memo of how to dress and I was in the wrong clothes, or it was the wrong time, the wrong place, behaving inappropriately. I was disaffected. I was pretty angry. I was a very, very poor student, one of those kids who went to school year-round. I failed things during the year, made them up in summer school.

And then in my senior year in high school I had that one great teacher, Barbara Lowery. There was a first period drama class which sounded like a good thing to sleep through. So I signed up for it. I had no background in it at all, then knew immediately that this was something I wanted to try to pursue and it helped me. It organized the mind. I became a committed student. I got one degree, a second degree, a third degree. I went to graduate school at the University of North Carolina professional actor training program. I wanted so badly to be successful in this art form. I think it’s a fairly ubiquitous story. It’s one great teacher, one person who provides a path. And I’m forever grateful for it.

Do you have any ideas yet about GLBT issues and programming, play selection?
JH: As we think about plural voices, as we think about diversity inclusion in all of its many, many ways, of course GLBT conversations and concerns and areas of focus are strongly in our thinking as we consider future work.

Taylor Mac is coming this year. He’s a great friend. And Colman Domingo’s show A Boy and His Soul, which is very much a coming of age story of a gay man, a gay black man.

Note: If you were a Guthrie patron 25 years ago you may have seen the part of him that is a first-rate actor in the nationally acclaimed production of The Screens during the 1989–90 season and in a powerful performance as Henry Antrobus, the troubled son in The Skin of our Teeth. So Haj, too, is a part of the Guthrie’s DNA.