As we close out the year, Lavender looks back at a longtime friend who we lost in late October. Since Lavender began in 1995, John Townsend was our go-to source for all things arts and theater, providing countless previews, reviews, and in-depth analyses on local and touring arts productions that passed through the Twin Cities over the last 25 years.

Losing John was a major loss for not only Lavender, but for the Twin Cities arts and GLBT communities as well. To celebrate his unwavering commitment to writing for the arts and his brilliance as both a scribe and as a human being, we present to you a handful of his reviews and features written for Lavender over the years. This is only a mere fraction of the staggering volume of pieces John has written for us, and we will miss his dedication and friendship greatly.

Every time I come into contact with the plays of Samuel Beckett, I feel compelled to immerse myself in the essays of Ayn Rand as a form of detoxification. Beckett’s mid-century nihilism—the understandable reaction to the horrendous toll of fascism and totalitarianism which that more naïve era was unable to integrate into consciousness—became the prototype for many writers and artists of the beatnik and hippie generation. His declaration of war on narrative structure, religion, and romanticism actually betrays a strident, albeit cleverly veiled, sympathy with Marxism, which has been unearthed astutely and emphasized by director Bain Boehlke at the Jungle Theater in the current production of Beckett’s Waiting for Godot.

Our own era of increasing class division and excessive homelessness, which Republicanism craftily has overseen, seems to inform Boehlke’s take on this absurdist classic, known for its clownish hobo motifs. Fortunately for the audience, Boehlke cannot seem to shirk his intrinsically romantic sense of life, as he stresses with visceral cruelty Godot’s major subplot of the authoritarian land baron, Pozzo (Allen Hamilton), and his masochistic slave, Lucky (Charles Schuminski). These two marvelous actors have created an overwhelmingly intense depiction of dominance and submission reminiscent of existentialist/romantic Jean Genet’s The Maids. Godot plays almost larger than life, as opposed an empty and meaningless cosmos.

Kevin Kling and Michael Sommers portray the comic duo, Vladimir and Estragon, with delightful inventiveness. These two actors almost make you forget how tedious so much of Beckett’s dialogue is.

Fable has it that Waiting for Godot is an exceedingly random and shapeless play, but I’m afraid Boehlke punctures that little bubble of conventional wisdom. As usual, he has tapped into an emotional artery lesser directors never even would suspect exists, which spirits forth striking stage pictorials. Moreover, by sensitizing us to the savage ramifications of Beckett’s godless universe, Boehlke paradoxically reconstructs a spiritual reflection of Waiting for Godot that elicits compassion, if not empathy, from the audience for the character’s suffering. Through Boehlke’s lens, this play is not random, but a reasonably delineated dramatic essay on the stagnation and dissipation of the human spirit. From his vantage point at century’s end, Boehlke sees to it that nihilism duly is annihilated. 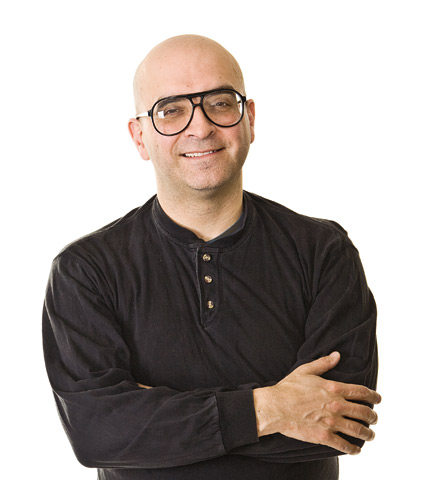 If you’ve ever watched autumn leaves get swept up into little whirlwind spirals, then you’re apt to recognize the visual and emotional spirals sweeping through Arthur Miller’s towering 1998 drama, Mr. Peters’ Connections, now at the Guthrie Lab, beautifully directed by James Houghton—although its inherent torment is more akin to winter.

The play is set in a cafeteria in the fifth dimension with what looks like leaves for a floor rather than linoleum or carpet. An elderly intellectual, Harry Peters, exquisitely understated by William Biff McGuire, mediates on people he has cared about and/or loved—romantically and otherwise—and laments the deterioration of modern to postmodern culture. He asks, “Where has all the sweetness gone?” and concludes despairingly that “humiliation is the key.”

A former lover, Cathy-May (Kaili Vernoff), wears a dog collar symbolic of her subjugation to a violent husband, Larry (Dominic Fumusa). Adele, a homeless African-American woman poignantly rendered by Isabell Monk, represents not so much the economics as the broken hearts and dreams of a vulgar age.

Houghton borrows from impressionistic painting. His superb actors twirl in gusts of agonizing miscommunications, only to be systematically redispersed into the infinite. Harry yearns for closure with each character, but, regrettably, they are now only phantoms.

Mr. Peters’ Connections’s dream-like atmosphere, splendidly enhanced by Christine Jones’s set, recalls Miller’s 1964 confessional masterpiece, After the Fall. Mr. Peters’ Connections, however, transcends the personal without ever losing intimacy. It becomes an elegy for the 20th century, but without the politics one would suspect of a playwright who many is synonymous with left-wing activism. What emerges is something universal and sublime, possibly even monumental, beyond classification or partisanship. And to have penned such a poetic vision of such astonishing grace and anguish at age 82 is a staggering triumph of the human spirit.

Talk about a production that recreates an era and style! Reeling at Children’s Theatre Company qualifies big-time.

Playwright Barry Kornhauser’s genius lies not in his dialogue—hardly any to be had, save for captions occasionally flashed high above the action. Rather, he tells a simple love story by emulating madcap images, stock figures, and formulaic plot lines spun from the silent movies of nearly a century ago.

While playing a street cleaner, Little Fellow encounters Big Man, which refers not only to actor Zach Curtis’s linebacker build, but also to socioeconomic arrogance.

Better yet, the frippery never lets up. Beth Gilleland delights as Diva, a matinee idol desperately full of herself. Rebecca Lord charms as Beloved, the ingenue.

Curators David DeBlieck, Dennis Yelkin, and Gerry Girouard will have you chewing on these questions when you see Que(e)ries, an evening of dance steered by out gay artists reflecting their life observations at Patrick’s Cabaret. DeBlieck shares, “When I started studying Dance History, I was immediately drawn to steamy photos of young, hunky Ted Shawn, often dancing with no shirt and surrounded by a gaggle of other glistening young bucks. My gaydar went wild! More complicated images of Kazuo Ohno doing butoh in female drag opened my mind to larger issues of gender performance and embodiment.”

DeBlieck’s historical view will play out in 15 Poses which uses photos of the iconic ballet dancer, Nijinsky, with musical selections by Claude Debussy, Karl Zero, and Jimmy Somerville, who was synonymous with the ’80s gay club scene.

Yelkin draws from his own personal connection with gay history. He became aware of his sexuality in the late ’50s and says, “As a young boy, it made me afraid and guarded of who I was. Living near San Francisco I would read newspaper stories about the tenderloin area and gay prostitution arrests. Negative as these stories were, it let me know that there were others like me. Then Stonewall happened.”

In the tradition of the Patrick’s venue, Yelkin will celebrate the male body electric. He curates a nude photo session on stage between photographer Robert Guttke and straight performer Jerome Bowden. Bowden grew up with a gay brother, Nic. He recalls that “a poor use of the word ‘gay’ was being thrown around in like third grade. My mom and my brother pretty much put an end to that right away.”

Yelkin joins Girouard in a duet that, Girouard relates, “was created as a Memorial Dance for Joan Calof, a great supporter of GLBTQ people and Patrick’s Cabaret. It plays with the overlapping need for touch, in desire, grief and intimacy and to just have two people of the same gender just dance together.”

One of Minnesota’s great veteran dancers is part of Que(e)ries. Jim Lieberthal says that “being invited into this particular assembly of artists has created a zone for me to do a piece which is not usually a part of my focus. The idea of loving and referring back to that love as a focus in what I feel is a specifically gay resonance. It is part and parcel of what I will present this time around. I feel that my being out opens up shutters and allows a sensitivity to see what might be possible, along with an impetuous impertinence to actually ‘go there.’ That is an inheritance of my out-ness for which I am very grateful.”

An Exquisite Sense and Sensibility at the Guthrie
Guthrie Theatre, Minneapolis
Originally published online on Oct. 21, 2016

No one ever wrote about the delicate relations between men and women and the intersection of economic realities like Jane Austen. Kate Hamill’s superb stage adaptation of her first and hugely popular novel, Sense and Sensibility, distills the true essence of one of the greatest of novelist’s core concerns. The two unmarried Dashwood sisters lose the bulk of their inheritance and are thrust into a meager lifestyle. This means they are ineligible to marry in the eyes of various men of means. Austen examines how they strive to maintain their dignity as they grapple with this prejudice.

At the Guthrie, Alejandra Escalante plays sister Marianne, who personifies “Sense.” This means she lets her passions be known and her unfiltered thoughts pour out. It also points at times to her lack of reflection necessary for weighing out complex practical and emotional problems. That said, sense is a vital quality at some points.

Jolly Abraham as sister, Elinor, personifies “Sensibility.” She treads more carefully in how she navigates the class change she has been thrown into and she looks more closely and wisely at the character of the men who enter the sisters’ lives. Though this may ward off embarrassment, it doesn’t necessarily ensure happiness. Both actresses embody the Austen aesthetic and contrast to pure perfection.

The entire ensemble is exquisite in their representations of gender codes and privilege gradations. Sarah Rasmussen has directed Sense and Sensibility with whimsical imagination and an utterly channeled sense of the Austen spirit. Junghyun Georgia Lee’s minimal set design and Moria Sine Clinton’s costumes capture the era splendidly.

If you’re looking for a pop musical that reels in the laughs with lots of snappy tunes, then catch Jefferson Township Sparkling Junior Talent Pageant on Park Square’s Andy Boss stage. When Frannie Foster Wallace returns to her greater Minnesota township after several disappointing years as a city-dweller, she remains disappointed that those who stayed in Jefferson have not advanced toward self-actualization. In fact, a few of them seem to have gone backwards. To make matters worse, her peer group is caught in a kind of time warp dating back to when a talent pageant ended in tragic absurdity decades before.

Choreographer Antonia Perez, music director Brian Pekol and fellow musicians Kyle Baker and Elise Santa have paced Keith Hovis’s charming musical with zestfully energetic power. A dynamic Kelly Houlehan as Frannie and a warm-hearted Zach Garcia as the honorable Travis, the boy her heart throbbed for in high school, are touching as they feel out just how to relate to one another so many years later. Ryan London Levin and Leslie Vincent are absolutely uproarious as the slacker and the narcissist who have each turned self-centeredness into a lifestyle. Laura Leffler, known for her striking directorial work in heavy ancient tragedy, reveals she also has a wonderful flair for the madcap!