John Fugelsang: Our Favorite ‘Fag-Stag’ Talks About His New Comedy Show and Recent Strides in Gay and Lesbian Rights 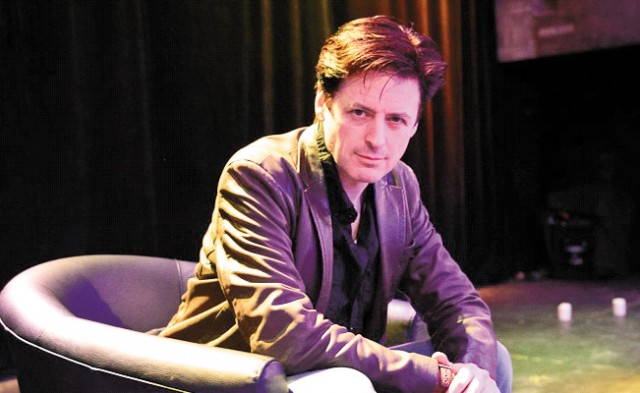 John Fugelsang is surely one of the most passionate and eloquent straight allies of GLBT Americans. He is also one of the most intelligent and funny comedians around. Whether he’s co-hosting on Stephanie Miller’s radio show or hosting the Va Va Voom Awards for Visual AIDS, a noted group that supports artists with HIV and the legacy of HIV art, he fractures with a vengeance the stereotypes about straight guys being insensitive to queer issues.

Though Fugelsang has lately been best known for his dynamic comic turns in the national tour of The Sexy Liberal Show, for which Lavender Spotlight named him Best Solo Performer From Out of Town 2011, he has actually developed a more ambitious solo show, Guilt: A Love Story directed by Tony-nominee, Pam MacKinnon, which plays the Pantages on June 16.

Fugelsang, the son of an ex-nun and an ex-Franciscan monk, draws from his own personal history to expound on religious intolerance and the absurdities of right wing politics. But he’s not merely a stand up comic. His performances have a physical and vocal power that spellbinds, so it’s no surprise Guilt: A Love Story was nominated by the Drama League for Best Off-Broadway solo show.

JT: You won me over the first time I heard you call yourself a ‘fag-stag’ on Stephanie Miller’s radio show. How did you come up with that?

JF: Faghag – when I was a kid, that was what they called a woman who hung out with gay men and I’m a straight guy who hangs out with gay men. I lived in Greenwich Village. I grew up in regional theater.  When I was 13, I realized I was a homophobic bigot and that half the men I knew and loved were gay. And that I was just conforming and that I really hadn’t thought about things. So my heart was opened at a very early age. Like, I said, I lived in Greenwich Village; my best friends were gay. I’d hang out at gay bars – that’s where all the cool women are.

The LGBT culture is such a part of my life. I got to live in Greenwich Village at the dawn of ACT-UP (AIDS Coalition to Unleash Power) and the AIDS resistance movement. I moved there in the late ’80s when I was 16 years old, so I got to witness the birth of ACT-UP and that whole generation. I had a lot of friends with HIV who died and some who lived, and my best friend from childhood was a hemophiliac who contracted HIV. He was a homophobe, and he died. For me, in a way, it affected me. When the President made his announcement about marriage equality, a lot of progressives want to pooh pooh it and say “Welcome to the  party now. Where were you a few years ago?” But I understand the compromises he has to make for political reasons. But I felt there’s never been any minority group in history that has made as much progress in as short a time as LGBT Americans. Throughout all of human civilization, we’ve never seen a minority group go from underground and being rather despised and trivialized, (in a) marginalized status to a place of social prominence and acceptance. And really it’s because of the plague. AIDS is what caused the LGBT community to mobilize and get their shit together, to not wait to ask for rights to be given, but to take them. I think there’s a direct correlation between the AIDS plague and Barack Obama’s announcement because, were it not for that horrible, horrible disease, we would not have seen all the beautiful advances we’ve seen over the past few years. And it makes me proud to be an American and proud to be a human.

JT: We should count our blessings as we recall how far we’ve come in memory of those who have passed away.

JF: A lot of young guys don’t realize this. I know gay teens who don’t even like to use the word ‘gay’. They don’t want to have any kind of label. I respect that. Each generation has to carve out its own identity. I have to look for positives everywhere I can. We would never have seen gay and lesbian troops allowed to serve openly in the military. We would never have seen marriage equality legalized in so many states were it not for this disease.

JT: You have a rich sense of history that comes through your interviews obviously, and through your comedy. Not to mention your political and religious insights. Tell me about Guilt: A Love Story.

It also begins with the story of my parents’ love story. How they once swore never to love and then broke their vows and how neurotic it can make you to be the child of parents who once promised God you’d never exist. I use (all this) as a springboard for a lot of funny stories and a lot of funny history of how religion got to be as crazy as it is. The whole show is about breaking vows and the growth that can come from that.