The 2015–16 season was a great year for U.S. Figure Skating, culminating in a solo U.S. woman standing on the podium at Worlds for the first time in over a decade. But fans missed one competitor taking a break from the ice.

Jeremy Abbott took the last season off from competition and, although he has been making the rounds across the country with shows like Stars on Ice, he’s missed competing. “It was hard to watch from the sidelines,” he says. “I just wanted to be in the mix! That said, I’ve gotten to perform and work with people on various projects that I never dreamed I would get to. I really have loved everything that came my way this year.”

Training for shows compared to competition has been a big adjustment for Abbott, who was used to having his entire day planned out to the minute while competing. “I know what I’m eating and when I’m training — even time to watch television is scheduled,” he says. “Training for shows, it doesn’t matter what time I skate as long as I get it done. I have to maintain a baseline level of fitness because I can be called to perform at anytime, but I’m certainly not in Olympic shape. It’s been a big adjustment from having crazy strict structure to picking up and leaving at the drop of a hat!”

The four-time U.S. national champion will be stopping in St. Paul with Stars on Ice May 1, and after taking the season off from competition, he says recent interactions with fans have been interesting. “I’ve had so many tell me how much they miss seeing me skate,” he laughs. “But the reality is that I skated and performed more this last year than I ever have! Most of my work is in Asia though, and anything in the U.S. isn’t televised anymore. I’d love to bring professional skating back to the forefront!”

Abbott’s passion to see figure skating grow and thrive is evident: in past years he created a fund with the Aspen Skating Club to support competitive local male figure skaters and participated in An Evening on Ice, which benefitted financially challenged skaters.

“It’s a unique sport that is extremely athletic but also an art form,” he shares. “You don’t see that anywhere else. This sport truly has given me a life I didn’t dream I could live. So, for me, helping other skaters and their families is the least I can do to give back. I’ve been able to get involved in many charities and fund raising events through skating. Everything from raising funds for skaters, to children’s literacy, to cancer benefits; I do stuff with World AIDS day, to my own Parkinson’s fundraising show. It’s truly a privilege to be able to use my talents and my passion for something that has a legitimate impact on other people’s lives.” 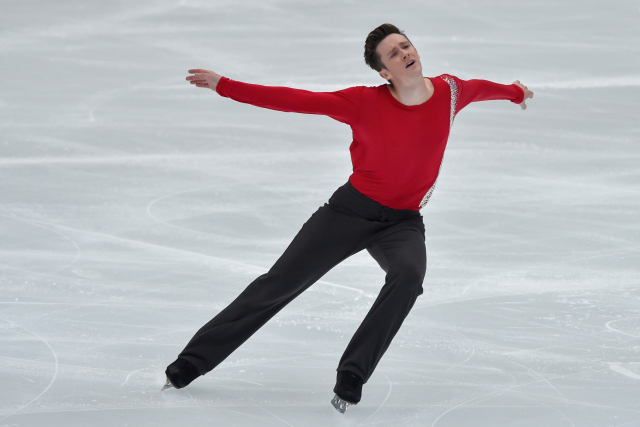 Taking time off from competition has allowed Abbott time to raise funds and awareness, but also to choreograph for other skaters. Abbott is the man behind the short programs for Ashley Cain and Shotaro Omori, as well as Alissa Czisny’s exhibition piece to Sia’s “Elastic Heart.” Doing choreography for others is something he’s really enjoyed this past year. “I have found it has helped a lot with my own skating,” he says. “Explaining things to various skaters in different ways has made me look at my own skating differently. I’ll be working with someone and explain something then have this ‘aha’ moment. Something clicks in my brain for things that I was struggling with myself.”

But with all of the fun and new experiences he’s had during his year of not competing, he has always said that he isn’t retiring from competition, even going as far as to say he would love to compete at another Olympics. “It’s never been my best competition, but it is absolutely my favorite,” he admits. “I don’t know that I will return for the 2017 season, but I’ve been pushing myself on the ice, keeping up my fitness, as well as improving my skills. I truly feel I’ve improved in this last year and I am definitely keeping a return to competition in the back on my head.”

With statements like that, there’s always a chance that he will return to competitive ice, especially after the great show U.S. skaters put on at the World Championships in March, which Abbott credits to the audience.

“The audience at the World Championships in Boston was everything!” he gushes. “Seeing how many people were in the arena, and the sheer noise made me so upset that I wasn’t on that ice! That’s the type of audience I dream of. When we are on the ice we give every ounce of energy we have, so when an audience gives that energy back in such a way it elevates the skater, the performance, and the competition (or show). I truly believe that’s why we saw so many unbelievable skates that week.”

He continues, with a wink, “So when you all come to Stars On Ice make sure you are LOUD! It will make it a better experience for you as audience members!”

With Stars on Ice only days away, Abbott assures fans that there is truly something for everyone. Being that it’s the 30th anniversary of Stars on Ice, the skaters are bringing everything to the table, paying homage to the past as well as bringing in new elements to keep it fresh and exciting.

“I think in the past the drama and story lines took over the image of figure skating more than the actual competition itself,” Abbott says. “In recent years there’s definitely been an upswing in viewership and what the athletes are doing is getting crazier and even more impressive. I think people who watch figure skating live truly understand the power and athleticism. Television is amazing, but it doesn’t quite do it justice, so I highly recommend coming to shows like Stars on Ice. You get the glitz, the glamour, and the drama, but you also get to witness the true power, speed, and athleticism that we bring to the ice! This show and this cast especially have done a mind-blowing job this year.”