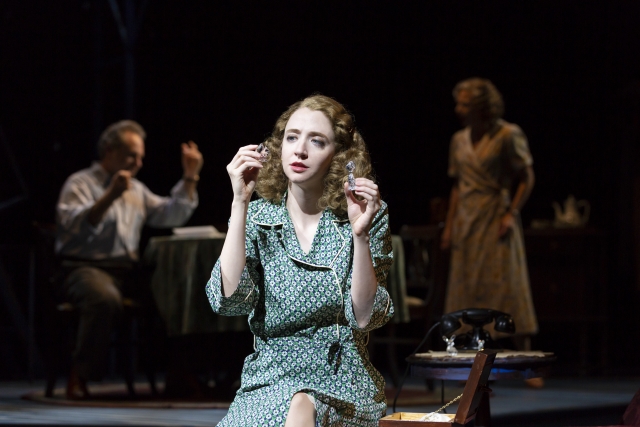 Jennifer Van Dyck sails in a stirring performance in the major role of Amanda Wingfield in the Guthrie Theater revival of The Glass Menagerie. She masters the distinct lyricism of playwright Tennessee Williams’ gorgeously poetic sense of language while simultaneously finding a grit and bitterness that suits the role. It’s a less naive take on Amanda than how the part is generally played, but it works and is in keeping with the playwright’s conception of the part, which is based his mother, Edwina.

When Van Dyck burrows into the sections where Amanda’s wit’s end attitude convulses over her adult son, Tom (a crusty Remy Auberjonois), staying out late till the wee hours, it pierces the atmosphere. The Tom character actually represents Williams himself. At one point a nuanced Van Dyck seems to intuit her son’s possible gayness. A superb moment I don’t recall ever having seen any other actress discover in the many times I’ve seen this landmark 1944 play by the man often considered the greatest gay playwright in human history—and that’s counting the ancient Golden Age Greeks!
Again, Van Dyck’s Amanda seems less naive than the role is so often rendered, which makes sense because the woman has had to struggle with being a single mother constantly struggling with poverty since the the roaring ’20s into the 1930s Great Depression of the play’s setting. Her fairy tale illusions about men and chivalry have shattered, yet she still clings bravely to shreds of optimism. Amanda also has a visceral and loving fear of what will happen to her daughter. Yes, Amanda’s anxiety is toxic, but her love for her children is profound. The actress conveys this movingly.
The interaction between Tom’s disabled sister and his work mate, Jim, is beautifully played between an endearing Carey Cox as chronically withdrawn Laura and Grayson DeJesus as Jim O’Connor, an extrovert whose ambition and faith in the American Dream seem boundless. The charismatic DeJesus reveals how the proverbial power of positive thinking can be a tool of unwitting cruelty. Cox’s response to that is wrenching. Their big scene together is breathtaking.
Auberjonois is a wonderful actor but he’s very alpha, if not studly, in a heterosexual sense—not how one thinks of Tom—and there seems to be little age difference between him and Van Dyck. He also seems old enough to play Cox and DeJesus’s father. Tom is a tricky role because he narrates from a distant point in time, but I’m afraid director Joseph Haj has calculated that point as too distant.
Nonetheless, the appealing Auberjonois certainly understands Tom’s yearning for adventure and his frustration with floundering in dreary St. Louis with his suffocating familial duty. (Auberjonois would actually be extremely well cast in the protagonist role of Reverend Shannon in a later Williams masterpiece, The Night of the Iguana or as the cynical Gutman in, as nicknamed by Gore Vidal, The Glorious Bird’s most experimental work, Camino Real.)
Haj’s overall direction of the classic is lucid, sensitive, and respectful. Raquel Barreto’s costumes aptly reflect its 1930s setting with a charming touch of the Old South in one of Amanda’s outfits. Mikiko Suzuki MacAdams’s set design is exquisitely minimal and lit to lovely warm effect by Christopher Akerlind. Jack Herrick’s music and Darron L. West’s sound design enhance the play’s poetic spirit nicely.
The Glass Menagerie
Through Oct. 27
Guthrie Theater, 818 S. 2nd St., Minneapolis
(612) 377-2224
www.guthrietheater.org