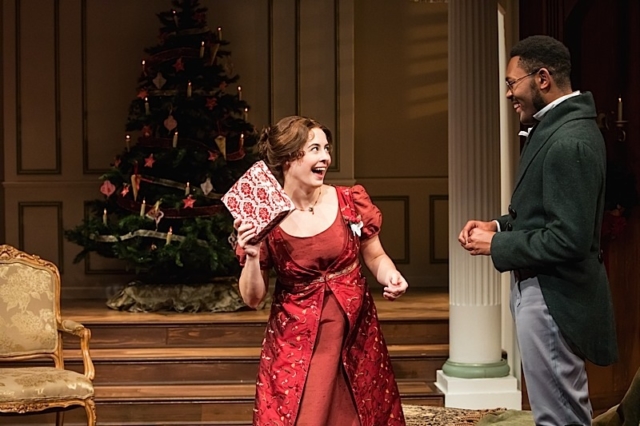 Jane Austen’s savvy, warm, and witty Pride and Prejudice is one of the major novels of the 19th century. It has been adapted into popular screen and stage versions so often and for so long that its characters are familiar to millions. Moreover, Austen’s comedy of manners signature fiction has spurred many writers to spin off her style and astute observances of the struggle for civility and requited love between men and women.

Playwrights Lauren Gunderson and Margot Melcon are remarkably astute themselves in their stage sequel to the novel. Miss Bennet: Christmas at Pemberley, now on stage at the Jungle, captures the dilemma of young women of early 19th century England’s middle class navigating the quest to find a suitable gentleman to marry. Reputation, strict protocols, and income on both sides were central components in forming a socially acceptable bond.

Pemberley’s stage protagonist is Mary, the piano playing bookworm sister of the novel’s protagonist, Elizabeth Bennet. Christan Bardin’s title role portrayal splendidly embodies a young woman’s inner conflict. Mary’s persistently conservative and erudite persona has actually been engrained, but passions surface as she gets in touch with her deepest desires. Bardin is matched to ideal effect with a sweetly vulnerable JuCoby Johnson, as wealthy Arthur, a sensitive gentleman under the misapprehension that social codes would have him marry another woman. The pair creates a sparkling stage chemistry. 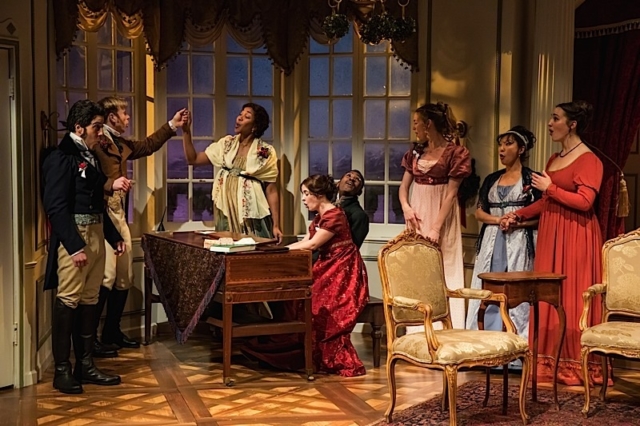 Director Christina Baldwin’s cast exquisitely handles the Austenesque language and values the playwrights have impressively mastered. Adia Morris is simply superb as Jane Bingley. One could argue, however, that some of the women characters have a contemporary edge, especially the sister Lydia. She is run by amorous personality undercurrents and actress Kelsey Didion plays that vibrantly. And to be clear, that is how it is written.

There is, however, a puzzling element in Baldwin’s staging. Though the characters are written within an age range from young adult to middle age, she has actors who clearly appear to be early to mid-30s, playing much older roles. A strange casting approach for a professional theater in one of the most theatrical cities in North America. Nonetheless, the entire multicultural cast captures the period and style delightfully.