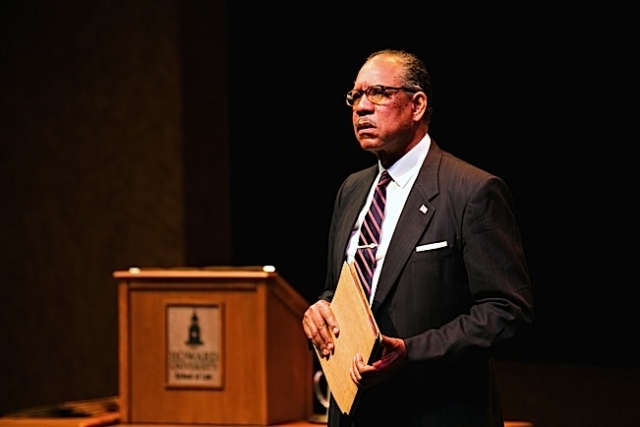 Poto by Lauren B. Photography.

Thurgood Marshall (1908-1993) looms as the first African-American Supreme Court Justice. James Craven gives a penetrating solo performance at Illusion Theater in Thurgood, in which a retired Marshall reflects on the times of his life and the lens through which he sees the world. We learn of a boy seeing black prisoners taken into custody by bigoted Baltimore policeman and as an adult, almost getting lynched on a trip to the south because being a black lawyer was amazingly threatening to white folks there.

George Stevens, Jr.’s script is densely informative and its dramatic aspects are understated. Craven’s low-key earthy delivery moves what could have been an overly talky play into the realm of superb characterization. Marshall was no cookie cutter activist. He disagreed with Martin Luther King on how to go about struggling for civil rights. He saw the legal system as the way, and not civil disobedience. Though he had great respect for King.

The play also recounts Marshall’s disdain for guns, his implacable feelings against the death penalty, and his forceful defense of privacy rights in the face of puritanical types who crusaded against “obscenity”. Watching this absorbing performance made me realize that Marshall is someone most of us need to know more about. He is a pivotal figure in American history. Directed by Michael Robins.