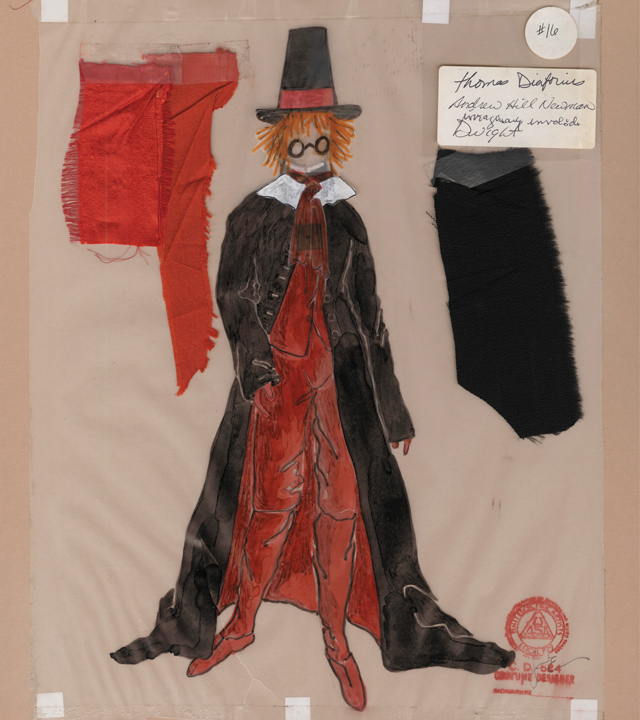 In Twin Cities theater history, Jack Edwards could be called the “Dean of Costume Design” and a major figure in American regional theater history. Before he began his 18 year tenure as the Guthrie Theater’s Costume Director (1971-1989), he worked as the right hand man alongside some of New York’s significant 1960s costume designers and earned praise for his own design for What Did We Do Wrong? at the Helen Hayes Theater (1967). In the ’60s Edwards also worked on such New York productions as To Clothe the Naked, Tony-winner Applause with Lauren Bacall, and the national tour of the iconic, lesbian-themed “he Killing of Sister George. Edwards was also closely associated with such fashion luminaries as William J. Cunningham and Ray Diffen.

After leaving the Guthrie in 1989, Edwards began 12 years as costume designer for the 8th Floor Christmas Fantasy Lands. For this he is probably as beloved as he was for his years of gorgeous Guthrie designs. One often hears how the 8th Floor shows are no longer the beguiling things they were back when Edwards created them.

In 1990 Edwards designed the Pre-Game Super Bowl Show with Jack Barkla for musician Dan Witkowski, and in 1993, costumes for Prince’s Ulysses tour. Not to mention designs for the Holidazzle Parade, Ordway, Children’s Theatre, and Minnesota Dance Theatre.

His work can now be observed and celebrated in Character in Costume: A Jack Edwards Retrospective at St. Paul’s U of M campus at the Goldstein Museum of Design. I spoke with the costume legend at his lovely home in St. Paul recently. 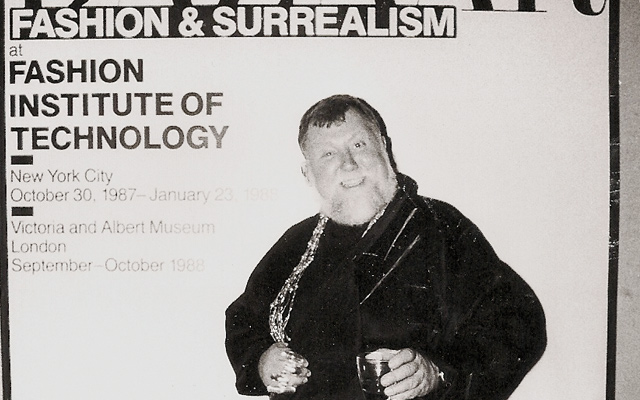 JT: You are admired for a number of reasons, but in the GLBT community I see two primary reasons for that: One, your decade on Broadway and at the Guthrie in its formative years and beyond, and two, you have been out as a gay man since well before Stonewall.

JE: I used to collect boyfriends around the world. I never did very well in America, but God, put me in another country and I was, well, anyway…

JT: Can you share an early memory of what it was like to be gay? The difference between then and now?

JE: Night and day. Nobody even mentioned it. And there were certain people who didn’t think it existed. In second grade all the boys were playing ‘pinch the peter’. The boys were all kept after school except for me and Charles, a beautiful Botticelli boy. We didn’t play the game at all. On the way home I felt very guilty because I knew they were just playing and I knew I wanted to pinch the peter.

JT: I wonder what Genet would have thought of that! One of your earliest costume assistant jobs was the American premiere of a play by perhaps the 20th century’s most controversial openly gay playwright, Jean Genet. The Blacks in 1961. A huge hit (with Cicely Tyson, Maya Angelou, Charles Gordone, Louis Gossett, Jr., James Earl Jones, and Roscoe Lee Brown).

JE: It was one of the Off-Broadway shows with no money. We had a little room above the theater that we made clothes in. Each of us (costume assistants) had only one dress. Pat Zipprodt was a brilliant designer. She was so brainy that she had two Phi Beta Kappa keys that she wore as earrings. She was very serious and very intellectual and just wonderful. When she did 1776—

JT: The one that beat out Hair for the Best Musical Tony?

JE: Hair blew the hell out of  Broadway theater but it didn’t replace it. It was an individual, which is fine. And of the day. It was wonderful. And strangely, I knew Gerome Ragni (Hair’s co-creator), because he was one of the spear carriers in Richard Burton’s Hamlet. 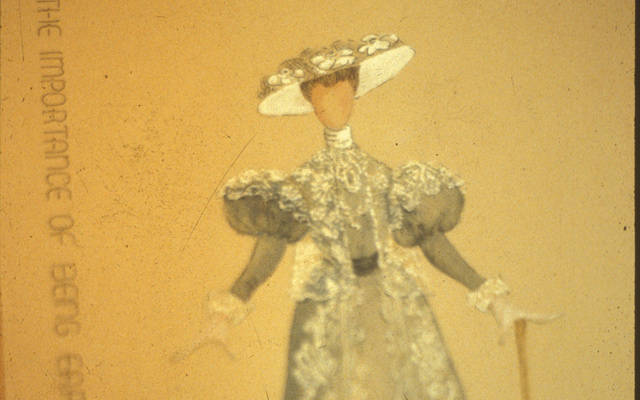 JT: In which you were-

JE: Assistant designer to Jane Greenwood. The producer said they’re going to be in rehearsal so they don’t need costumes designed. The concept of the production was that it was set in a rehearsal. So I said, so why don’t you try asking everybody to wear what they would wear to a rehearsal and let them make their own choice? Well, Richard, of course, was all in black. Gerome Ragni came in a red ski sweater and white jeans. Well now, who did you watch? And he (the producer) decided well, maybe we did need a costume designer. So Jane and I, actually did with our own hands the players’ costumes, up in Toronto.

JT: That’s the player King and Queen in Hamlet’s play within a play.

JE: Yes. And I was only supposed to stay through Toronto. Then when he said “I would like you to stay on through the Broadway run.”, it killed me because I had already committed myself to the Santa Fe Opera.

JT: You came to Minneapolis in 1971 when Michael Langham had taken the reins as the Guthrie’s Artistic Director and was still shaping the theater’s identity in the way Sir Tyrone Guthrie had envisioned.

JE: I came to Minneapolis with what I called my survival kit. I had a hand made quilt. I had silver candlesticks and my flatware and a couple of pillows. That made my life. I moved into the Oak Grove and designed A Touch of the Poet; not much scope but it put my foot in the door. And that was it for me. And at the end of the season I went back to New York.

Then I was at Joe Allen’s (Restaurant) one night and Len Cariou was there and said, you know, it’s really a shame you won’t go back to Minneapolis. I said I never said I wouldn’t go back. I said I wouldn’t go back under the situation the way it is. Everybody gets $60 a week and they work every waking hour. I said the theater is parasitic. It takes advantage of the people who make it possible for it to exist. And I refuse to be part of that! So I told them I wouldn’t come back till they paid the (costume) workroom an hourly wage. They said, oh well, we can’t afford it. I said yes you can. Take the same amount of money that you do now and break it up by hours and then pay them accordingly and then when they’re through with those hours, they go home. Oh well, we’ll never get the work done. I said, well in that case, you don’t deserve to have it done. I hate people who take advantage of artists! I just hate it! So they finally agreed and they came back. I wasn’t making a great deal of money but I was making that amount every week, so it meant I could plan. 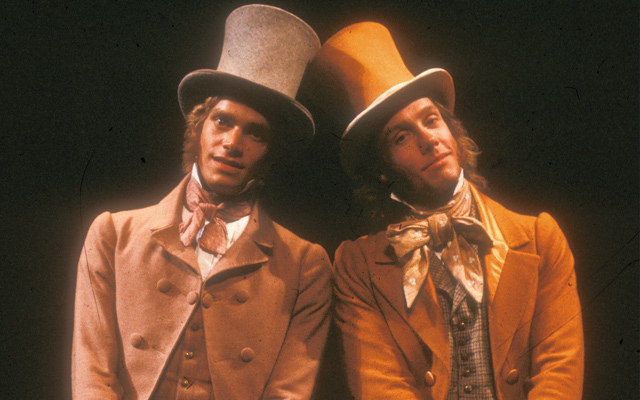 JT: You’ve mentioned the struggles of dancers you saw in your New York years.

JE: Out of the 10 years that I worked on Broadway, there were only two dancers who appeared in two shows. All of the others were always new and they were all wonderful. Think of the glut of so many dancers. It was awful to live in New York. You had to have seven room mates.

JT: Tell me about some of your designs after you did return to the Guthrie.

JE: With Rhinoceros (1986-87 season) I felt my color palette was very delicate and it was surprising because people came up to me and said how much they liked the color palette. I never even thought they’d see it!  But you do your work for yourself and for those few people who do understand. In Pantagleize (1977-78 season) -I won’t be able to remember them all now- but I used a lot of second and third rung painters as my background in my research. A woman came up to me after the opening night and she said, other than Anzor -and she started rattling off five of them- were all the ones that I used! She asked did you use anything else? I was speechless! I thought, but I’m glad you came – would you come back every night?

JT: Don’t you think that even for the untutored eye, a good design is still going to register?

JT: You began your time as Costume Director in 1971 when Michael Langham, who is thought by many to have really shaped the Guthrie’s identity was very much in touch with Sir Tyrone Guthrie’s vision of what the theater could be. But then at the end of the ’70s, Langham left. Alvin Epstein came in for a few years as a kind of interim figure. Then in 1980 Liviu Ciulei took the Artistic Director reins. Unlike Guthrie and Langham, he and his Artistic Associate, Garland Wright, who would eventually succeed him, were concept-driven. Guthrie and Langham, were basically text-driven. 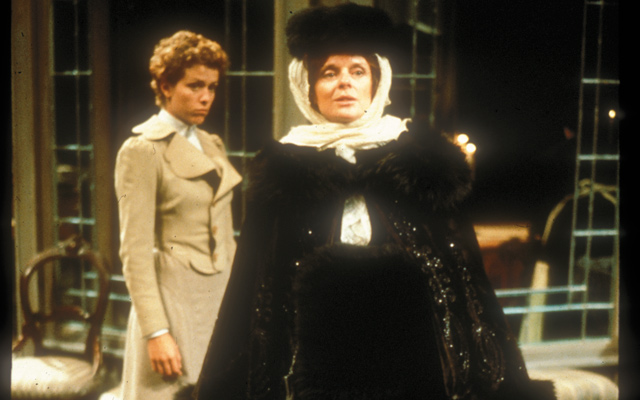 JE: When Liviu took over the theater he called me down for a meeting. I went in and he said, well Jack, I’ve seen a lot of things that you have designed but I don’t see a Jack Edwards stamp. And I said thank you. I knew that’s not what he meant. And he looked at me and I said, this is not about me. This is about the playwright and the play.