Explore the history and delights of Philadelphia, which boasts a vibrant GLBT community all its own.

I’ll admit that when I was a kid, any vacation that involved constant history lessons instead of constant theme park frolicking was no vacation for me. I was far more interested in beach days, rollercoasters, and pushing my folks to buy me frivolous crap from theme park gift shops than, you know, learning something. 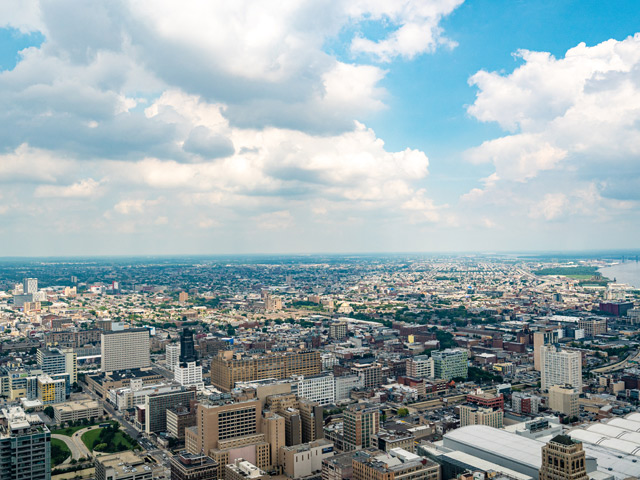 The City of Brotherly Love offers up no shortage of incredible sights.

Luckily, I grew up a tad since then, and as an adult, I make sure to indulge in some measure of historical sightseeing in my vacations. When my friend and I decided to take a trip to beautiful Philadelphia, PA, we knew we had our work cut out for us in terms of discovering archival wonders relating to both the city itself and our great country at large. 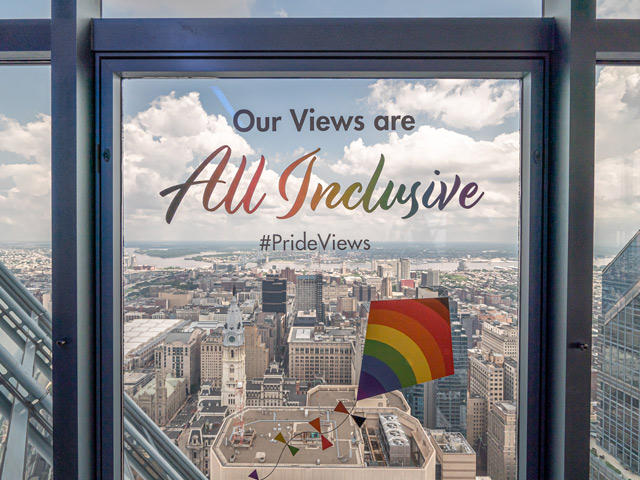 Let me tell you, we discovered them and then some: with Philly being the birthplace of America and all, we encountered a treasure trove of historical gems, but one thing that deserves notice is the fact that the City of Brotherly Love is host to a vibrant hotbed of GLBT culture and history.

“Philadelphia has a very rich, strong community and presence,” said Arturo Varela of Visit Philadelphia. “Our Gayborhood is [a] pretty central location, which is also an area not only of gay bars, but also just amazing restaurants and shops.” 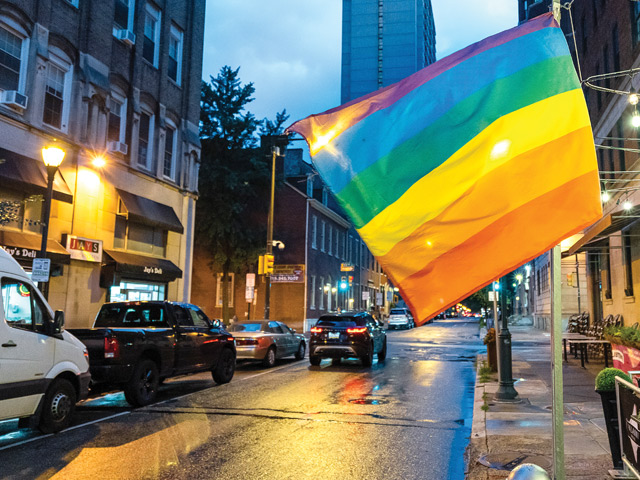 What is the Gayborhood, you ask? A Center City gay village located in the Washington Square West neighborhood, the Gayborhood is a hub of many GLBT-owned and GLBT-friendly businesses, bars and locals in downtown Philly, with street signs and crosswalks adorned with rainbow colors, inviting queer tourists to enjoy Philly’s rainbow nightlife in style.

“We have a really rich LGBTQ history,” said Varela. “I say one of the best examples of that history [were the] demonstrations for LGBTQ rights that took place every Fourth of July from 1965 to 1969 outside of Independence Hall. Those demonstrations are known collectively as the Annual Reminders. Walking around the city, you’ll see many historic markers everywhere, and you’ll see that many of them are marking an event that was significant to our community.” 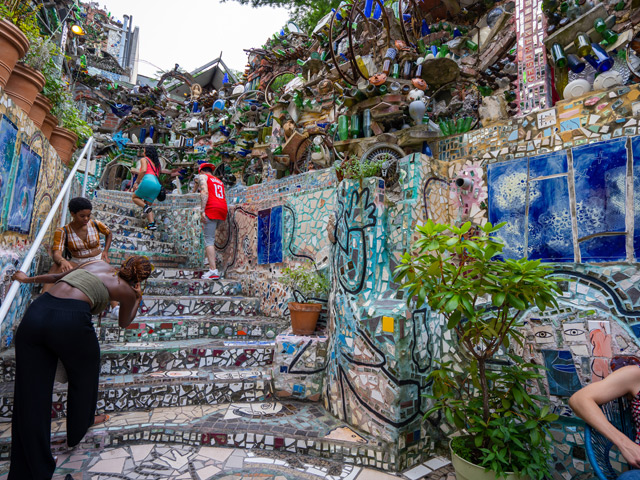 For the artistically inclined, consider a trip to Philadelphia’s Magic Gardens, a nonprofit mosaic wonderland.

There are plenty of bars and nightclubs for GLBT visitors to choose from, from Woody’s and U Bar to The Bike Stop and Voyeur. There’s also no shortage of parties to attend here.

“We have a really, really strong drag culture here in Philadelphia,” said Varela. “One [example] would be Bob and Barbara’s Lounge on South Street. Every Thursday, they have this amazing attraction,” which would be the longest-running drag show in Philly. 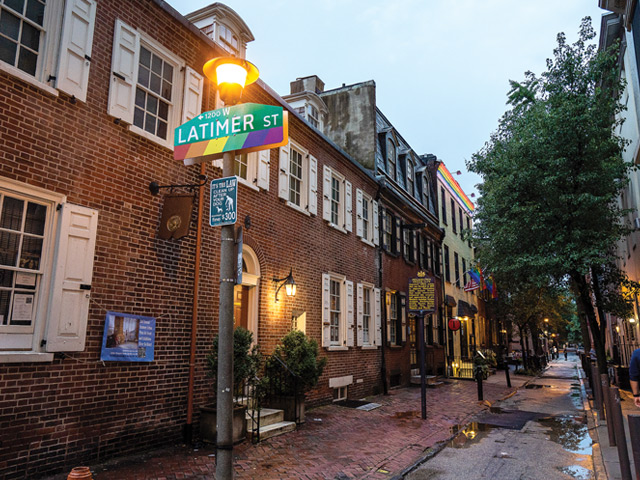 Expect a heapin’ helping of rainbows in Philly’s Gayborhood.

Of course, history is a natural resource for Philadelphia, and I’d be remiss to not mention must-see American history lessons courtesy of Independence Hall, the adoption place of the Declaration of Independence and the U.S. Constitution; the relatively new Museum of the American Revolution, a brilliantly comprehensive chronicle of American Patriots’ fight for liberty from the British; or my personal favorite, the National Constitution Center, an interactive museum that offers the best lesson in civics outside of an actual civics classroom.

Head to the west end of Benjamin Franklin Parkway to do your best boxing pose next to the iconic Rocky statue before running up the steps and exploring the visual wonders of the Philadelphia Museum of Art, home to hundreds of thousands of paintings, sculptures, and relics that would take weeks to fully take in and appreciate. Absorb the stunning Second Empire architecture of Philadelphia City Hall before heading up to the 57th floor of One Liberty Place to view the Athens of America in all its panoramic glory. 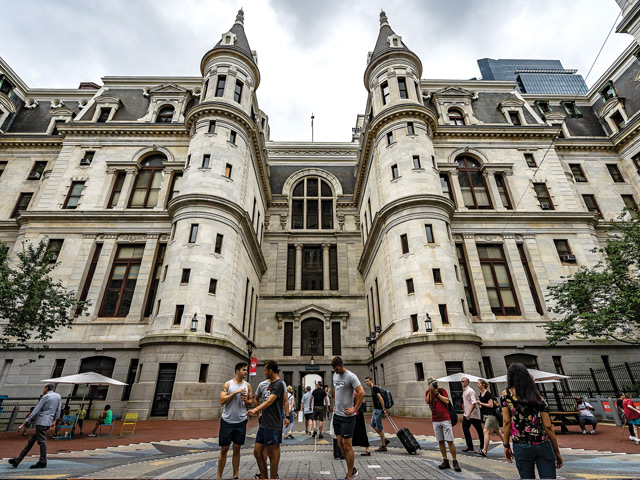 Philadelphia City Hall is a marvel of Second Empire-style architecture.

And lest we forget, there’s the food. OH, THE FOOD. The cuisine of Philadelphia is almost as legendary as the historical landmarks, and it’s a reputation well-deserved. You’ll have a LOT to choose from, whether it’s baked goods and meats from the Italian Market in South Philly to classy American fare at restaurants such as The Love and Mac’s Tavern. Then there’s the crown jewel of Philly food: the cheesesteak.

Opinions vary wildly, especially among Philly residents, but my friend and I decided to wade into the ultimate South Philly debate: who has the better cheesesteak—Pat’s, or Geno’s? After our careful and very scientific exploration of both restaurants’ steaks, we decided that Pat’s was the true King of South Philly when it comes to this meaty, cheesy work of culinary genius. That’s just us, though! When in Philly, take advantage of every cheesesteak opportunity you get! 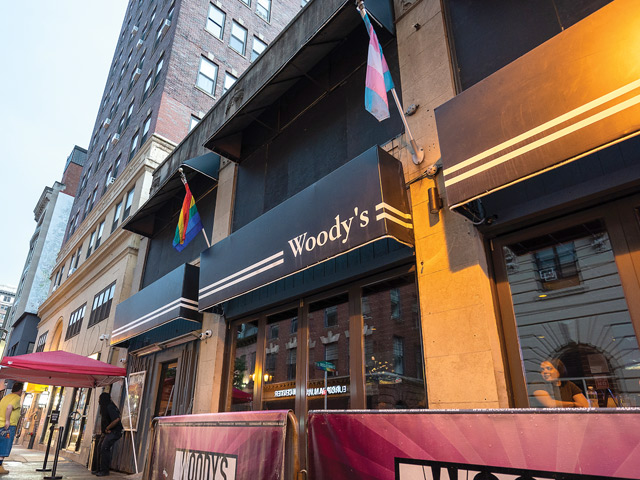 Philadelphia is home to a number of legendary GLBT bars and nightclubs, such as Woody’s.

While Philadelphia is a fine place to visit year-round, fall is an especially fine time to stop by, says Varela.

“One of my favorite months of the year in Philadelphia is September,” said Varela. “September is special because we have two really big festivals including the Fringe Festival. It has literally hundreds of shows, including shows organized by local organizations and artists. And then the other festival that takes place is the Opera Festival.”

Another major event occurring in Philly during the fall months is the annual OutFest, a GLBT Pride event associated with National Coming Out Day (NCOD) in mid-October. In fact, it’s the largest NCOD event in the world!

“It’s actually my favorite gay event of the year,” said Varela. “OutFest is this amazing celebration and block party that we have for National Coming Out Day in October. And it’s a really fun one. They have different stages with entertainment and drag shows, and they have DJs.”

OutFest will be taking place on Oct. 13 this year in the Gayborhood, with over 150 vendor booths, live music, activity zones, dance parties and more.

Simply put, whether you want to enjoy the amazing GLBT culture of Philadelphia or soak in all the American history you can muster, you’re guaranteed a trip you’ll never forget.

For more information on the City of Brotherly Love and the multitudinous joys to discover within, visit www.visitphilly.com.