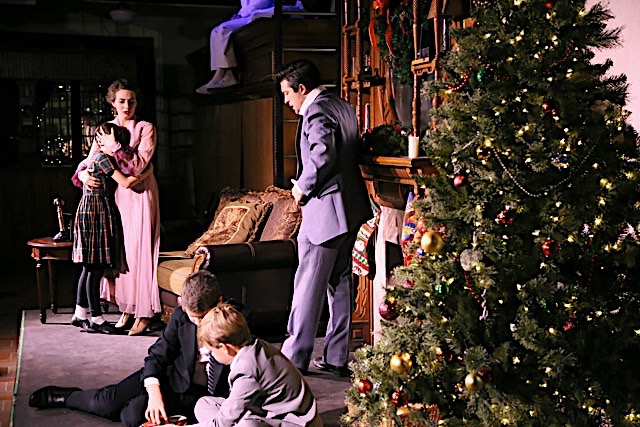 November marks the beginning of the holiday season (when, exactly, to begin playing Christmas carols is a matter of opinion). But for local theatre companies, like Stillwater’s Zephyr Theatre, November means preparing for the annual Christmas show, a stage adaptation of the classic film It’s a Wonderful Life. But unlike the 1946 film, Zephyr Theatre’s production promises a one-of-a-kind experience that only live performance can deliver.

The script, originally adapted as a live radio performace by Tony Palermo in 2005, tells the story of George Bailey, a down-on-his-luck businessman looking to escape town and his debts through suicide. A fledgling angel, Clarence (to be played by Patrick O’Brien, whom audience members may recognize as Mr. Dewey from Saved by the Bell) intervenes, instead showing George all the good he’s accomplished for his neighbors by staying in town.

Fans of other Christmas classics will recognize inspiration from Charles Dickens’ A Christmas Carol, but according to Executive Director Calyssa Hall, Zephyr Theatre is returning to this particular story at their audiences’ requests: “We get letters consistently [from past audience members] watching George’s cycle of depression . . . People that are in tears after the show, and they’ll write letters saying it was really impactful for their teenagers that are struggling with depression.” Much in the spirit of the show, it seems, audience members are bound to experience the lesson of the play, “‘Well what do you have?’ Instead of worrying about all of these things you dream your life [could be] and you’re not there . . . It’s a good time to remember it is a wonderful life.” Holiday seasons are often fraught with mental health issues, and the best stories–like this one–can help those of us who are struggling feel seen and supported.

Seeing how the show resonated with audience members in its original 2019 production, Zephyr, like many theatre companies around the world last holiday season, put in extra creative hours to bring It’s a Wonderful Life to fans in a unique at-home format. 2020 audiences received hand-assembled boxes full of 26 wrapped gifts and a recording of the show in radio format, complete with prompts from “the angel” to open gifts like candy canes, confetti snow, and a mix of bottled aromas at key moments in the story.

Attendees of the returning stage version will be treated to their own dynamic performance, moving between Zephyr’s two stages and bar throughout the show (all developed out of the historic Minnesota Zephyr Train Depot in which Zephyr Theatre resides). A difficult task for any theatre company operating with COVID guidelines, and Zephyr Theatre hopes that the carefully planned live shows will allow for some real, safe, and much-needed human connection.  Associate Artistic Director Randal Berger says that theatregoers should always expect a memorable night of theatre that’s as inventive as it is delightful: “The types of theatre we do and the way that we work with [our local audience] . . . Stillwater does have that kinda [feeling of] ‘Come up on the porch, let’s sit down and chat for a while and take you somewhere you might not have thought you were gonna go.’”

Tickets for the show, which runs from December 3rd through January 2nd, can be found at StillwaterZephyrTheatre.org. For fans of the movie Clue, grab your tickets now for the final weekend of the live adaptation, running through November 21st.