It Was A Very Full Life: Terry Kilburn II 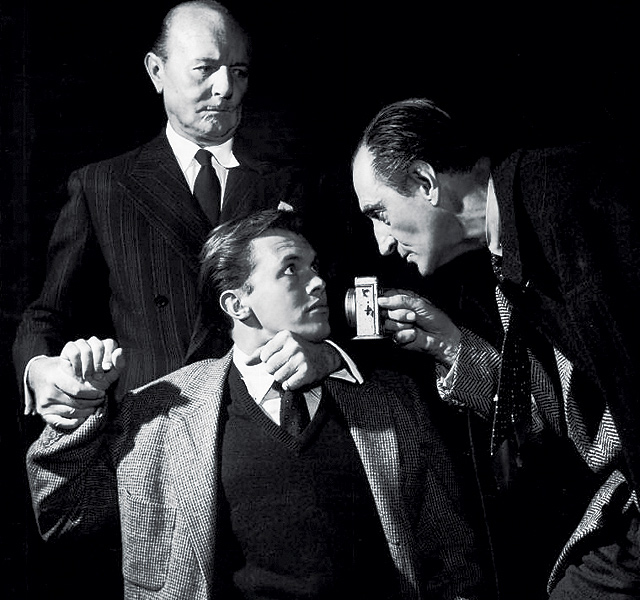 Upon arriving in Hollywood after filming Goodbye Mr. Chips, Kilburn, now twelve, found he had outgrown the roles he had expected to play. MGM did not renew his option and the Kilburn family had to reassess.

It was quite an adjustment and was difficult for my parents. My mother and father loved California–the United States. In England there was very little opportunity for people in their class, so we stayed in California.

They got interested in real estate. My mother was smart even though she wasn’t highly educated, and she made some very good decisions. I still worked, but not to the same extent. At seventeen, I had a very tiny part in National Velvet, and gave Angela Lansbury her first screen kiss.

I went to UCLA and got into the Campus Theater. I made many friends, and some of us decided to start our own theater. About twenty of us chipped in some money and we all left school. We found a little empty building that had been a funeral parlor, and fixed it up into the Circle Theatre, and were a big success. That’s when I started directing.

When did you know you were gay?

The theater was open to anyone with talent, and one day a most unusual man showed up, recently arrived from Sweden. Six-foot two with china-blue eyes, he was beautiful. And a beautiful person, I found out later. When we were introduced, he exclaimed, in his Swedish accent, “Leetle Colley! You got me through the Second World War!” He had been in the Swedish navy stationed in some remote place with about three movies that they ran over and over. Goodbye Mr. Chips, in which I played little Colley, was one. “Your face, and your beautiful, innocent smile–It made me realize what the war was for.” If I hadn’t been already smitten, this did it.

I remember sitting in my car. I was just twenty, Nord was thirty. I remember thinking, So it’s true. You are queer. Because there was no denying what I felt for him. We got together and it was beautiful, but it was all very secretive. We were together for three years until Nord had to return to Sweden. Sometimes people think it’s easier when you’re in the theater. In many ways it was–I don’t think I ever felt the same pressure and fear as someone in a small town. My parents didn’t know. That came later.

My friend Ron Randell called from New York, and said, “Get here fast–they’re casting the juvenile lead in Candida.” I flew out right away. I read for the director and I got the part right there. It was the role of Marchbanks, a very difficult character.

Candida starred Olivia de Havilland; it opened on Broadway April 22, 1952, and closed May 17.

I learned a lesson at age twenty-five: You learn a lot more from your failures than you do from your successes. The producer had said it’d be fine. It wasn’t. Well, I wasn’t the first person to have a flop in New York. Another lesson learned. 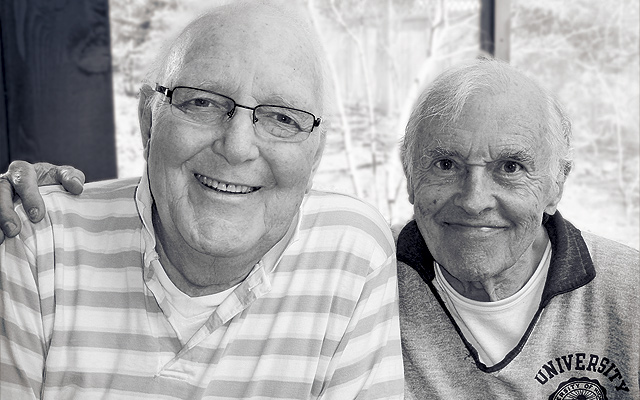 There followed radio and television work, including Sam Spade, Suspense, NBC University Theater. A favorite was Pip in Great Expectations. [Ep 69:1950-1- 1] Kilburn met and worked with dozens of film and theater personalities, in 1951 playing Saint Stephen with James Dean (in his first film appearance) as Saint John in Family Theatre’s Hill Number One. Kilburn was back on Broadway in 1953 with Basil Rathbone in Sherlock Holmes–another failure, and José Ferrer’s more successful revival of Charley’s Aunt.

In 1955, I was hired as stand-by for David Wayne as Sakini in The Teahouse of the August Moon. Wayne was delightful, and was later replaced by Eli Wallach. When Wallach wanted to leave to make Baby Doll, he and the stage manager conspired. Eli said, “I’ll pretend to be sick, and Terry can go on in a matinee.” The producer and director and writer came in to see, and I got the job. My parents actually came to see the play, and it was during that visit that they found out I was gay. My father was wonderful. My mother went ballistic, but later came to understand.

Having done this big, starring part, something happened. I was beginning to lose my enthusiasm and interest in acting. I remember thinking, “Do I want to go back to waiting for the phone to ring?” My father wasn’t well, so I went back to California. The doctors kept saying it wasn’t lung cancer, but it was. I was helping to refresh his sheets with one of the nurses, we thought he was asleep, and she said, “You’re an actor. What have you been in?” When I said, “The Teahouse of the August Moon, my father’s eyes fluttered open and he whispered, “He was wonderful.” He died within a week.

A close friend suggested a trip to Cuba then a spur-of-the-moment steamer cruise and tour through Greece and Europe. Kilburn visited scores of museums, immersing himself in their wealth of paintings.

We ended up in London and I wrote my mother I was staying on. I was born in England and didn’t need a work permit to do television and film–including the worst movie I was ever in, The Fiend Without a Face. One night in 1957, a friend of mine whose wife was doing a cabaret act, said, “Why don’t you come see Annie?” I went, and there, sitting at my friend’s table, was Charles Nolte.

I had met Chuck briefly in New York when I was in Teahouse and he was in Caine Mutiny Court Martial. When I mentioned I was looking for a room closer to the center of London, Chuck said, “I think there’s one coming vacant where I’m staying. Give me your phone number and I’ll call and let you know.”

Chuck Nolte was an icon at that time. He’d done Billy Budd a few years before, and every gay man in New York had his picture on the wall. I wasn’t going to hold my breath. But he did call. And there was a room. He was involved with somebody–everybody’s always involved with somebody–but we started to go to plays together and, most importantly, to the opera. Chuck loved opera and knew a lot about it and I knew a lot about painting after all those museums. We educated one another, and gradually fell in love.

Nolte was very cautious about commitment however. Kilburn, on his way to visit him in Hamburg, decided to go to Stockholm to visit Nord.

At one point I thought, maybe I should stay. But Chuck won out; I flew to Hamburg. From then on, Chuck was really the center of my life.

I came back to California and was directing plays at the Player’s Ring Theater and had a huge success with The Andersonville Trial, that ran for over a year. And Tea and Sympathy, with eighteen-year-old Michael Landon in the lead. Then, something extraordinary happened.

Via a circuitous route, Kilburn was alerted to several telephone messages for him pinned on a bulletin board.

They were from an American man whose mother had died recently and left him a fortune. He was a great Anglophile and wanted to start a theater in the round, in London, with me as artistic director.

I called Chuck: “I’ve had an offer to direct in London.” “That’s amazing! I just got a call to do some TV shows being filmed in Munich. I was going to call you and ask if you want to come?” “Well, yes!” That became our life. Chuck couldn’t work in England, but he worked in Germany, France, and Scandinavia–a lot of television stuff. This new theater, the Pembroke, was getting a lot of good publicity. It was an off-Broadway kind of house, seating maybe 300. I wrote a dear friend, Jerry Lawrence, who with his partner had written Inherit the Wind, and asked, “Would you give us the British rights?

Jerry said yes. This would have been 1960, when I began my association with Andrew Cruikshank, a famous London theater actor who played Henry Drummond in Wind. I did two other plays with him, the British premiere of Look Homeward, Angel, and the one that I’m most proud of, Ibsen’s The Master Builder. All these, and others, transferred to the West End.

Things were still not settled with Nolte, and Kilburn initiated a conversation that changed the course of both their lives, and involved Nolte returning to the States to get advanced degrees and pursue teaching.

Back in LA, MGM contacted me and said, “We’re going to remake Goodbye Mr. Chips in England, as a musical with Peter O’Toole. We want you to play a cameo role–it would be great publicity.” I was set to do that, when the phone rang at one o’clock one morning, and a friend of my mother’s told me she’d had a stroke. I called MGM the next day to say I couldn’t accept the offer. I’ve never regretted that, because I think my presence helped her recovery.

I realized I could no longer keep going back and forth from LA to London, which led me to the Meadow Brook Theatre.

Meadow Brook is Oakland University’s theater in Rochester, Michigan, Michigan’s only LORT theater. Nolte returned to Minneapolis, and the University of Minnesota, receiving his MA in 1964 and PhD in 1966. He bought their Minneapolis home in 1972.

By 1972 I had been running Meadow Brook for two years. It all worked out well–I became Artistic Director and stayed there for twenty-five years. Chuck had started directing plays here at the U. I knew he was good and brought him in to direct one play. Everybody fell in love with him; his plays were successful. Every year he came to Meadow Brook and directed at least one play, usually two.

We worked out our relationship, and often said it was probably the healthiest state for us. Chuck had the home-building, homemaking instinct, while I’m not very domestic. Had one of us given up his work to become a taking-care-of-the-house person that would have been very demoralizing. Happily, we both had successful careers we could share. I don’t know what bonded Chuck and me. Lucky? Boy I’ll say! I mean how many Chuck Noltes are there? He was unique. I miss him every day.

They say that when you work in the theater you become a kind of family, but when the show closes, you never see those people again. That it isn’t always true. Chuck and I kept up friendships, particularly with Peter Thomson and his wife, Jan Puffer, who came here after Meadow Brook to be with Chuck and me. They have become our family

I retired and moved here in ’94; they came soon after. Peter has worked in most of the local theaters, particularly at the Guthrie, Jan is a very sought-after choreographer and teaches at Concordia College and the Guthrie. When Chuck was ill, they were totally committed to helping us. Chuck used to look at Peter and say, “No son could ever have been more loving, more devoted.”

You’ve mentioned your own father’s unconditional love, and your mother’s efforts to understand your homosexuality.

If anybody can say they’ve experienced unconditional love, I would say I did with my father. “I don’t understand those feelings for another man,” he said, “but if it’s what you think is right, it must be right.” My father was born in 1896 and my mother in 1898. That’s why she had such a terrible time adjusting: for her it was, “You’re like this Oscar Wilde?” Her first reaction was bad, but to her everlasting credit, she really worked to understand, and when I introduced her to Chuck some years later, she let it be known in no uncertain terms that that was OK with her. She loved him.

It’s impossible for me to stop–-did I tell you about turning down Marilyn Monroe? Oh, that’s another long story. We’ll wait.