Is ‘My Fair Lady’ Still The Fairest Of Them All? 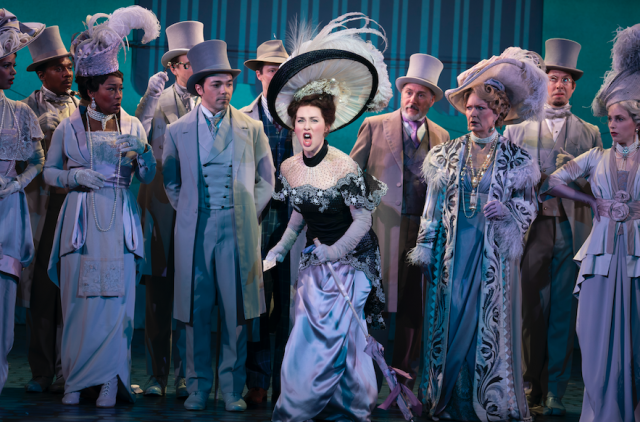 My Fair Lady, the newest show to grace the Orpheum stage in Minneapolis, is nostalgic to say the least and described by many as the “perfect musical.” For an older generation, it resonates of the movie with Audrey Hepburn and the original Broadway with Julie Andrews. For a younger generation, it reminds us probably of a friend’s high school production or maybe our own. It’s a classic musical that theatre and non-theatre people know, and it typically will sell because of that reason. While this production shines like the freshly made-up Eliza Doolittle, the question we ask ourselves is: does this story still need to be told?

My Fair Lady is a bit of a pseudo-rags-to-riches story about a young woman named Eliza Doolittle. Eliza has a barely understandable and thick Cockney accent, which is when Professor Henry Higgins, a scholar of phonetics, makes a bet that he can teach anyone to speak well enough to pass them off as a duchess. The following day, Eliza seeks him out to take him up on the offer and soon begins her lessons with the professor.

This three-hour long production starts a bit rough until Eliza begins her lessons. That’s when the production really begins to pick up energy. The energy on stage and the audience comes alive when Shereen Ahmed, who plays Eliza, enters the stage. Her comedic timing brings a new and fresh feel to this musical. While Eliza tried to blend in to the horse races, Ahmed gives an over-the-top performance that still fits the nature of the show while simultaneously getting the largest laughs of the night.

Laird Mackintosh plays Professor Higgins with a lovely voice and the needed crisp delivery that the role requires. Adam Grupper is Eliza’s father, who leads a fair amount of songs with ease, yet I never understood the point of his role. Another highlight in this cast is Leslie Alexander who plays Mrs. Higgins, the professor’s mother. She brings a different kind of humor into the show which has more of an unconventional bite to it.

While I may not be a fan of the entire show, My Fair Lady does feature some of the very best in musical theatre song canon including “The Rain in Spain.” Ahmed gives a lovely performance with a soaring soprano voice in “I Could Have Danced All Night.” Sam Simahk plays Freddy Eynsford-Hill and has a strong tenor voice in one of my favorite songs from this show, “On the Street Where You Live.”

My Fair Lady premiered on Broadway in 1956; however we are in 2020, not to mention the show takes place in 1912. The obvious and yet somehow underlying question that we have to ask is why revive it? It’s sexist and misogynistic. From the minute they meet till the very last, Higgins looks down on Eliza from both a class and gender perspective. As he teaches her proper language, he belittles her, insults her and demoralizes her by treating her like nothing more than an object. He is the very definition of an abusive partner.

The show does have a sliver of a silver lining as Eliza stands up for herself quite frequently. Eliza is strong and confident in herself.

The last-ditch effort on trying to get this dated show to feel like it can survive in a #MeToo era feels more like a band-aid on something that needs stitches. The ending doesn’t feel right based on everything that is still in the actual script. It still feels strange and not quite right, which really leaves the only option to just stop reviving the show.