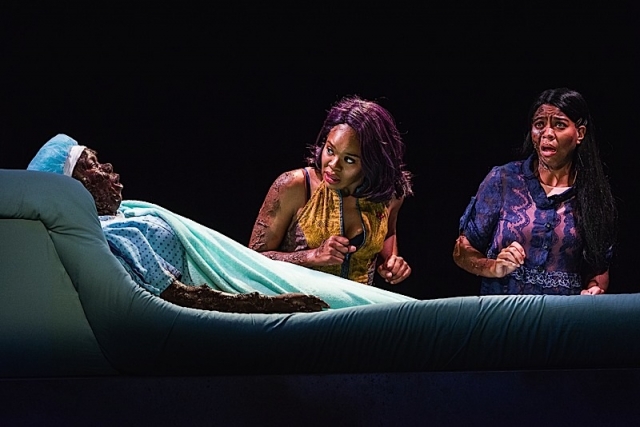 The wrath of God roars forth from a woman in Aleshea Harris’s magnificently bleak comedy, Is God Is. This grisly thriller now runs in a stupendous area premiere at Mixed Blood Theatre. Nataki Garrett has directed the hell out of it and that is no exaggeration. In the context of the play, God refers to a dying African-American woman simply dubbed “She”, portrayed to cryptically eerie effect by Joy Dolo.

She summons her two young adult twin daughters to her bedside, after having been separated from her since they were very small children. Deteriorating in a poor senior citizens center in the southeastern U.S., this mother senses that her days are numbered.

What further distinguishes this reunion is that She was burned and scarred all over her body. Her daughters who had been taken away from her as toddlers at that time were also burned, sustaining major scarring themselves. They’ve submerged their mutual memory of the horror, but She elicits the event from their subconscious. The twins’s lives in foster homes and as social pariahs has relegated them to cruel systematic exclusion by all.

She’s sickbed demand is that the twins seek out their father whom neither has ever met (at least since they were little tykes). Their task: Murder him violently. But She has no idea where the man is. Therefore, the daughters quest in search of him, like an unholy grail. Additionally, all those in his sphere are to be killed and the twins are to bring tokens of their slaughter. Harris echoes harshly the “an eye for an eye” warning from the Bible and Hammurabi’s Code. It is also reminiscent of Dorothy Gayle returning the witch’s broom to the Wizard. 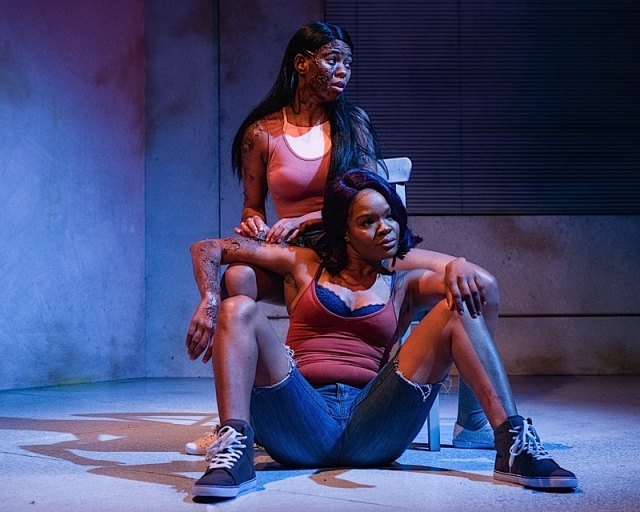 Dame-Jasmine Hughes as alpha twin, Racine, and Chaz Hodges as beta twin, Anaia, are beguilingly symbiotic in ferociously raw performances. Determined Racine steers the reluctant Anaia into bloodsport justified by God, of course. Fight choreographer Bruce A. Young, with shrewd wisdom, has been forthright in staging the violence without pushing the audience out of the riveting spell the production casts. There’s a minimum of actual blood imagery, but enough to definitely drive the point home.

Perhaps Is God Is’s most jolting observation occurs when the twins come upon their father’s second family in California. The tyrant has done well for himself and his new middle class family, providing them material comforts the daughters can barely comprehend. When his present wife, Angie (a perfectly condescending Jessica Roslyn) is confronted by the pair, she is understandably startled. For her, the twins are the black version of “deplorables”. This triggers her to hurl a vicious insult at them, which comes as a reaction from her subconscious, rather than just plain stated pre-meditated bigotry. Angie’s lack of self-knowledge is fatal. This slur, in turn, triggers a gruesomely deadly retaliation. The punishment is far out of proportion to the severity of the insult, but such is God’s will. 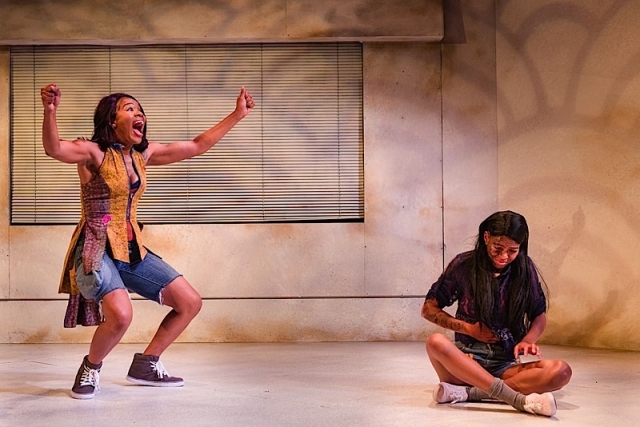 This opens the door to finding out that “Man”, Harris’s name for the father who abandoned them, has also sired twin sons, now in their later teens. Riley (a touching Kory Pullam) is gentle and gay. Scotch (a fittingly repellent Jacob Gibson), is flagrantly misogynistic, actually arranging the twins’s physical bodies so that he can ogle them. Harris also makes a sly dig at pretentiousness in the arts, as the crude Scotch fancies himself to be a poet. Naturally, the objectifying of the twins backfires on Scotch, ultimately drawing his more humane brother, tragically, into the frenzied tumult.

The mother-brothers murder section treads onto terrain that will unsettle some audiences because it surely rates as one of contemporary drama’s supremely transgressive scenes. The daughters metaphorically turn on the black middle class with catastrophically malevolent wrath. The middle-aged black woman of means, the gay teen, and the misogynist become one in the same through the lens of their shared collective guilt. No one is an individual. Hence, they are in turn, objectified beyond redemption, deserving of their extermination. A grim theology indeed.

Is God Is goes on to breathtaking interaction with a magnetically diabolical turn by Kirkaldy Myers as Man, intensified by Mary Shabatura’s nightmarish lighting. Evil runs loose in the world. Toxic masculinity begets toxic femininity. Vengeance is cyclical. Forgiveness is unimaginable. Yes, we concur that it is right that Man atone severely for his maniacal criminality. However, we intuit that the avenging angel daughters have become addicted to carnage as a way of life, and in turn may have turned maniacal themselves. And so it goes…

The play’s action extends across a vast geographical stretch, but the world of the characters, all of whom are black, is psychologically enclosed. Christopher Heilman’s set is barren and spare, evoking the aura of an infinite wasteland. The oddball cinematic sensibility of Eric Mayson’s music and Phillip O’Toole’s sound design co-conspire to heighten the volatile atmosphere. Actor Kevin D. West adds solid support as a man caught in the snare of the daughters’ mission, never dreaming that his own karma would come calling alongside them. God truly does work in mysterious ways. Is God Is unfolds like a mythic fable.