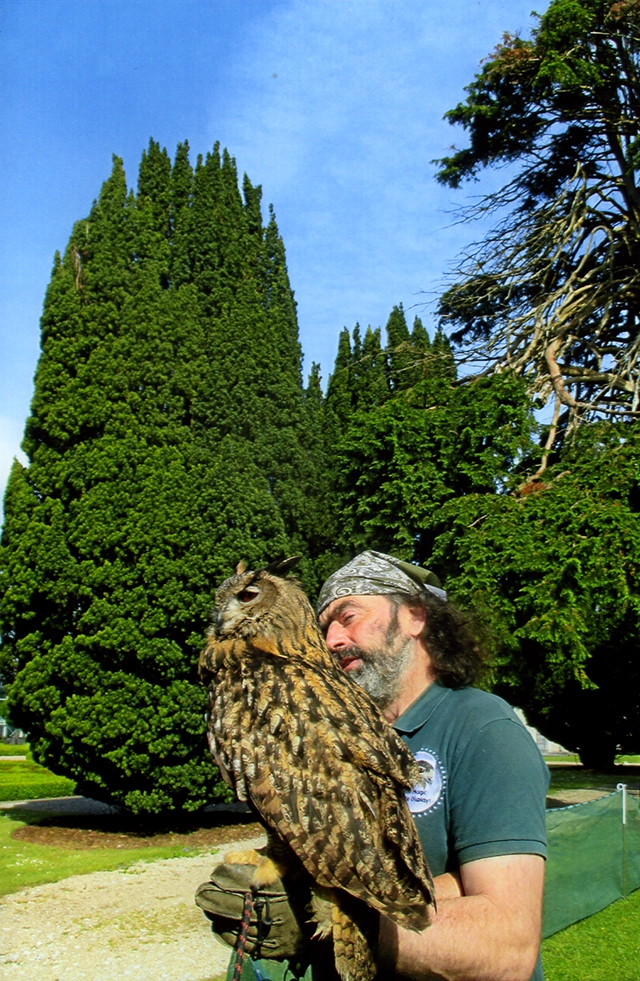 A demonstration of a trained owl at Castle Martyr

Ireland, and no Guinness mugs, no clover t-shirts? Good on ye, as they say around here. We’re traveling throughout the island’s Ancient East, a landscape punctuated by massive medieval castles (in which we bed and dine) and gracious formal gardens to meander, all with nary a tour bus in sight. It’s the real deal, and so are the genial hosts of these family-owned properties, open to the public to help sustain them from ruin and keep the historic legacy alive.

We set forth in County Wicklow, “the garden of Ireland,” eager to inspect Powerscourt Gardens, where twinkle-eyed, red-bearded Alex Slazinger leads us through the property owned by the Wingfield family before him from 1691 to 1961. A graceful, Palladian-style manor house overlooks an Italian garden framing iconic Sugarloaf Mountain in the distance. Its terraces were dug during the potato famine, giving employment to one hundred men as they defined the kitchen gardens, the rhododendron walk, a pond and more. With 47 acres featuring plants from all over the world, it’s been voted “third best garden in the entire world” by National Geographic. Young Alex is not only lord of the manor, he’s its head gardener, toiling from dawn to dusk.

Then it’s on to the Norman-built Kilkea Castle of 1180—the oldest castle in continuous use— to spend the night. Recently purchased by an American couple dedicated to sustaining it, its muscular stone exterior, slit with narrow Gothic windows and crowned by crenellated turrets, hosts a genteel dining room where we feasted on crispy oysters, local crab and beef and Baileys caramel ice cream.

After a hearty Irish breakfast, we set off for Huntington Castle of 1165 in Clonegal, erected as a soldiers’ garrison to control trade “back in the day before much law and order,” says present owner Alexander Durdin Robertson. Today, sheep graze peacefully aside the squat gray structure where, indoors, hunting trophies and clunky suits of armor greet us as we tour the dining room, fashioned like a Bedouin tent, hung with somber family portraits, including granddaughter of legendary pirate Grace O’Malley. 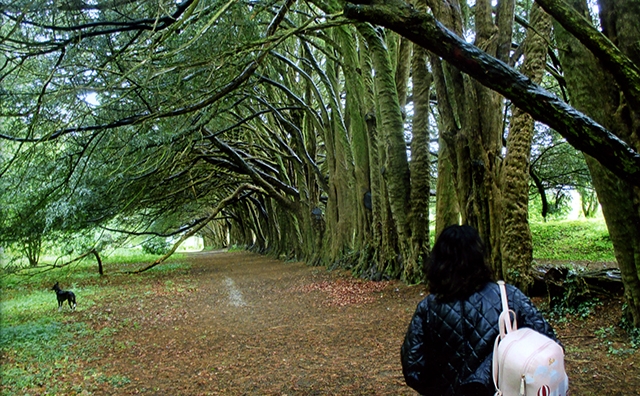 At Huntington Castle, visitors can take the 500-year-old Yew Walk

The castle was the first to employ electricity in the 1880s; peasants traveled from near and far to watch the lights go on at dusk. Its drawing room hosts a trapdoor to a secret, hide-from-marauders chamber. The heirs of the original family live here today amid its ornate original furnishings. However, in the 1970s, a couple of hippies in the clan fashioned an Egyptian-style temple in the basement to honor female divinities. The surrounding gardens, planted in 1680, boast a majestic, 500-year-old Yew Walk.

Next, it’s off to Lismore Castle and Gardens for the Blackwater Valley Opera Festival’s performance of Donizetti’s hilarious “Don Pasquale,” punctuated at intermission by dinner of asparagus salad and guinea fowl amid the festive locals. Lismore’s upper garden of 1620—the longest-cultivated in Ireland—is arranged formally, while its lower gardens, of the 1850s, have adopted the “modern,” free-flowing, natural style of design.

After bedding at Castlemartyr Resort—anchoring a site first occupied by the Knights Templar of 1210, and where Norman leader Strongbow and later Sir Walter Raleigh held sway—we’re treated to an demonstration by its trained owls and falcons, who soar and hunt on its grounds. In turn, each perches on my gloved arm and stares me in the eye. 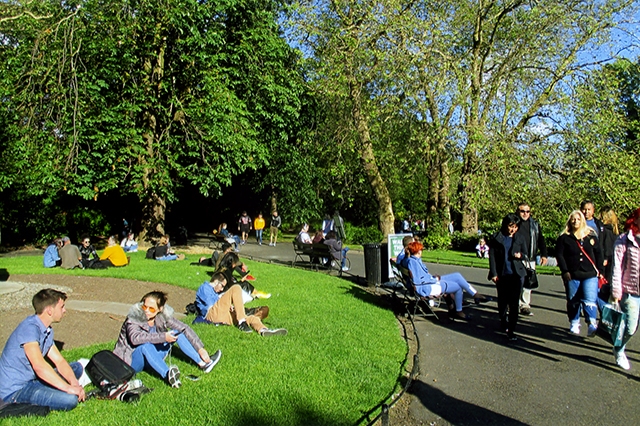 Then off to lunch at Dromana House and a tour of the 13th-century medieval manor and gardens, perched high above the Blackwater River. We’re greeted by Nicholas, whose family harks back to 1680 here, and his wife, Barbara, whose roots run even deeper—back to 1215. Twenty years ago, the gardens had deteriorated into jungles, he says. Today they’ve been meticulously restored. Indoors, Barbara points out a portrait of her great-grandfather, who fought for emancipation, and beyond, voila!—a telephone room, designated to house this revolutionary new form of communication. “And here,” instructs Barbara, “is where Lord X”—a relative, of course—“killed himself” (yes, there’s a ghost)—just one among the spicy stories of love and politics from her family’s trove.

Dunbrody Country House, our home for the next night, is set on 300 acres of parkland and home to Dunbrody Cookery School (classes for one, two and five days) by owner/TV celebrity chef Kevin Dundon. Kevin treats us to exquisite canapés and cocktails of local gin in the mansion’s sunken garden before we head to Loftus Hall—a moody site since the 1700s on the isolated Hook Peninsula—considered one of Ireland’s most haunted mansions. Here, Lorainne O’Dwyer, who introduces herself as a witch, guides through the ill-fated, decaying mansion, where more than a few necks were broken by tumbling down the staircase.

Woodstock Garden, in County Kilkenny, is our final garden tour. Head gardener John Delaney meets us for tea and scones before guiding us through the gardens he’s diligently restoring to their Victorian heyday. The mansion war burned in the 1922 struggle against British landowners. Today the grounds still boast one of the premier collections of conifers in Ireland amid miles of footpaths (with the wider ones made to accommodate ladies’ giant hoop skirts). We tour the garden—walled, says John, “to keep the pheasants in and peasants out.” 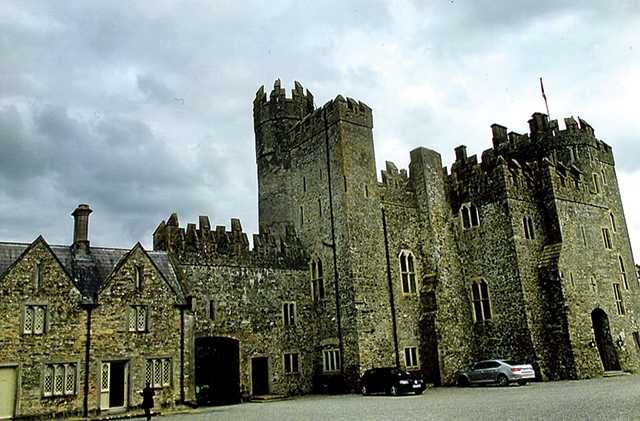 The ancient Kilkea Castle now operates as a hotel

High time for a wee dram, and Ballykeefe Distillery is calling. It was launched on his family’s cattle farm in 2017 by Morgan Ging, where he’s producing gin, vodka and that once-illicit liquor, potsheen, and offering tastings in the former stable.

The spirits gird us for an afternoon’s stroll through the medieval streets of Kilkenny before we we reach our final garden at Burtown House & Garden, complete with Green Barn gift shop and destination restaurant for Dubliners, 50 miles away. Here James Fennel, a noted photographer and designer, is carrying on the legacy of his grandmother, herself a botanical painter, whose passion was returning the overgrown wilds to cozy, informal gardens. James has added a sculpture walk to the landscape here in the Ancient East. It’s calling your name, too. To plan your visit, contact www.ireland.com.

I lace up my running shoes in preparation for a whirlwind tour of charming Dublin, founded by Viking traders on the banks of the River Liffey. Here in the oldest part of town, they erected its first church in 1130. Christ Church remains the city’s oldest building in continuous use. Treading its elaborately-tiled floor, you’ll spy the grave of Anglo-Norman conqueror Strongbow and the heart of St. Laurence, patron of the city. Descend to its crypt to discover artifacts of its past, including stocks used as punishment in 1179, and the remains of a rat and cat found mummified in the organ’s pipes.

Nearby St. Patrick Cathedral, on the site where the Irish saint is said to have baptized converts, is where its former dean, Jonathan Swift (author of “Gulliver’s Travels” in his off-duty moments) lies buried. The two churches combined choirs to host the first performance of Handel’s “Messiah” on a long-ago Easter Sunday.

Wander to the lively Temple Bar neighborhood, with more than its share of bars, indeed. Then tread the lacy Ha’penny Bridge across the Liffey to the Writers Museum (Can the Irish write? Nobel winners aplenty!) and nearby Hugh Lane Gallery of modern Irish art. Its high point, the studio of eccentric artist Francis Bacon, resembles the aftermath of a tornado.

Head back to the riverward along O’Connell Street, pausing at the General Post Office for its exhibit detailing the bloody Easter Rising of 1916. The GPO served as HQ for the rebellion forces, battered and burned by the British Army while seeking independence. You’ll still spot the bullet holes.

Head back to the river for a browse at Winding Stair, bookstore of Irish lit and also storehouse of splendid food (think creamy seafood stew). Farther along the river rises the new Epic Museum, a repository of Irish history—politics, religion, art and music—along with the epic-indeed emigration in huge (and deadly) masses on “famine ships” during the potato famine. The museum also celebrates those of Irish heritage who fared well in the U.S. (many presidents and showbiz stars among them). Then cross the Sean O’Casey Bridge to the Archaeological Museum to learn Ireland’s dramatic history, amid showcases of unearthed Viking jewels and swords and the remains of earlier men, mummified by eons in the peat bogs. Around the corner, the National Gallery celebrates art.

My dinner tonight is at Davy Byrnes, home of superior fish & chips. Then off to O’Donoghue’s, where lively players of trad music (fiddle, guitar, squeeze box, mandolin, kazoo, and pipe) fill the night with ballads and gusto. A pint of Guinness is all it takes to linger. Tomorrow I’ll head to Bang, almost next door, for modern Irish fare, such as a lovely spring pea and garlic soup; warm salad of baby Irish carrots; then cod, lamb or chicken: all Irish staples given a new twist.

Dublin’s Pride Week, June 20-29 in 2019, drew 7,000 people and 150 floats and marching bands to parade on June 29—one of the most popular celebrations in Ireland. For event listings (and there are many, from runs to performances to after-parties), visit www.dublinpride.ie/events. Off you go, and good on ye!