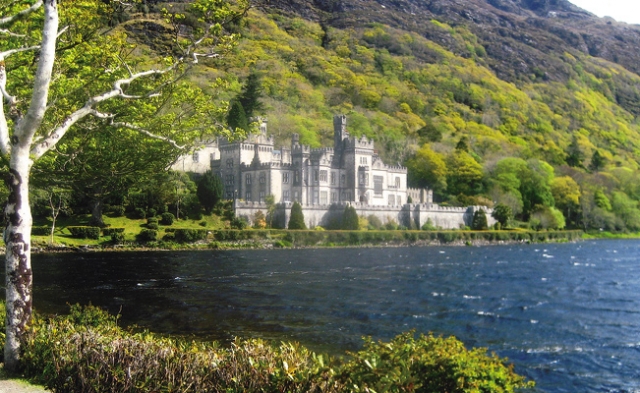 “With 50 million Irish in America,” opines our guide, “we should be the 51st state.” Plus, 23 of 44 U.S. presidents claimed Irish blood. And that doesn’t include O’Bama.

The story of Ireland is a story of migration—both in and out: red hair from Viking marauders and Norman castles from the French. But it was domination by the British—the 1% of the day—that caused the most hardship, culminating in the Rebellion and Civil War.

Galway was a prime departure point. Columbus stopped by to gain bearings from a map of a crossing centuries earlier, still on view in St. Nicholas Church. Recently, Woody Harrelson made the voyage in reverse for a bit of R&R at Galway’s luxe Niall Lodge, where the food alone is worth the journey, even if you have to swim (see online sidebar on food). 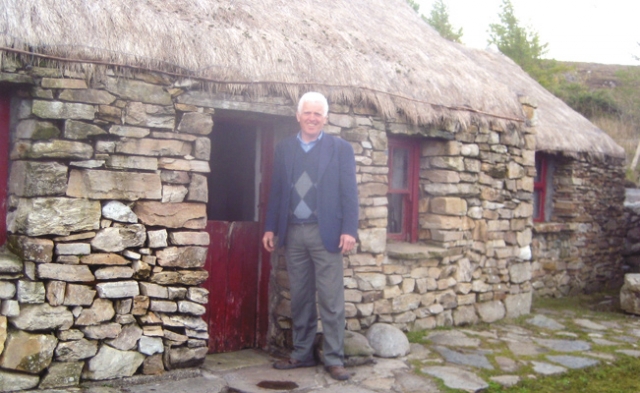 Dan O’Hara’s cottage is a wee bit less posh. It’s preserved at Connemara Heritage and History Centre, a tribute to the farmer evicted during the potato famine of the 1840s—the Holocaust of Ireland—and forced to migrate to America on one of the notorious coffin ships, so named for the fate of its passengers. Dan’s wife and most of their seven kids died enroute.

Today Martin, blue eyes twinkling, lends his tenor to the ballad of Dan aside the cottage’s turf fire, then pours us a drop of potsheen, the gut-blazing moonshine of the day. Martin then shoulders a spade to demonstrate how Ireland’s peat bogs—nearly 20 percent of the land—is cut into logs of turf to serve as fuel. Our driver, John, reminisces, not altogether fondly, about that annual summer exercise on the family farm.

A turf fire welcomes us to Renvyle House, once site of a powerful Celtic chieftan, and since 1883, host to more modern potentates—politician Churchill, poet Yeats, writer Joyce—and moi. I’m strolling the shore where a pewter-colored sea muscles the boulders as clouds slide across purple mountains. Grab a bike, golf club, or kayak before setting out for Kylemore Abbey. 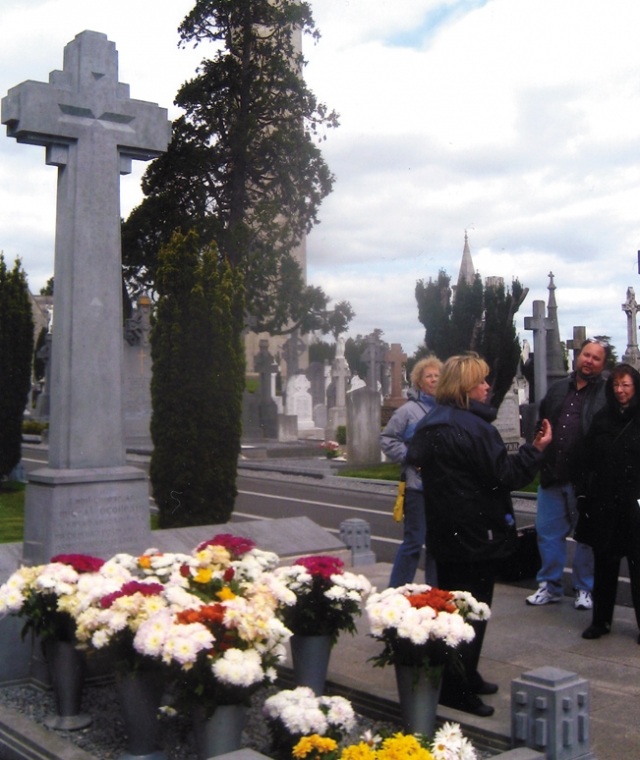 The romantic Gothic Revival mansion was built in 1867 by a millionaire for his bride. Later a girls’ school for the likes of once-pupil Angelica Huston, it’s now convent to 12 elderly nuns and open to tour. Take a turn around the intricately-patterned walled garden before heading on.

We pass Croagh Patrick, Ireland’s holy mountain, where Patrick, its patron saint, spent 40 days fasting and praying. But—thank goodness—no fasting was to be had in Westport, our destination. Winner of Ireland’s annual Tidy Town competition, the high street glows with newly-painted shopfronts in all shades of the rainbow, including the lipstick-red of Matt Molloys. Yes, the owner, of Chieftans fame, frequently plays here. Tap your toes—there’s no resisting—while the fiddle, mandolin, squeeze box, and flute percolate a lively ditty. Molloys offers yet another claim to fame for pouring the best Guinness to be had, pulled by a barman who knows what he’s doing. Slowly, slowly. A rest to settle the foam. Then a top-up and “Slainge” (Cheers).

Next morning, we don our Wellies and head for Ballycroy National Park, launched in 1998 to showcase, and preserve the panoramic Atlantic blanket bog—a vast, uninhabited terrain of 11,000 acres. “How’re youse?” inquires Denis Strong, who leads us to the Visitors Centre to explore its interactive exhibits. Push a button, and Winnie, via video, explains her childhood’s cookery—churning butter, cooking boxty (potato pancakes), killing and curing the pig. Then Denis takes us walking the bog itself—like slipping about on a soggy trampoline, past turf cutters stacking peat logs into pyramids.

Then on to Achill Island, its 3,000 inhabitants dwarfed by the wild moors and majestic cliffs that hem them—also victim to the infamous famine. We visit the deserted village of Slievemore, settled since 4,500 B.C., declares Jerrod Mangan, pointing to prehistoric burial tombs. We scramble among the 50 tumbling stone cottages, once housing families of 10 and their cattle: one tiny window (larger=more tax), a hole in the roof (chimney=tax), whose thatch was burnt by absentee landlords when evicting families unable to pay rent, much less feed their families. Then on to also-impoverished Addergoule and its new Titanic Memorial. 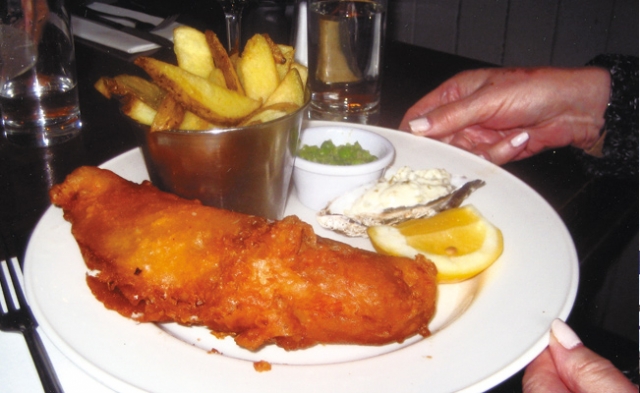 Why here? Because, in the famine’s lingering aftermath, there were no jobs, no money. So 14 of its sparse populace booked steerage on the Titanic in search of a better life. Eleven perished. But this is more than just another Titanic story. As guide Alex Nolan deepens the tragedy, men left behind, without jobs, couldn’t marry. Girls faced spinsterhood. Those leaving were given an emigrant’s wake—a final party, for they’d never see their families again.

Today, the church bell rings at 2:30 a.m. every April 15. Inside, stained glass windows depict the disaster. And a new park, centered by bronze figures of those emigrants, shows the hull of the ship; a hearth, center of an Irish home, and a gable with open window, signaling a welcome, should any return.

Foxford Woolen Mills, back on the mainland, is more than just a gorgeous shopping op; it’s also a symbol of a turnaround in Ireland’s fortunes. Here a nun, sent to teach those in misery, put first things first: jobs for the hungry. Strong-willed and foresighted, she envisioned harnessing the river to power a woolen mill employing town-folk and strong-armed even wary Protestants into making it happen. Today, the mill offers an interactive history tour as well as must-haves for home and body. 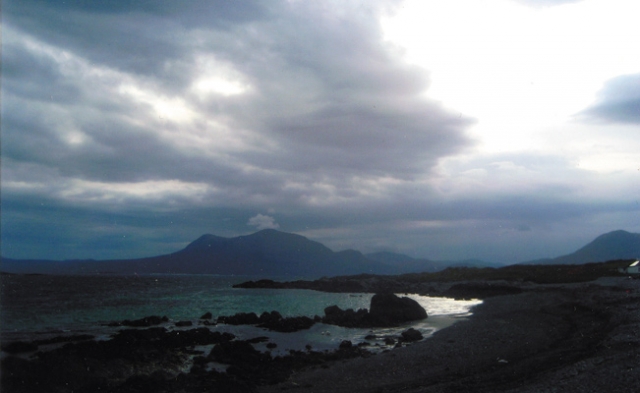 Then off to Dublin, where we trace Ireland’s history a final time at Glasnevin Cemetary, established in 1832, where 1.5 million lie buried—everyone from the heroes of the Rebellion to ex-mayor LaGuardia, playwright Brendan Behan, Joyce’s parents. Here Michael Collins of The Rebellion (Liam Nisson in the film) is memorialized, and atop a mass paupers’ grave, the stone of Parnell: statesman, hero. To salute them, we retire across the street to Kavanaugh’s, aka Gravediggers’ Pub, where it’s “Howya? How ya keepin’?” as we lift a final pint.