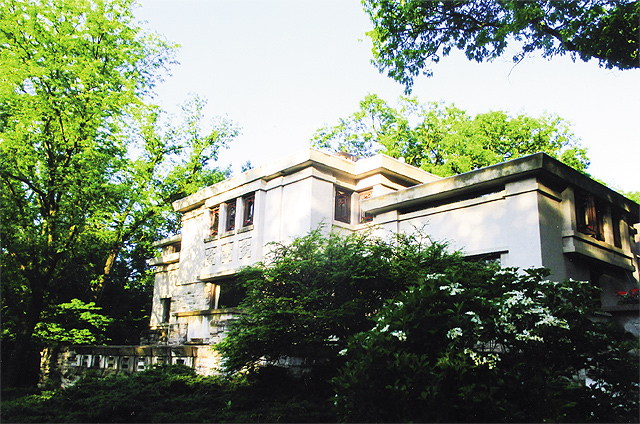 I’m inside the brain of Frank Lloyd Wright. Well, that’s what it feels like: the shiver of awe and delight aroused by sleeping in the only remaining hotel designed by America’s most famous architect, dining in its restaurant, relaxing in the bar.

And where, exactly, is this gem of Prairie School design? Smack in the middle of the prairie. In Mason City, Iowa, to be exact: 135 miles dead south of the Twin Cities. A town boasting the largest collection of Prairie School architecture in the whole wide world designed by Wright and his disciples—23 notable buildings—which keeps my camera busy on a self-guided walking tour. I bump into devotees from Holland and Japan on the same mission, as if tracing the path of a holy saint.

The obvious question is, why here, amid the corn and soybeans? Turns out, one of the town’s patriarchs enrolled his daughters in the Spring Green, Wisconsin school run by Frank’s aunts and home to the architect’s studio. While visiting, the gent became so enthralled by Wright’s design statements that he lobbied for the renowned architect to design the bank and hotel that the town was planning. The Park Inn Hotel debuted in 1910. And while in Mason City, Wright was asked to design a house for the Stockman family—the only FLW dwelling in Iowa today open to tour.

But the Prairie style was embraced with far more fervor than Wright himself, thanks to stories of his extracurricular romances. He became persona non grata, so his associates and followers took on the call for homes honoring the Prairie precepts: a flat, horizontal roof line; fireplace in the middle of the dwelling with a floor plan rotating around it; symmetrical, geometrical details that connect to nature, especially in the use of earth tones. Visitors can tally these as they tour the Stockman House (the shag carpet and lowered ceilings of later “improvements” removed) and adjoining Architectural Interpretive Center, showcasing photos and models of the city’s treasured homes (grand gift shop, too). 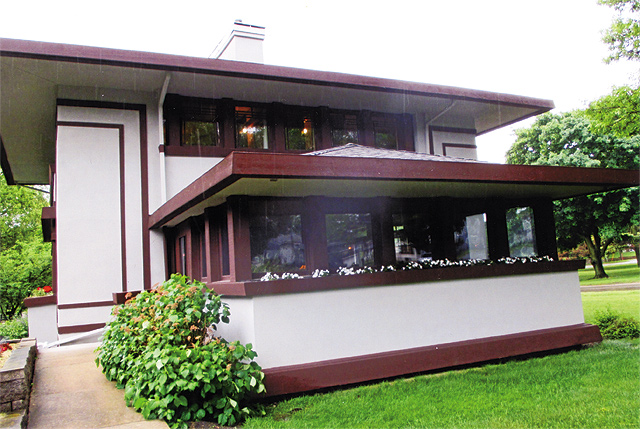 The hotel fell on hard times and was spliced into offices and such, until a visionary group founded a nonprofit to restore and re-open it. “Spend money on WHAT?” was the typical response of aghast locals until it re-opened in its original glory in 2011, authentic down to the art glass ceiling in the parlor and plaster walls embedded with Wright’s original fan-shaped motifs (free tours offered).

Not only was an iconic building saved, so was the town. The hotel anchored what even those skeptics now hail as the River City Renaissance, a nucleus for attracting businesses and projects like the Sculpture Walk, an annually changing outdoor exhibit of two dozen statues (walking maps available) and a gussied-up Central Park facing the hotel, whose Civil War hero on a pedestal oversees picnic tables and barbecue grills amid the swaying maples.

The renaissance lured young Catherine Field from Mankato to open Coffee Cat, where she serves homemade scones and lattés amid local art and live music in tandem with the bookstore next door. “I decided to take a chance,” she says, “and in the eight years I’ve been here, I’ve seen Mason City explode with new energy.” 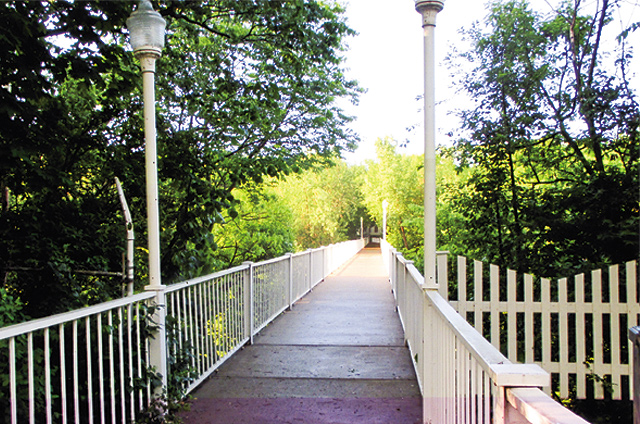 Bartender Zach Avila, of the Historic Park Inn, agrees as he stirs his signature 43N 43W cocktail, born of Templeton rye (“Iowa’s most renowned liquor,” favored by Al Capone) and bitters that he creates by foraging the Iowa plains. Zach tipped us off to the Suzie Q Diner a block away, whose owner entertains guests with magic tricks while awaiting their eggs over easy.

The Northern Steakhouse, launched in 1920, has seen its customer count catapult as well, says Ann, a family member of the founding Greek immigrant clan, who now find customers settling in for a three-hour wait for a table on weekends. The town has changed, she’s happy to report, but not the menu: Iowa beef served with a side of parmesan-dusted spaghetti and the house salad—embellished, as it was in 1920—with a quartered egg and pickle (“That will never change,” she declares). Dave Escher, current owner of Birdsall’s, still scoops homemade ice cream (“get your licks here”) the way its founders did. He also notes an uptick of lickers since the Renaissance, especially during peach season, when his best-seller sells out fast.

The MacNider Art Museum—a thatched English Tudor home of the 1920s that would make Frank shudder (“Leave European style for Europeans; create something American for Americans!”)—enchants visitors with its proud collection of all-American art, whose highlight is a cache of 20th century prints by boldface names like Chuck Close, Andy Warhol, Robert Rauschenberg, and glassblower Dale Chihuly. Then there’s also the collection, if you will, mentioned by Bartender Zach, of the town’s iconoclast, Max Weaver, the self-appointed “Mayor of Midnight,” who skulks around at that hour collecting the detritus of Mason City—think old gas station signs, road repair cones, and broken bicycles to sculpt his “found art” into a warren of collages on a vacant lot. 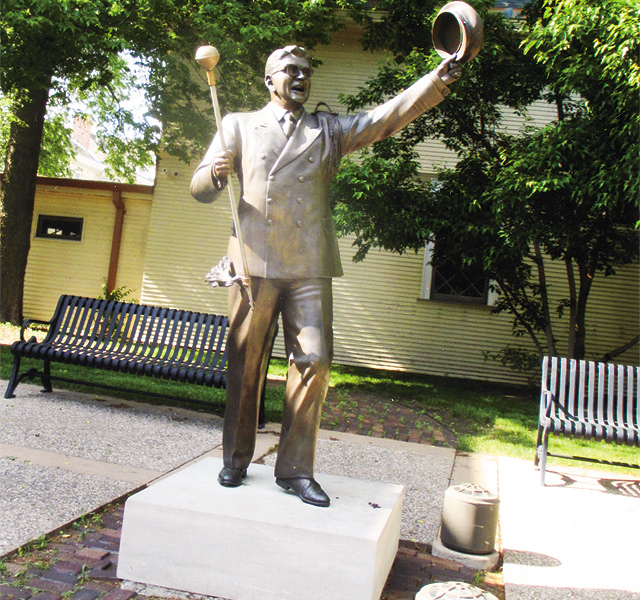 Meredith Willson’s The Music Man statue outside the museum in his honor. Photo by Carla Waldemar

Mason City’s second favorite son bore little love for the first man to gain fame. Composer Meredith Willson is celebrated in Music Man Square in a museum erected to celebrate his famous all-about-Iowa (Mason City = River City) musical, The Music Man. Wander through a collection of band instruments, a silent-movie theater playing songs he wrote for Charlie Chaplin, the flute he tootled while in Toscanini’s orchestra, and a reproduction of the 1962 movie set, including the Pleez-All Billiard Parlor (“Trouble that starts with T, and that rhymes with P, and that stands for pool”). His Victorian boyhood home next door (“just what Wright was trying to get away from,” says our tour guide) discloses that his sister, Dixie, joined the circus. Music Man’s Professor Harold Hill is said by some to represent bad boy Frank Lloyd Wright, whose morals didn’t suit the folks of River City. In some twist of irony, or fair play, the river-spanning bridge leading to that cache of Prairie homes is named for Willson. By the way, the Guthrie Theater will stage The Music Man next June.

To plan your trip, visit www.visitmasoncityiowa.com.

You Gotta Know the Territory!

Near Mason City lie several small towns worth a meander.

Charles City, to the Southeast, displays the girlhood home of Carrie Lane Chapman Catt, an 1865 “diamond on the prairie” that discloses the singular story of this barrier-breaking woman. Carrie, at 13, was instructed by her dad that “Voting is too important to leave to women.” She begged to differ and became a driving force in passing the 19th Amendment in 1920 giving women the right to vote. Catt was second in command to Susan B. Anthony and became her hand-picked successor. Earlier, she graduated first in her Iowa State college class (the only woman); became a newspaper reporter (only, again), and voted Superintendent of Schools in Mason City (only, again, and voted for by men whose wives had not yet achieved the ballot). She negotiated a pre-nup that assured she could “devote two months in spring and fall to suffrage work.” She founded the League of Women Voters and graced the cover of Time Magazine.

Next, peek in at the All Iowa Lawn Tennis Club—a grass playing court painstaking constructed by devotee (nut?) and farmer Mark Kuhn to replicate exactly the centre court of Wimbledon—the Field of Dreams of tennis. Stop by for a game; it’s free.

So is the Mooney Art Collection, housed in the town library, a gift from native son Arthur Mooney, and another who-knew discovery. He collected prints of the world’s most revered artists—79 in all, including six Rembrandts, as well as Durer, Goya, Monet, Matisse, Chagall, Dali and another Iowa native, Grant Wood. It’s like a 101 course in Art Greats.

Whitewater at Riverfront Park is Iowa’s first whitewater course—also free—open for kayaks, tubes, and boaters: a four-mile course at the Class 2-3 level, and a safe DIY experience. Bonus: a sculpture-punctuated shoreline path with exercise stations erected by the town’s Girl Scouts and a stone-paved amphitheatre for entertainers.

Surely you’re starving by now? 3C Bistro to the rescue, serving faves like corn-crab chowder; pasta plumped with asparagus, artichokes, and sundried tomatoes; and a grand Philly sandwich. Or grab a cup of java at Aromas, founded by a disenchanted Boeing engineer who left Seattle in search of small-town life. Since founding the coffeehouse nine years ago, he’s roasted and sold 3,000 pounds a week (the population of Charles City is 4,000—clearly a caffeinated town),  www.charlescitychamber.com

Clear Lake, to the west, lives up to its name, as you can see riding the paddlewheeler Lady of the Lake as it traces the shoreline of what its owner, tongue securely in cheek, calls “the Hamptons of Mason City.” The boat also boasts a bandstand and dance floor while Clear Lake also has bike paths along its 15-mile circumference and swimming beaches, too.

But I guess you’d expect that in a town hosting the famous Surf Ballroom, where big bands have delighted dancers since the 1940s, known as “home of rock ’n’ roll”—and more somberly, where Buddy Holly played “the day the music died” when his plane crashed nearby in February of 1959. Tour the ballroom, take a dance lesson from expat Margaret Maserczyk of Liverpool, who instructed us in the British Stroll. She brings the active Buddy Holly fan club from her English city for the annual Winter Dance Party. Pay homage at the crash site, marked by a giant pair of Buddy’s black-framed glasses, in the middle of a cornfield (directions given at the Surf), where mourning fans leave tokens, like a whirligig of revolving Jell-O molds. www.clearlakeiowa.com

Nearby, Forest City’s Pilot Knob State Park marks the second-highest point in all Iowa (you won’t need an oxygen tank) in a leafy forest preserve. A bigger draw is the world headquarters of Winnebago, launched in 1958 to bring employment to the community and today the biggest, most renowned manufacturer of mobile homes. On a free tour (no reservations needed) you can watch the behemoths come together at the rate of 38 a day. If you can spare upwards of $200,000, take home a souvenir.  www.forestcityia.com