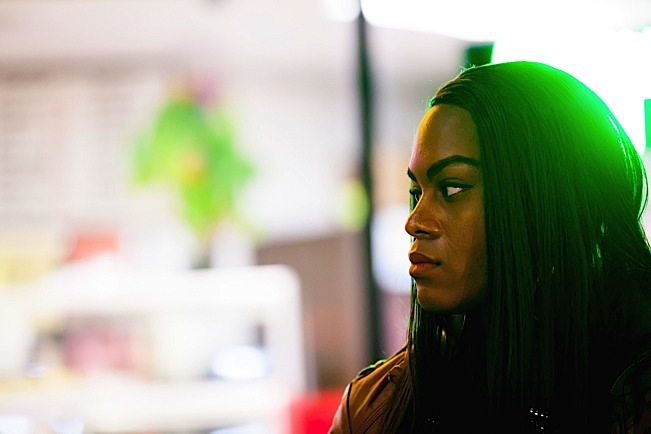 Tangerine is a masterpiece indie film that will rub some people wrong and send others, like myself, into raptures. This gritty look at two irreverent transgender sex workers of color portrays a triumph of the human spirit amidst an economic system that relegates the poor, especially, the poor of color, to extreme measure.

I got in touch with Sean Baker, Tangerine’s director, and asked about thoughts and questions the film raises. By the way, the Tangerine was shot on an I-Phone!  It’s visually stunning and graphically realistic. 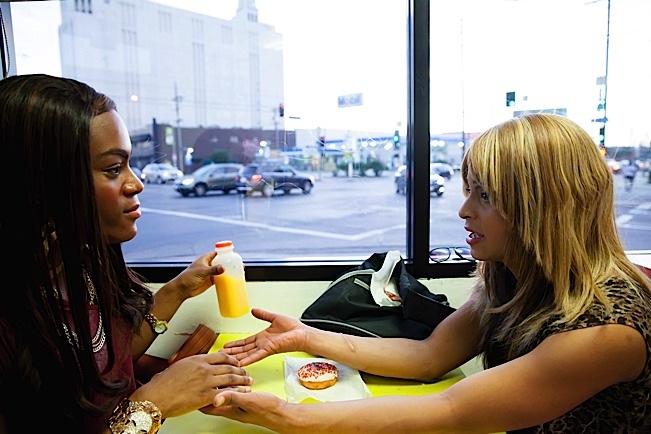 JT: I think Tangerine is without a doubt, a breakthrough in glbtq filmmaking. There are various reasons for this. First off it’s about an under-reported part of our community and it boldly reveals people making the best they know how of desperate economic circumstances. So often, as wild as it sounds, it is assumed that glbtq folks don’t have serious financial issues. What’s more, Kitana Kiki Rodriguez and Mya Taylor as the two main trans characters, never seem defeated by such dire economic circumstances, as well as racism.

SB: Thank you John. Yes, it is true. The TWOC sex workers that we focus our story on in Tangerine are not only marginalized by the general population but they are also dealing with marginalization within the lgbtq community as well. Their isolation probably has to do with a combination of racism and economics but also a lack of leadership and voice. And they have very little representation due to the lack of means. It should be noted that the unemployment rate for transgender people of color is four times the rate for the general population. It is a very complex web of discrimination and oppression that have forced many TWOC’s to turn to the underground economy in particular sex work.

What Chris Bergoch (Tangerine’s co-screenwriter) and I observed is that these woman have incredible will and determination not to be defeated. I personally can not imagine the strength it takes to fight this defeat on a daily basis. This is also why so many from this community turn to drugs and why the suicide rate is high. A national survey reported that Black trans women have the highest suicide rate in America. 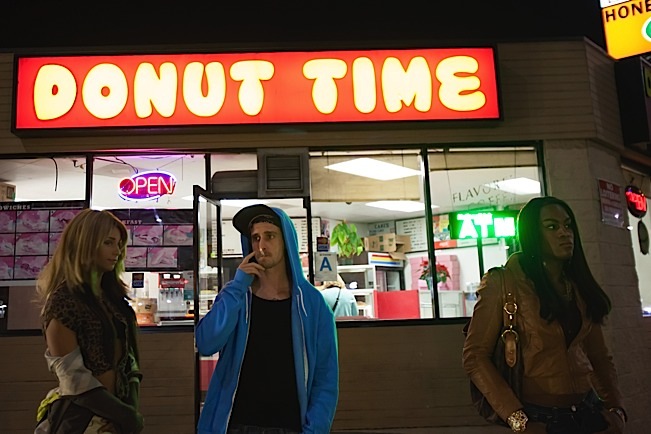 JT: Though I’m sure it could not have been intended, Tangerine has come along at a time when glamorized views of the wealthy and well-connected Caitlyn Jenner have bombarded mainstream media. You must have had reactions from people over this. Some were probably grateful. But I wonder if some reactions have been that such flawed characters are not good for the glbtq public image. Ironically, it’s films and plays about flawed characters are why we go to the cinema and the theater.

SB: There have been mixed reactions. I think most of the negative reactions are from those who haven’t seen the film yet and are concerned that the film perpetuates the stereotype of the trans sex worker.  But quite honestly, our approach to this subject matter is very different from what they may be expecting. Our subjects are trans sex workers however the characters of Alexandra and Sin-dee are fully fleshed out and we feel they transcend the stereotype. Plus, I feel that avoiding stories from a particular group of people, just because they live in dire straights, is extremely dangerous… it leads to further isolation of an already isolated sub-culture. As Laverne Cox wrote in her beautiful essay about hers and Caitlyn’s celebrity, “Most trans folks don’t have the privileges Caitlyn and I have now have. It is those trans folks we must continue to lift up, get them access to healthcare, jobs, housing, safe streets, safe schools and homes for our young people. We must lift up the stories of those most at risk, statistically trans people of color who are poor and working class.”

JT: Tangerine really confronts fixed ideas on the nature of desire. And not only of naive straight folks, but of many of us gays and lesbians who supposedly “know it all”. James Ransone’s character is a macho street-smart studly dude who doesn’t seem to hide his attraction and emotional connection to MTF trans folks as well as cisgender women. At least that’s my take on him. This may not seem extraordinary to those of us who have spent time in various club scenes, but I imagine this won’t compute with many in the straight mainstream and the assimilationist realm of gayness and lesbianism who see only binary forms of desire.

SB: True… and his character is based on many individuals we met in the area and were very open and confident regarding their preference. I also see Chester as someone who has come from nothing, has nothing to lose and could care less about how the general population views him. Therefore he can be open about his preference. In a very sad way, that’s a positive thing that has come from his marginalization. Chester is pretty reprehensible however unlike most of society, he is progressive in his attitude and openness. 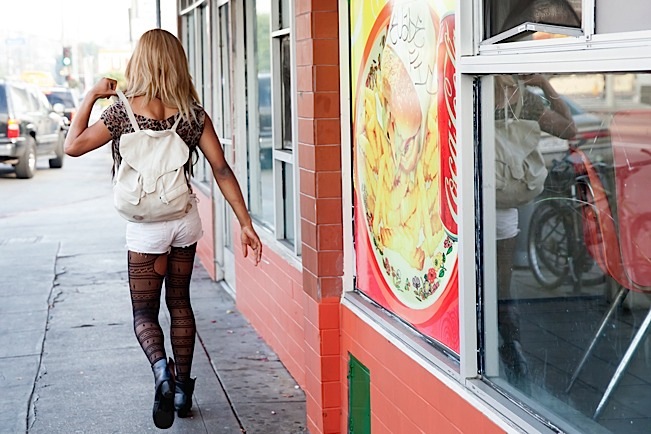 JT: I recently watched some John Cassavetes films within the space of a week. As you know, he is considered by many to be “The Father of American Independent Cinema”. I had the feeling that if he were still alive, he not only would have loved the spirit Tangerine comes out of, but that he would have simply plain out loved the film.

SB: Well, that’s the highest compliment. Cassavettes is a hero and without him, cinema would be very different from how we know it today.