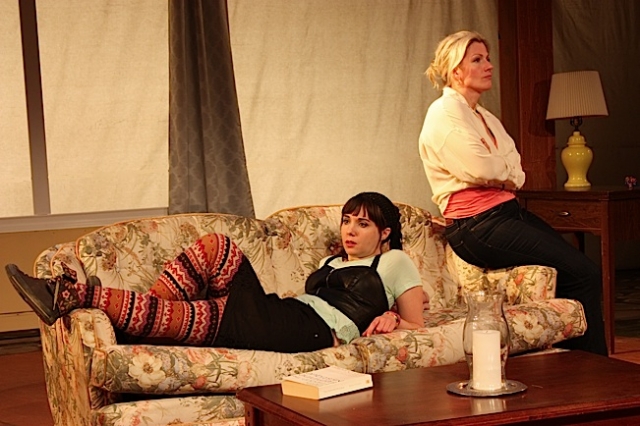 One wonders how much the title of playwright Gina Gionfriddo’s landmark comedy Rapture, Blister, Burn may be a sly tribute to the author of the astonishing poetry analysis, Break, Blow, Burn by the woman who turned feminism, gay lib, and general sexual discourse on its head a generation ago, Camille Paglia. Though the play is not a comedic version of Paglia’s viewpoint, it reflects the freedom of feminist discourse that she covertly and overtly yearns for in her essays. Gionfriddo is her aesthetic spiritual daughter.

In Rapture, Blister, Burn Gionfriddo humanizes points and counterpoints that backlash started and has been yielding ever since, as well as previous waves of feminism. And No! You don’t have to be a women’s studies major! Like the other great feminist comedy masterpiece that was a feminist take on feminist misapplication, Wendy Wasserstein’s Third, and essayist Paglia when she is in top form, this is a play with universal power. The playwright brings forth ideas about the triumph of degradation as entertainment, legitimate comments on the pornographic influences on the humiliation of Muslims at Abu Ghraib, the possibility of women’s empowerment from sexual raunch, pros and cons of the internet and how it can affect fate of male/female relationships, and what many will see as a shocking, though not blanket, appreciation of right wing icon, Phyllis Schlafly.

As with the ideas-laden plays of George Bernard Shaw, Rapture, Blister, Burn manifests varying feminist and perhaps anti-feminist philosophies in the mouths of its characters and makes them fully human. The rekindling of an unrequited middle-aged love is built on Shavian recreational intellectual conversation that spirals into a kind of Waterloo for all the characters, except perhaps the wise elder, Alice. She alone, has faced existential truths with emotional balance. This crackling style is brilliantly realized by the 20% cast. It’s as masterful a production as the play is a masterfully written play.

The miraculousness of director Anya Kremenetsky is that her superb cast is 100%-plus human in every single moment they’re on stage. This is worth noting because few contemporary plays are as drenched in the continual expounding of ideas as this one. Yet the piece never seems didactic! Not for a second! Kelli Gorr’s Gwen, a wife and mother,  may unnerve you with what seem like jerk-knee rationalizations about many feminist articles of faith, but she makes valid points. Randall J. Funk’s Don, Gwen’s academic husband, may repulse you with his porn dependence at the exclusion of actual sex, but for all his flaws he’s a good imperfect guy. Rachel Finch’s let-it-all hang-out student/reality show assistant, Avery, may also repulse you and annoy/endear you with her smart comebacks in defense of what springs from the sex-positive feminism that the great Paglia gave voice to when all around were losing their heads and blaming it on her. Yet Avery is an admirably adventurous truth seeker. Indeed, all the characters are all flesh and blood and they also reflect much more than what I’ve just described. Gorr, Funk, and Finch are all three in top form.

Renee Werbowsky plays protagonist Catherine, a celebrity academic who you may imagine may have once drank the Dworkin/MacKinnon Kool-Aid and has ultimately amended that into a reasonably intelligent overview. But even so, it still doesn’t answer some of life’s existential problems and Catherine knows this. She has returned to her home town to supposedly look after her mother, Alice, who is recovering from a heart attack. But Catherine’s semi-conscious ulterior motive is to rekindle her love for Don. 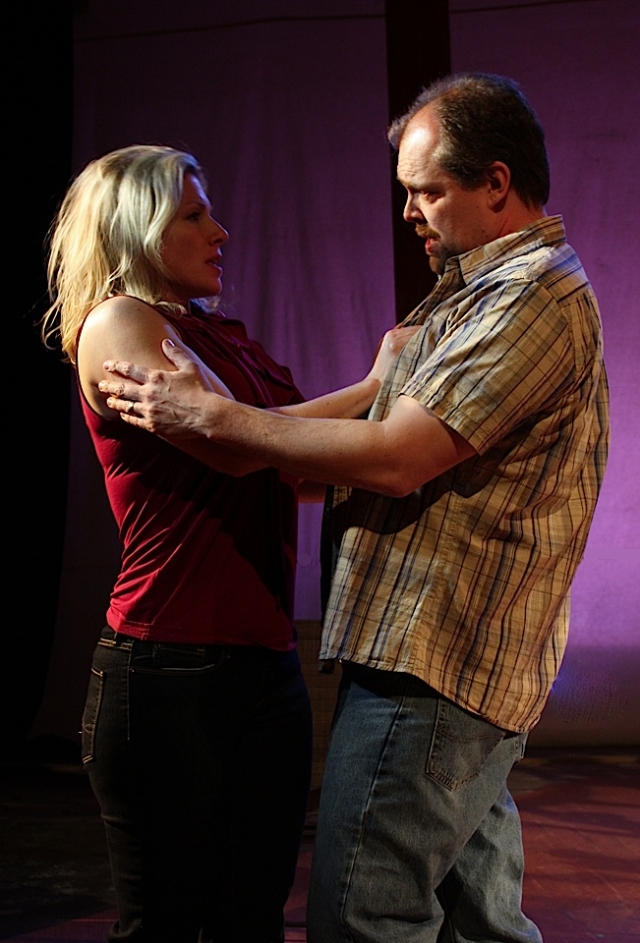 Another miracle: Rapture, Blister, Burn for all its intellect, is profoundly emotional to its core. Its remarkable examination of middle aged love is rare in its richness and dimension. Funk and Werbowsky peel away the layers of illusion and baggage that often mars love between people over 40. Interestingly enough, of the two, Catherine is the one in the deeper currents of the “mid-life crisis” proverbially assigned to males. Is this one of the trade-offs of being a single woman? The chemistry between the two is palpable. Funk, who is known for his fine classical performances, is splendidly contemporary and courageous in how he reveals the flaws of a man who is still pretty darned lovable. Werbowsky is magnificent as a woman who despite her flaws and illusions has a fascinatingly beautiful way of ultimately seeking her truth. By the end of the play she may have found few answers but she is wiser.

Alice is a powerful image of an older woman. It’s part, though not all, of why I call this play a landmark. She tells the younger women about the stigma assigned single men in decades past who never married. Moreover, Christine Sweet is so deliciously winning as the elder that she can even make us consider that right-winger Phyllis Schlafly may have actually had some legitimate things to say about the women’s movement. That I’ve now said this, it may compel some of you to not see this show, but it would be your loss. So knock it off and see 20%’s brilliant staging of Rapture, Blister, Burn.  It doesn’t invalidate feminism but points out that like anything, it has to change to not only suit the times, but to keep its connection to humanity and the common good.

There is still a bias against progressive writers who take on the orthodoxies of their movements, especially among their own. Another superb playwright is African-American playwright Lydia Diamond whose Stick Fly, like Gionfriddo’s masterpiece, puts the old pity party approach to majestic shame. And the mention of Paglia’s name still turns up the smug prissy snoots of many of my generation and older. But I say: You go grrrllls!!!!