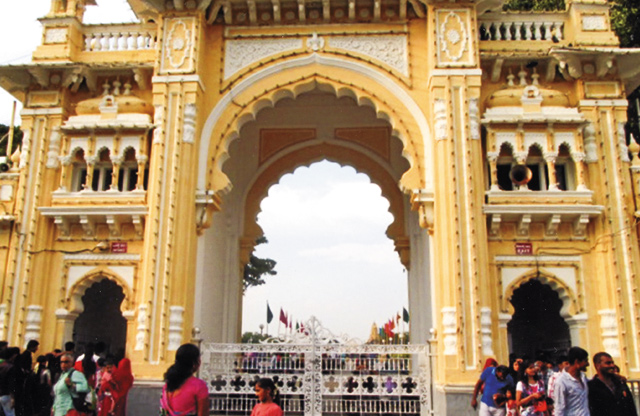 Grand gateway to a maharaja’s palace. Photo by Carla Waldemar

“Incredible India”—that’s what the promos promise: an understatement if there ever was one. The land is an incessant carnival of sights, sounds, smells and color—especially color: every moment an over-the-top immersion in an action game. They call it “organized chaos.” I call it “spectacular.”

Traffic becomes an extreme sport involving trucks, buses, autos, rickshaws, tuk-tuks, motorcycles, and yes, cows, all of which follow uniquely personal driving rules, in which the only constant is a cacophony of honking horns. The climate observes three seasons: monsoon, hot, and hotter. Personal space shrinks to zero among its billion-plus residents, who reside everywhere from maharajas’ palaces to garbage dumps.

I’d explored Northern India on past visits; this time, the less-traveled south (we were often the only Westerners), from the east coast’s Bay of Bengal to the western Arabian Sea. Two separate Indias, insists our guide: the food is different (more seafood), as are the languages and colors—saris in tamer hues, but houses in psychedelic tones of Pepto pink, hazard orange, and phosphorescent green. The people are friendlier, eager for photos, beckoning us into their homes.

I’d purchased a two-week, 15-person tour offered by Overseas Adventure Travel (www.oattravel.com ). It’s that blessed “promise less, deliver more” experience where we explore UNESCO-cited temples and palaces, nose through street markets, and cool off in hotel pools. But what’s not in the brochure is what thrilled us most: the spontaneous (“Driver, stop!”) happenings our excellent tour guide, Sudha, provided. 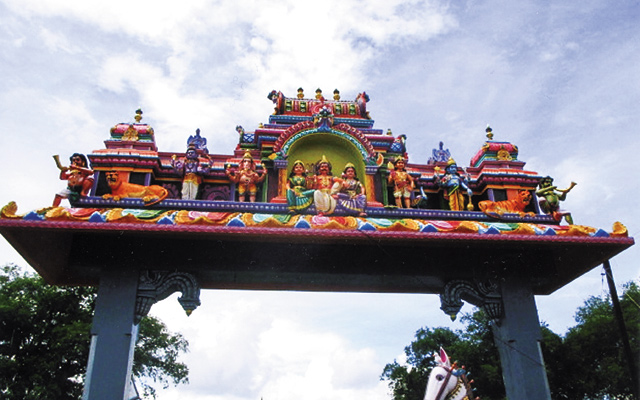 First stop, Chennai (former Madras). The promised attractions: a waterfront, where no one swims but families swarm for promenades and couples for snogging, and the grand fort left by the Brits. The bonuses: visiting a temple of Animism, where we watch the devout shave heads to offer hair to the gods and light cigars to deter bad spirits. A rickety train ride across town to a locals-only café for lunch of dosa and sambals. The blessing of our bus by a priest who burns camphor in a coconut shell to insure a safe journey.

We drive past rice paddies teeming with squatting women. In a small town, school kids in uniform wait for their bus. We hop out of ours to visit with a woman from the untouchable caste as she searches for castoffs to sell. Then we hop into the back of a pickup truck to tour its streets, intensely decorated for a festival, as people wave and grin for photos, including the family of four posing on their tiny cycle. We stop at a Muslim butcher, cleaving beef (rare in this cow-loving Hindu country) on our route to Manchipuram, a city of 1,500 temples. We visit the magnificent eighth-century temple of Shiva and his bull (aka his Mercedes) with sensuous carvings crowding every pillar. We meet a wedding party, then a priest dressing Shiva’s statue, while pilgrims sleep on the stones after a long journey.

Then Mahabapuram, a “small” town (no town is small in this country), where our Radisson Blu is right on the main drag. Attractions: a historic cache of amazing, large-scale sculptures, including Five Rathas—temples—each carved from a single, solid rock, along with life-sized stone elephant and lion, all from 620 A.D.; a huge, sculpted bas-relief of gods and animals, depicting scenes from legends like an action comic; and the Shore Temple, reaching into the bay, guarded by platoons of stone elephants.

Bonuses: a 6:00 a.m. stroll through town as it comes alive with women sweeping stoops, then drawing intricate chalk mandalas at the doorsteps. A family at breakfast waves and the cleaning crew, blowing whistles, scoops up trash (“He who litters opens evil’s door” proclaims a sign). Cows reach into food vendors’ displays to munch. A goatherd drives his flock through the melee. On the road, we pass a cremation ceremony, then pull off at a squatters’ village of untouchables as they cook dinner over an open fire. Their neighbors, of a more elevated caste, cross the road—for the first time ever—to see why we’ve chosen to stop at the “lowly” part of town: a message that these folks are worthy people, too. 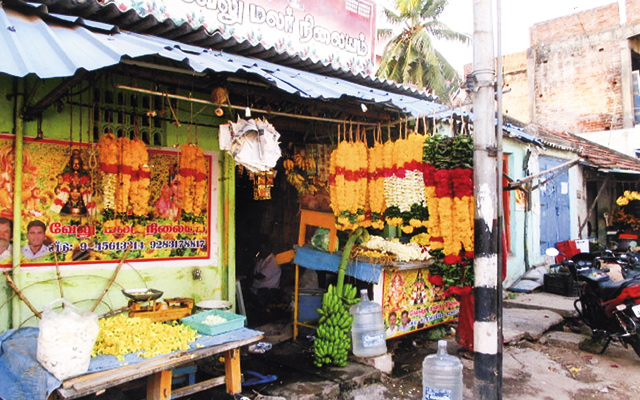 Oceanside Pondicherry, next up, served as headquarters for French colonists since 1673—thus, wide, flower-lined streets and police in pillbox hats to greet our visit to an ashram. But the native side of town is far more intriguing, as we discovered via a white-knuckle tuk-tuk ride, rampaging through narrow lanes where clots of teenage boys sprout grins and wildly wave. (Their too-cool-for-school American counterparts would studiously ignore strangers.) Bonus stops: a sprawling food market (saris, bangles, and handbags too) and an outdoor bar crammed with laborers swigging whiskey from the adjacent liquor store.

It’s here in Pondi the political disturbances set in. Following a popular official’s jail sentence for corruption, the pros and antis stage demonstrations, tossing rocks, overturning cars. Cafes, shops, and schools are shuttered, as well as trains and buses (and our route out of town).

Creative routing got us on our way to Tanjore, with the now-customary, “Driver, stop!” from Sudha when he spotted a village festival getting underway. We drop-in guests were greeted with necklaces of marigolds and eager hands pulling us into the raucous dance fuelled by horns and drums as the idol’s float was being readied for parading. Sure bet you’re not in Kansas, Dorothy!

In town, the starred attractions: the maharaja’s palace museum, lush with a world-class collection of bronze sculptures of Shiva dancing on the back of a demon. Then, the massive, granite temple with its looming stair-stepped roof, carved with an intricate story line and guarded by Shiva’s larger-than-lifesize bull. The bonuses, this time, involved kids—first a visit to an orphanage to play games with the brood, then, back at our hotel, a dance performance by two graceful 11-year-old lasses in lavish costume, who taught us the dozens of hand positions and eye moves that help tell the story. And, just because we passed by and cajoled Sudha, an evening at an Indian circus—elephant, camel, acrobats, fire eaters, jugglers, clowns—that was over the top under the big top. 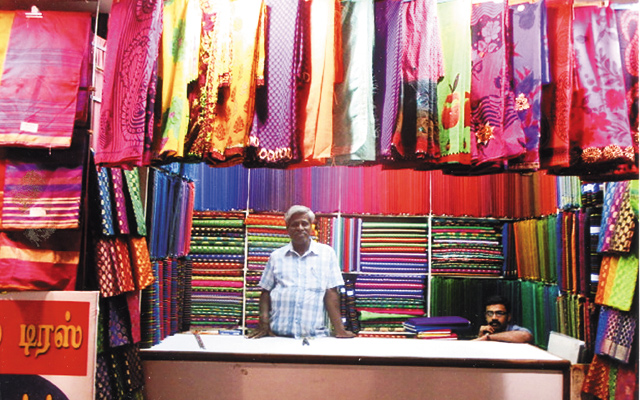 In Madurai we head for the palace’s sound and light show and the vast temple, encountering a procession of priests with drums, horns, and idols. Then the bazaar! It’s a grand melee of tchotchke sellers—bangles, incense, pashminas—and platoons of men pedaling sewing machines to produce silk shirts made to your measure in half a day. The Gandhi Museum displays the saintly man’s eyeglasses and sandals as it unfolds the story of the repressive British occupation he struggled against.

But, as usual, the bonuses proved even more enthralling. A stop at a mere path from the road led to a hidden Animistic shrine for a 400-year-old tree locals worshiped, reached through an avenue of near-lifesize clay horses donated by the pious. In town, a tuk-tuk ride—half amusement park, half kamizake—evoked more waves, more grins. Then a stop at an almond-milk stand to treat our drivers. A view of the river where women laundered and bathed. A rickshaw ride through more back alleys by outcaste peddlers Sudha purposely hired to help them gain status. Dinner in a dive where he bought vodka, Sprite, and limes and produced cocktails for our group.

This morning, a monkey is peering in my window. Soon his brothers are joining him, one clutching a bathing suit purloined from a neighboring porch. I grab a weapon—well, a rolled-up magazine—in order to clear the path to breakfast at our resort near a nature preserve. The adjoining town sprouts so much traffic—and for the first time, other tourists—that I’m glad to be on our way.

Soon we’re bumping along a dirt track to a tiny village—pop. 2,500 with five castes—where locals clamor to affix bindis on our foreheads and kids vie to guide us, eager to practice their English. (Me: “What’s that?” Girl: “Dog baby.”) 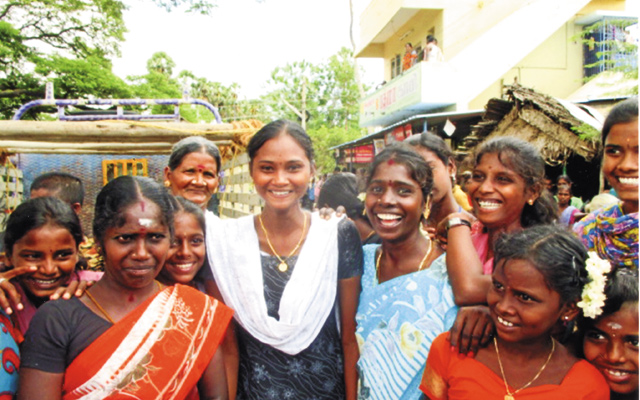 The terrain changes from flat, red clay to forested mountains, then fades to the balmy backwaters that circle Cochin—canals constructed by the Dutch who traded here in the 1600s, along with Portuguese, Arabs, Chinese, and Jews. Temples make way for churches, including one that once held the bones of explorer Vasco da Gama. Signs advertise Jesus Auto Works and Madonna General Store.

Cochin’s harbor is laced with mammoth nets employed, still today, by Chinese fishermen, who let us try our hand at roping their catch. We pop in on an open-air laundry as sweating workers labor over sheets and towels, spread on the sand to dry. In melting-pot Cochin, the Dutch Palace (designed for a maharaja to displays his treasures) stands next to a synagogue, erected in 1568 by Jews fleeing the Spanish Inquisition. It’s the center of Jew Town, where all but a handful fled in 1947, fearing trouble after the country’s tempestuous partition.

We take to the air to reach our final destination, Mysore, a mini-London by design: clock tower, “Trafalger Square,” palace a la Buckingham. That ornate maharajah’s palace, built in 1910, boasts 400 rooms, each more fancy than the last. We had lunch in another of his palaces, then bedded down in a third, now a hotel.

Perhaps the finest temple of all lies out of town: star-shaped, intricately carved outside with band after band of figures—elephants, wrestlers, sexual athletes, mythical birds, more, more, more—and inside, splendid Vishnu greets us. More bonus surprises: Sudha convinces a bullock cart to give us a quick ride, then leads us to a cottage where mulberry-munching silkworms spin their cocoons. We wander through Cochin’s teeming spice market, then—surprise again—board vintage Ambassador autos for our return.

Speaking of return? Can’t wait. India’s got me hooked.