In The Mix With Mx 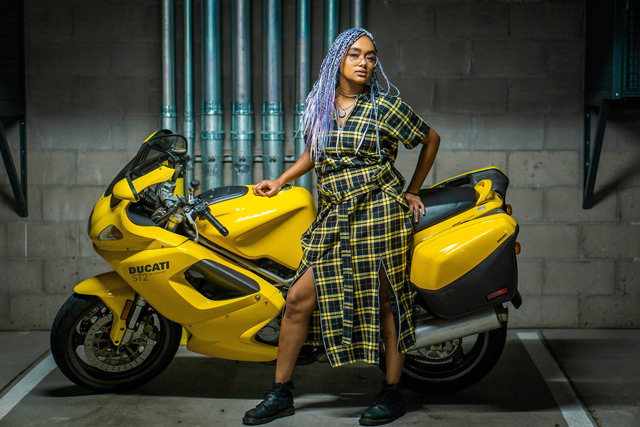 Want to give off an edgy vibe as a wedding guest? Try out this amazing yellow plaid skirt as modeled by Thar Jor’dan. Photo by Andrea Sawyer

Maxine Britt showcases her gender-neutral-friendly line of clothes that fits any situation, whether it’s on the runway or at a wedding.

“Whether we like it or not, everyone participates in fashion. We all get dressed each morning. And for transgender and non-binary people, getting dressed can be a particularly difficult and even dysphoric experience.” Maxine Britt, the creative force behind Mx Apparel, has made it part of her mission to make gender-neutral clothing that makes the kind of statement, and that exists outside of that ever-present and oh-so-imaginary gender binary with which Western culture has been stifling us.

Britt’s passion for clothing has been a part of her life for a long time. “I’ve had an interest in fashion since I was very young,” Britt explains, remembering sewing tiny outfits for her Barbie dolls and watching Project Runway growing up. Her relationship with clothing and fashion continued to develop as she got older: not only did she seek out learning opportunities, she also found that choosing the clothes that she wore each day filled a part of her that nothing else could.

“As a queer person going to school in a suburb of conservative Arizona, some days were challenging, and getting dressed in the morning was the only thing that consistently made me happy. That’s how I knew that I wanted to go into fashion.”

The label that Britt has since created, Mx Apparel, is barely over a year old, but you would not know that looking at Britt’s achievements so far. The first big break for Mx Apparel was its introduction at FWMN fashion show Local Coterie. 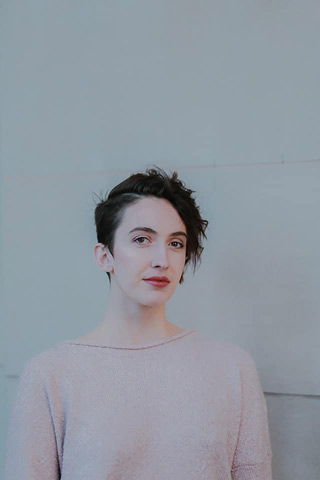 “[I]t was an incredibly rewarding experience to see my designs on a runway,” said Britt. Being a part of the show even led to the first ever Mx Apparel sale, which is a huge milestone in its own right. Since then, Britt was involved with the Planned Parenthood fashion show “Ready or Hot 2019”, was a finalist in the Fashion Scholarship Fund in New York, and had a pop-up show at a local boutique.

After getting involved in the Twin Cities GLBT community, Britt realized that she wanted to focus her brand on gender-neutral clothing.

“I see it as a way to fill a need for people who exist outside of binary gender,” she says. “It can be a huge challenge to create clothes to fit a wide range of bodies, but… that challenge isn’t unique to gender neutral apparel. [T]hat’s part of why I love making gender neutral pieces. It pushes me to be my most creative and sensitive to the needs of my unique target market.”

Once she decided what kind of clothing she wanted to make, her label’s name came naturally. On the one hand, Britt frequently shortens her first name (Maxine) to “Mx” in writing. On the other, “Mx” is a gender-neutral honorific. As Britt explains, the name “ended up being perfect for my brand—showcasing my community and me personally at the same time.”

Drawing from influences like Janelle Monáe and the popular comic Paper Girls, Britt has created a unique line of clothing that, while androgynous, still includes pieces like dresses and uses some stereotypically “feminine” colors.

“[N]ot all gender-neutral clothing has to be androgynous, [but] Mx Apparel definitely is!” Britt says. “My designs are typically bold, through use of color or shape, and edgy, with metal details.”

With Mx Apparel, you can feel like yourself and look damn good doing it in any situation. Photo by Josh Stokes, modeled by Shannon Lee

When I asked if any of her designs would work for wedding season, Britt lit up.

“Absolutely! I have a pair of pants, called the Double Cross pant, that create a folding, sculptural element on one hip. These pants are unconventional, but still easily dressed up. For an edgier event, I also make a long skirt in yellow plaid with two zippers down the thigh and a smaller folding accent at each hip, cinched in with a belt.”

With so much already accomplished, Britt continues to dream big. She will be releasing a new clothing collection in February, which is heavily inspired by the aforementioned Paper Girls. Look forward to more gender-neutral goodness, characterized with angular shapes and a twilight palette. Mx Apparel will also do another pop-up shortly the release of the collection. Long term, Mx Apparel will continue to create clothing meant to help fashionable GLBT folx, especially those who identify as non-binary, feel more comfortable in their own skin and their own clothes. And if, on her journey, Britt gets the opportunity to dress Janelle Monáe or Aaron Phillip, well, that would just be icing on the cake. For now, though, Britt is just happy to finish her last year at the U of M and and put the final touches on her latest collection.

Make sure you follow Mx Apparel (@mxappareldesign on Instagram, Twitter, or Facebook), so you will be the first to see all the forthcoming designs. If you want to order a (possibly customized) piece of Mx Apparel, you can do that through www.mxappareldesign.com.