Immigration Raid The Subject of “Clandestino” 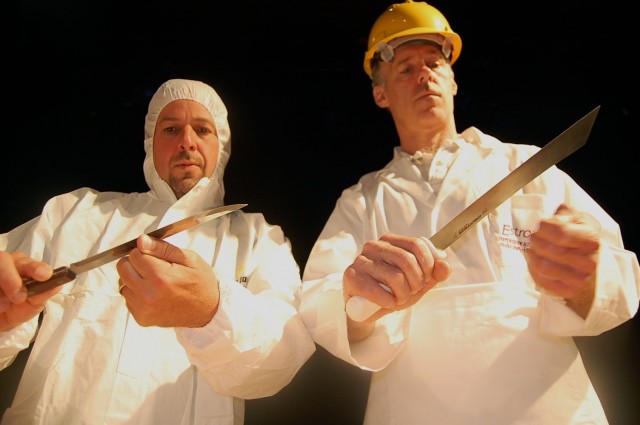 Those who opine against immigrants often fail to see the dependence the U.S. economy has upon so-called ‘illegals’. Moreover, political explanations, as important as they often are, can just as often minimize and edit away the full human aspect of a given political issue or problem. When federal agents raided a kosher slaughterhouse in Portsville, Iowa in 2008, simplistic explanations worthy of simplistic talk radio, didn’t fathom the ramifications of such an action. But the Wilhelm Bros. & Co. theater is making an effotrt to counter that with a new collaboration that looks into what was the largest immigration raid in American history by considering the lives of a Guatamalan ‘alien’, a rabbi, a Brazilian court-appointed interpreter, a British documentarian, a Hasidic woman, and an Iowan teacher of English language. Cory Hinkle and Victoria Stewart are the co-writers.

Director Jeremy Wilhelm shares “the main thing I’m learning about anti-immigration and the local economy is that it is like an unhealthy co-dependency. When things are going well, the relationship sits in a kind of uneasy peace, where the diversity needed for cheap labor is tolerated for the economic benefits. When the economy goes into recession, the true nature of the relationship is revealed. Blame crops up and all of a sudden immigrants are (perceived as) a burden on the system and are taking our jobs.”

Wilhelm amplifies “I’m also interested theatrically in the idea of diversity, and how maybe a ‘melting pot’ isn’t such a good thing; that a dynamic system of stark differences is more truthful and quite frankly, more interesting than ‘assimilation’. As a theater artist I like to argue: a play is an argument, a thesis put forth. I don’t mind a debate with an audience. That dynamic is vibrant as well.”

In describing how he is directing and designing this argument, Wilhelm has staged the co-depency aspect in an around the dinner table as metaphor. A series of tables serve as court room tables, tables for slaughtering animals, and tables for learning English. He sees the characters as dealing with what he calls “an impossible system. At the end of the day, no matter who we are or where we’ve come from, we all sit down to eat. How did we get that food so cheap? Are we able to eat together? Talk together? Or do we always need separate tables?”