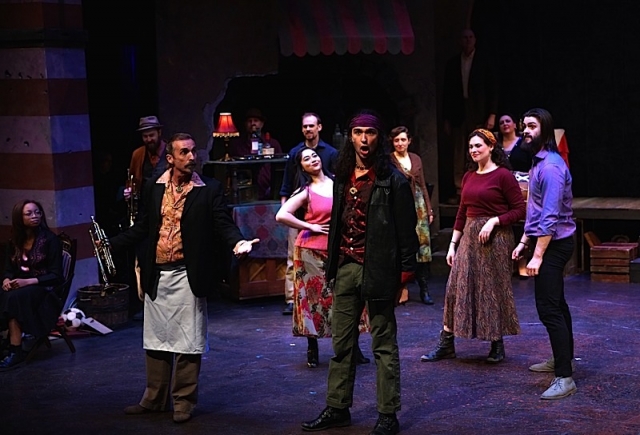 When societies collapse, it sends the inhabitants into chaos. It’s happening now in Venezuela and it happened 25 years ago in the former Yugoslavia. Both had been Marxist-based states and their unraveling happened swiftly. Around the same time, the Saddam Hussein dictatorship in Iraq, supported by democratic capitalist powers, also imploded spectacularly. 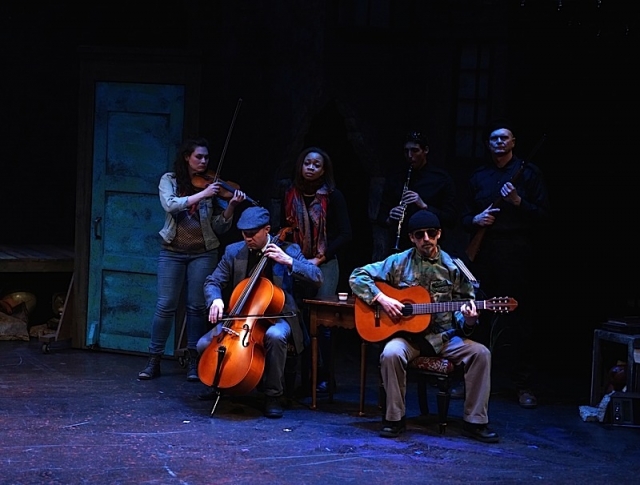 The revival of Joe Chvala and Chan Poling’s folk rock musical, Heaven, rumbles as a cautionary tale about the perils of social implosion in a powerful staging by Flying Foot Forum at Park Square Theatre. Lethally tribalistic identity politics take aim at Muslim communities with genocidal savagery. A gigantic irony surrounding the fall of the oppressive communist states in the early 1990s, as well as Hussein, was that they kept certain elements in check from going after those they saw as less human. In functioning democracies (which it must be noted, Iraq was not) constitutional values maintenance, to varying levels of effectiveness, the functioning of institutions therein. Under Hussein, the hard divisions between Sunni and Shia Muslims was contained.

In Yugoslavia during the Cold War there was Josip Broz, better known as ‘Tito’. He was largely thought of as Yugoslavia’s benevolent communist dictator until his death in 1980. He once said, “I am leader of one country that has two alphabets, three languages, four religions, five nationalities, six republics, surrounded by seven neighbors, a country in which live eight ethnic minorities.” 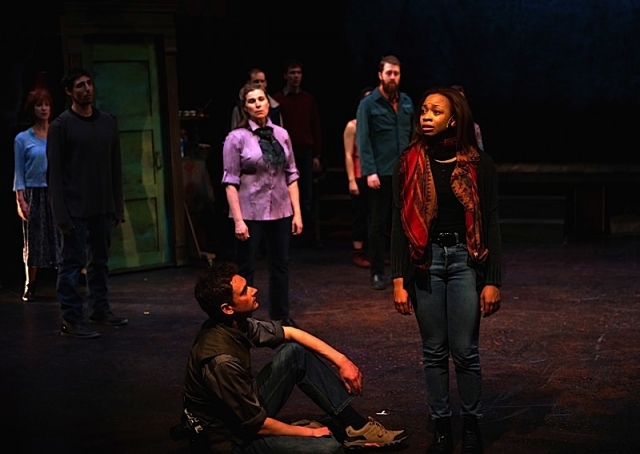 Heaven powerfully theatricalizes the destabilizing aftershocks of the breakdown of social order which broke into factions along lines that echo Tito’s observations, albeit with a grisly lack of benevolence. For all its sins, communism kept anarchy at bay. Although, communism in post-war Eastern Europe and other places was and is nonetheless, tyrannically and brutally illiberal in its own inevitable way; the distinction to be made was that it was authoritarian rather than anarchist. And to be sure, Heaven compellingly portrays anarchism, which always carries the seed of establishing a new tyrannical hierarchy. Anarchism tends to pave a potential path to dictatorship when its gangs, tribal warlords, ex-convicts and soldiers of fortune, et al. finally come together under some kind of tyrant-driven umbrella. The narco-state status that monstrously imprints itself now on various nations also shares a similar character. One hopes and prays that better angels will come to the rescue. 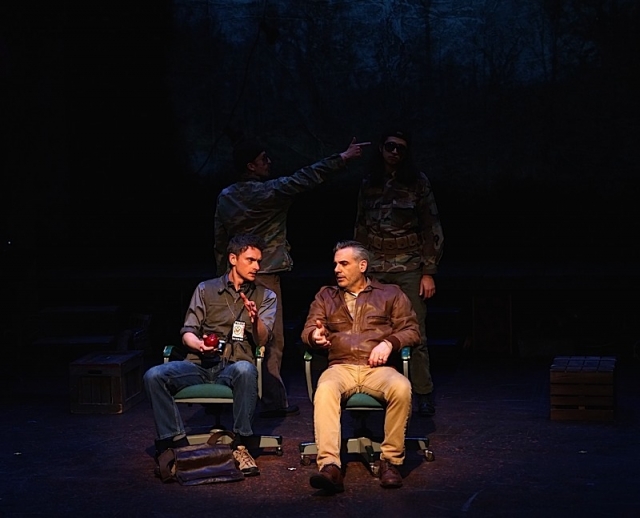 Director-choreographer Chvala, renowned for his Flying Foot Forum’s signature percussive dance, has revived the his co-creation with Poling that was seen as the Guthrie Theater’s Dowling Studio a decade ago. Since then, more Americans have wrapped their minds around how failed states beyond our borders and shores assign ramifications that are frankly, impossible to get away from. Steve Campbell’s unsettling video images reinforce that quite effectively.

A club known as Kafe Heaven, designed in gritty detail by Robin McIntyre, is the musical’s main location with lighting by Marcus Dilliard that moodily shifts us to various other settings. The spirit of the musical seems to pulsate with the dark consciousness emitted from the Srebrenica massacre of 1995 which signified the genocidal proportions of the Bosnian War. At that dreadful event over 8,000 men and boys were slaughtered. Dismemberment, rape, and castration were diabolically enacted upon many of them. Females of ranging ages were also raped, tortured, and sliced. It was the worst mass crime event in Europe since the Holocaust. United Nations Secretary General Kofi Annan a decade later acknowledged that the UN made serious mistakes in the name of “impartiality”. 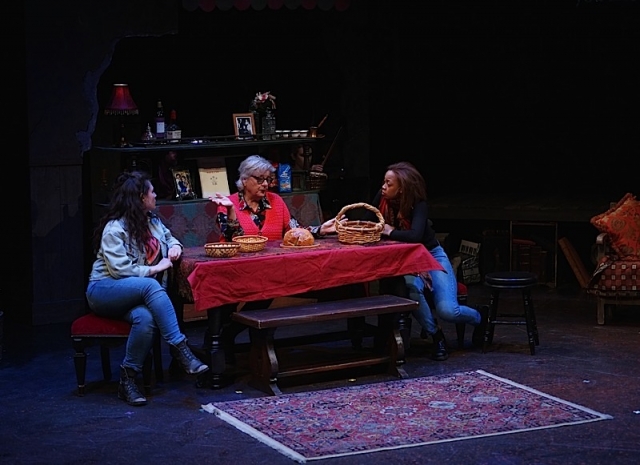 The Bosnian War lasted from 1992 to 1995. 12,000 to 20,000 rapes were committed on mostly Bosnian females and an estimated 3,000 rapes victimizing males. There were hundreds of detention centers. Arbitrary executions were chronic. Serbian and Yugoslav leader Slobodan Milosevic was ultimately put on trial at The Hague and died in the UN’s war crimes tribunal detention center.

Chvala and Poling are romantics at heart, which makes Heaven accessible to those who may not have thought much about geopolitics. Love stories thread throughout as Peter, Heaven’s American photojournalist protagonist, serves as the audience’s lens into the action on stage. He seeks news stories in the countryside where bands of soldier/thugs rove, rape, and execute at whim. Nicolas Sullivan is especially chilling as Darko, a thug who has traded his conscience for relishing his power over the helpless.

Peter’s guide is Faruk, a Muslim, whose religious identity makes him a marked man. Chvala and Poling have co-created a character tangibly reminiscent of Brechtian characters who live by their wits amidst the fog of war – Soldier Schweik, Mother Courage. Eric Webster manifests that with cagey brilliance. 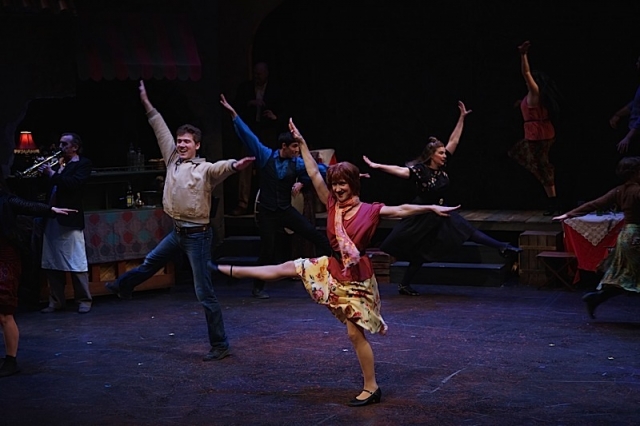 Lara Trujillo brings warmth and strength to Almira, Faruk’s wife. Jessica Staples is the very picture of integrity as Lejla, the woman who Peter falls in love with. Though she feels the same, she faces the existential void and a loyalty to her people and place.

Charles Robison gives a touching performance as a tender young man who fell in love with a New Yorker. Tragically, that potential lifeline has been cut as he no longer has the man’s address. To add agony to anguish, he could never tell anyone at all about the man out of fear of being killed for it. Failed state anarchy, narco-statism, and communism are not known for tolerance of homosexuality.

Poling’s score is soulfully overseen by music director Jake Endre’s vibrantly expert band. Though frequently festive, the music has empathic undercurrents of the forlorn spirit of loss felt from the traumas depicted. The voices in the production are terrific throughout. As usual Chvala’s percussive dance choreography bedazzles. Flying Foot Forum veterans Robison, Jan Campbell, Karla Grotting, and Jeremy Bensussan, also renowned for his exquisite work with Minnesota Dance Theatre, add to Heaven’s aesthetic richness. Their excellence in FFF craft has infused the rest of the performers with the Forum’s marvelous one-of-a-kind style. 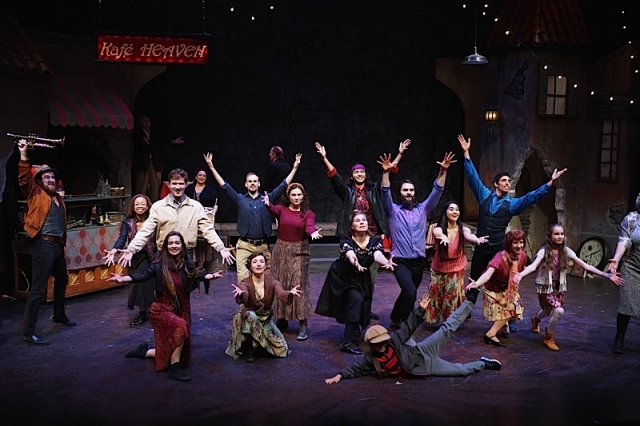 Note: Poling was a member of the famous music groups The Suburbs and The New Standards. He also composed what is sometimes called the Theme for the Same Sex Marriage movement – Love is the Law.