How to Do Orlando Without Kids or Disney 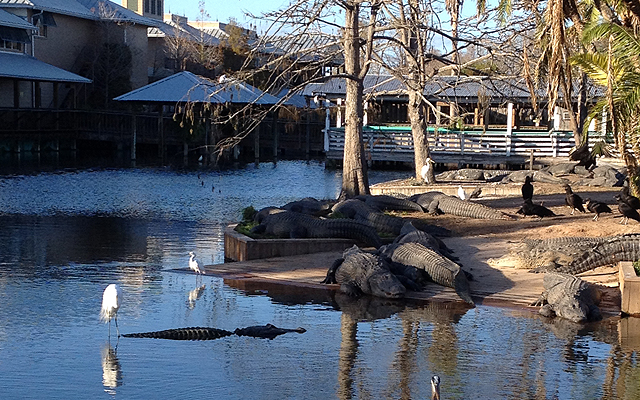 When thinking of how common experiences lend themselves to common desires, travel is no exception. For those of us who don’t have kids, respite often comes in childless packages. So, when I got the opportunity to travel to Orlando with some college friends, I got it into my head that I wanted to avoid kids and Disney, two of the most prominent features of that area of Florida. Nothing against kids or Disney, I like them both, but this was a challenge! An adventure! And I was up for it.

I rarely do the commercially tourist stuff, so when I looked at the attractions Orlando has to offer, the ones that are based on more adult themes were where I wanted to aim. I don’t know about you, but Florida leads me to envision Horatio Caine from CSI: Miami. While I can’t go find David Caruso whilst cavorting around Orlando, I can actually be him at CSI: The Experience. Suit up as either a vest-wearing detective or a white-coat wearing scientist and deconstruct the crime scenes at this attraction. There are three murders, three different crimes to solve, using multiple different high-tech tools as employed on the television show. While some of the clues and deductions were a little elementary, it was a learning experience and teamwork opportunity for both my friend and me. Beware, we’re talking autopsies and trashy back alleys, nothing for kids there.

Do you remember a time before shows about crime scene investigators? When things weren’t nearly as graphic as today? We couldn’t just turn on the television and see the gruesomely gory or the generally grotesque, we had to find it on our own. Which I did. I usually aimed for Ripley’s Believe It Or Not! for my doses of shock and awe. I’m guessing that there’s an age group out there for which the body anomalies and abnormalities might not be intriguing or interesting, but I’m definitely still in the walk-around-with-my-mouth-agape camp. The Odditorium in Orlando has your shrunken heads, your pierced people, and over 600 more exhibits and artifacts in 10,000 square feet. Something that particularly struck my fancy was one boot of a set of galoshes for cows. Not everything was grotesque, but everything was fascinating. 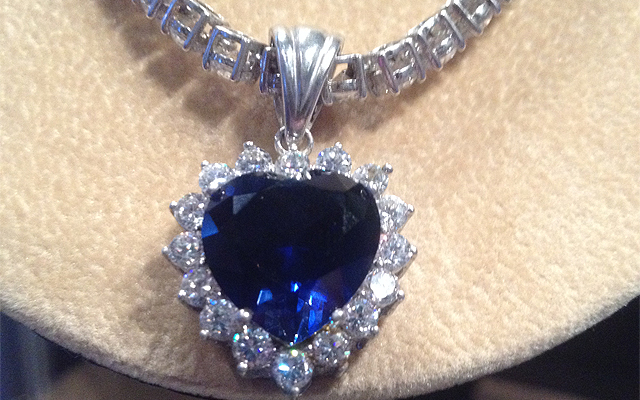 The Heart of the Ocean at TITANIC The Experience. Photo by Andy Lien

TITANIC The Experience is something for the movie fanatic and history buff, both. Guests are given a ticket to board the Titanic, each with a different name and identity of someone who was on that ill-fated voyage. We’re introduced to our tour guide, a member of the crew in costume, and taken through the unsinkable vessel that met a tragic end so many years ago. Artifacts from the R.M.S. Titanic are juxtaposed with specific noteworthy areas of the ship that were relevant to both the luxury experience and the failure of the vessel, such as the Promenade Deck. Of course, what floated my boat was being able to have my photograph taken on the Grand Staircase, where Rose descended to Jack, mixing fantasy with reality. Likewise, the gift shop has dishes and other items that border on props, depending on how you view them, but I chose not to split hairs. I wouldn’t turn down The Heart of the Ocean necklace, whether procured from a fictional safe in a movie or a gift shop in Florida.

Since all of these attractions are located on International Drive, we were able to scope them out as we drove. One that was particularly eye-catching was Wonderworks, since it was upside-down. Within are over 100 interactive exhibits that test things like dexterity, cognition, reflex, wind-resilience, and motion-sickness…it’s like a science museum meets an arcade. I dipped my hand in the water that was the same temperature as what the Titanic sank in, my friend tested out the Bed of Nails, and I landed the Space Shuttle Discovery. Additionally, there was a rope course, Lazer-Tag, and a 4D Theater in which we “rode” a haunted mine ride. We followed up our trip to Wonderworks with The Outta Control Magic Comedy Dinner Show starring Tony Brent. Voted to be “Orlando’s Funniest Dinner Show,” you can enjoy all-you-can-consume salad, pizza, beer, and wine with about 125 of your closest friends while being entertained by a mixture of amazing magic, impersonations, and high-energy improvisational comedy. We laughed. We enjoyed the people who shared our table and our food. We were entertained, to say the least in this casual, fun-filled setting. 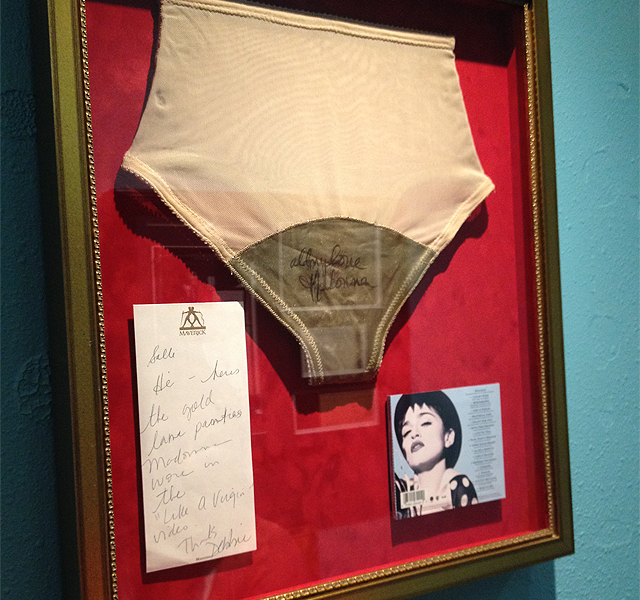 Costume piece from Madonna’s Like A Virgin music video. Photo by Andy Lien

In an effort to find a more nighttime activity that didn’t involve heavy drinking or too much neon, I booked us tickets at Sleuths Mystery Dinner Shows. Dinner and a show? Count us in. I won’t say that we were the youngest, but, actually, we might have been the youngest. Here’s the deal, though, people love showing the ropes to the youngest in the crowd and we were newbies to the whole mystery dinner show concept. At the “head” of our round table, an older gent told us the rules of the game. We’d eat a little, be introduced to the characters, eat a little more, see the drama unfold, eat some more, and have to come up with the “whodunnit” to solve the mystery…all before we finished our dessert. The drinks were bottomless, our shaman guide was resolute, the acting was funny, and my lasagna was delicious. The biggest rule of the night was to TRUST NO ONE. Except our guide. He’d been to so many of the shows before (and won a number of them) that each time he told us a new tale, his proverbial fish got bigger. And we ate it right up. 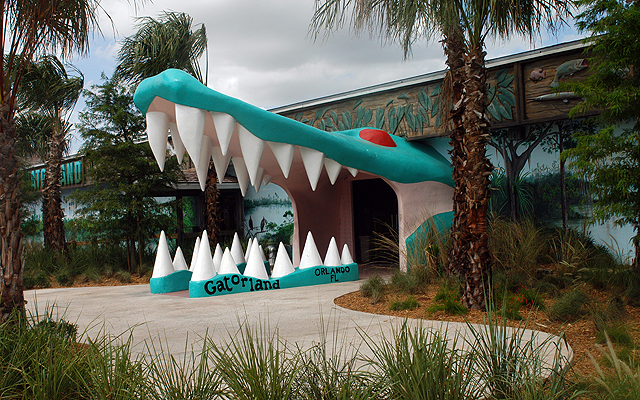 Want to get in on some ‘gator action? There are two great options for accessing alligators, one closer to the rest of Orlando than the other. Gatorland reminds me of Yogi Bear’s Jellystone Park. There’s a big, cartoony alligator mouth that forms the entrance and everything within has a hint of hokey. There are shows and photo ops for everyone, and plenty of gators for the viewing. There’s even the Screamin’ Gator Zip Line for those who are taller than 37” and dare to fly above Gatorland on a cable. It can get pretty packed and chaotic, but those facts shouldn’t keep you from going; everything is well-organized and there’s plenty of gators to go around. Kids are unavoidable, but not central to the attraction.

If you’re looking for an adventure that’s a bit farther out of town (there isn’t much of “civilization” in sight), make the drive out to Wild Florida Airboats & Wildlife Park. This was a highlight of my trip as I was bent on getting to ride an airboat like in that aforementioned show I can’t stop talking about.Wild Florida was less crowded and a bit more sophisticated; something that I appreciated, having traveled without children. There were spacious areas for different types of wildlife, including a large number of “rescue” gators…the ones that might have been flushed or been discovered to be problem guests in gated communities. I made friends with a touchy parrot and had the ride of my life on an airboat for nearly an hour. I kept thinking of how it was located on such a great lake for swimming (how Minnesotan can I get?) until I was repeatedly reminded of the alligators within. So, I may not want to bring a gator home with me, but I do want an airboat for up at my cabin. 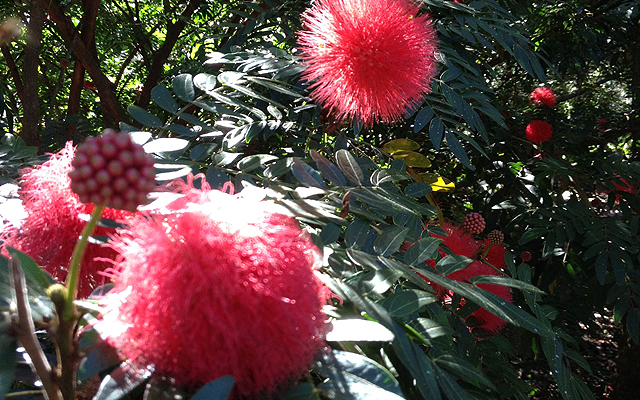 There’s something about garden tours and carillons that just doesn’t scream “CHILDREN.” Bok Tower Gardens is meandering garden in Lake Wales designed by famed landscape architect Frederick Law Olmsted, Jr. a couple of hours from Orlando, if you drive slowly. The founder of Bok Tower Gardens, Edward W. Bok, was a highly successful publisher, Pulitzer Prize-winning author, respected humanitarian, and an advocate of world peace and the environment. What he left for the rest of us to enjoy are almost 50 acres of a contemplative and informal woodland setting offering a series of romantic recesses and tranquil resting spots, picturesque vistas and breathtaking views, as well as a bird sanctuary, reflection pool, and the Singing Tower. The Singing Tower is a 205-foot neo-Gothic pink stone tower that houses a 60-bell carillon. Strolling the gardens during one of the two daily carillon concerts is a guaranteed afternoon of serenity.

On my life’s Bucket List is a hot-air balloon ride. Bob’s Balloon Rides did not disappoint. We woke up in the wee hours of the morning and rode out to the country with a bunch of other vans hauling trailers and tourists; like storm-chasers, the balloon pros know where to go. We assisted in launching our balloons and suddenly found ourselves up in the air with the only instruction being to listen when it was time to land and not touch anything we’re not supposed to. I followed directions and managed to not even throw my iPhone off the side, which is something that you’d expect would happen fairly frequently. We soared over swamps and marshes; the air turned a fragrant citrus scent when we were over an orange grove, and we landed without mishap in a pasture of cows. Our tour ended at a fruit stand at which we could buy some oranges to go, but our morning’s adventure ended with a champagne brunch back in town. It was full of incomparable sights and soaring, all with a knowledgeable and personable crew with Bob’s Balloon Rides. 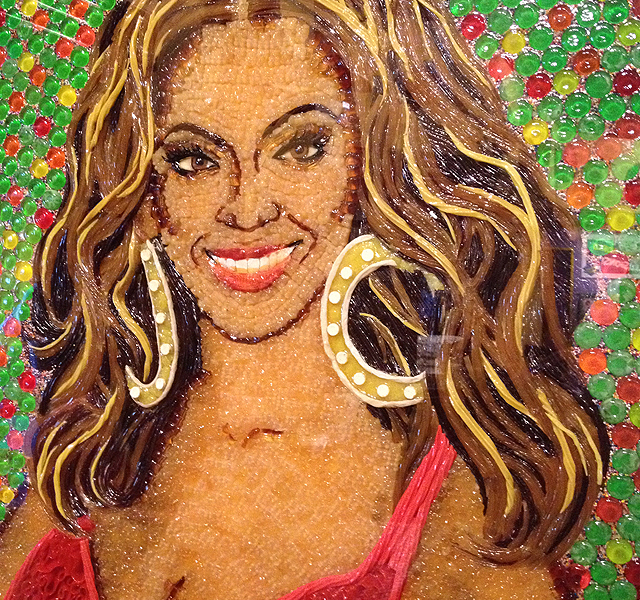 Beyonce artwork made of candy. Photo by Andy Lien

Unfortunately, we couldn’t ride around Orlando by airboat or hot air balloon all week, so I’d recommend renting a car. This was my first trip to Orlando and I kept trying to strategize using public transportation or taxis…but the economical and easy answer was a weekly rental. For what it would have cost for a taxi ride from the airport to our resort and back, we got a zippy little Chevy for three people for seven days. No brainer. The parking was easy, which I didn’t expect to be the case. If you’d like, you can ride a circulator trolley on International Drive called I-Ride, but when most of the attractions (listed in the Adult-Oriented Tourist Traps above) on this list have their own parking lots, it seems odd to take a trolley. Did I mention the part about a car being a little self-regulated civilization? Yes. With your own mode of transportation, nobody gets in without your consent and that includes people under the age of 36, in our case.

For more information about any of these attractions, go to www.visitorlando.com.