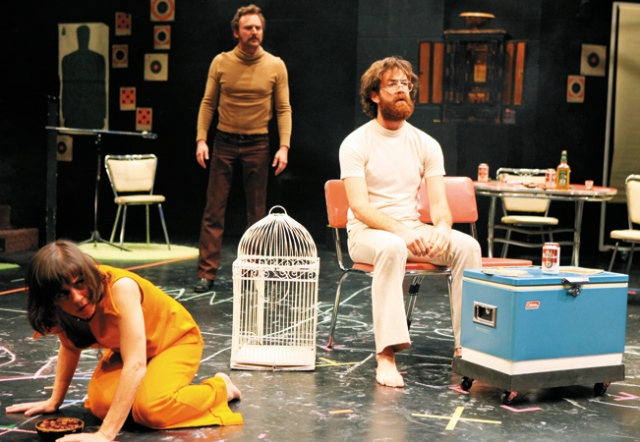 For 25 years, the Walker Art Center’s Out There performance series has reconfigured how local audiences perceive performing arts. It has consistently challenged mainstream notions of narrative performance.  Because it brings in various high-caliber American and non-American productions from well beyond the Twin Cities, it is a crucial counterpoint to so many of the very commercial out of town productions that do not challenge audiences.

But then the Walker ranks as the foremost contemporary art center in so-called Middle America and has long delivered cutting edge concepts and ideas to Minnesota that would otherwise not have been available. Thanks to the Walker, post-modernism is now a fully absorbed concept among Twin Cities arts patrons. Not to mention the Out There festivals, along with other Walker performance programming, have been exceedingly inclusive of queer fare for decades. If you appreciate that Minneapolis is a mecca for GLBT people, then you can extend that appreciation to the Walker for its enduring embrace of queer-oriented work. It’s always been a safe space.

Though the Walker Performing Arts Director John Killacky launched Out There a quarter century ago, he points out that his predecessor, Nigel Redden, had actually begun inclusion of boundary-breaking performers. Redden generated a post-modern demand. Killacky recounts that during his own tenure, “while brainstorming, we decided we wanted to present work that was really ‘out there.’ We searched and searched for a title, then realized that OUT THERE was perfect. Since performance artists were the emerging trends, we decided to invite two iconic figures that first season, David Cale and Rachel Rosenthal. If memory serves me right, David brought a work by his then-boyfriend and Rachel Rosenthal, with her fabulous shaved head, brought along her dead white rat. A late night showcase featuring local artists was emceed by Michael Sommers.” (Note: Much of Killacky’s Walker programming was aggressively queer and brought on the wrath of GOP Senator Jesse Helms.)

After Killacky left over a decade ago, Philip Bither filled his shoes admirably with his own distinct eye to radical alternative performance. When asked about the post-modern aspect he shares, “the works in recent years by the Out There Festival can clearly be situated in the realm of post-modernism–they often created their own reality, directly reject concepts of high art and low art, draw from a diverse range of styles and artistic disciplines within each work, can be read in numerous ways, are not based around the centrality of the written text, and often non-linear.” Hands-on workshops by the featured artists, artist talks, and social events are also part of the series. 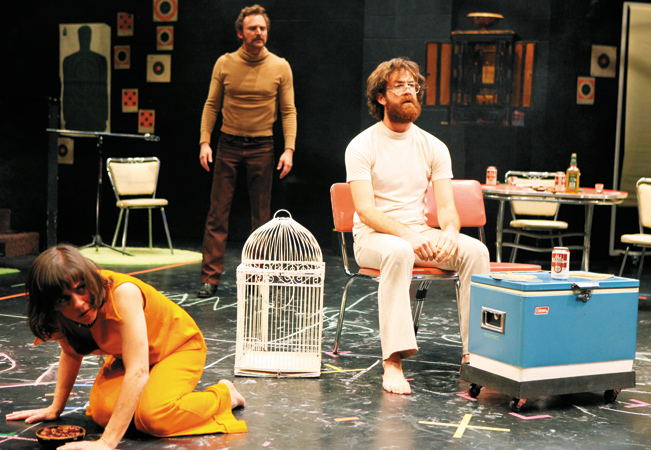 Two of this year’s 25th Anniversary selections actually turn the very notion of a text on its head. The Midwest debut of The Method Gun (January 10-12) by Texas-based Rude Mechs, is an irreverent spoof on an acting class in which the students do crying exercises and stage Tennessee Williams’s A Streetcar Named Desire without its four main characters.

Berlin’s She She Pop troupe re-invents Shakespeare with the actual fathers of the actresses. Titled Testament (January 17-19), collaborator Ilia Papatheodorou says “we wanted to use King Lear merely as a jumping-off point for a live controversial discussion with our fathers about questions of old age that nobody dares to ask. An unexpected and uncontrollable element comes from asking our fathers to share the stage with us. That is a personal risk for every performer that most people in the audience can relate to.”

The 25th Anniversary’s queerest and most erotic offering is the bedazzling (M)imosa/Twenty Looks or Paris Is Burning at the Judson Church (January 24-26), a kinetic, contortionist, genderbending collaboration by artists from Paris and New York with a beguiling array of music selections and lip-synching. Bither compares it to “a drag show from Mars–constantly surprising, outrageously surreal, funny, at times very moving, intentionally destabilizing. Like all of Trajal Harrell’s recent work, inspired by the dual influences of the underground voguing scene in Harlem of the ’60s and the post-modern dance revolution of the same period, it celebrates gender fluidity with fabulous, uproarious joy.”

Australia’s Back to Back Theatre ends the 25th series with a fascinating exploration of how images get appropriated and grotesquely exploited. Ganesh Versus the Third Reich (January 31-February 2) has an elephant-headed god going to Nazi Germany to return the symbol of the swastika to its Hindu origins. The ensemble has featured actors with disabilities and the production has been praised for its surrealism, poignancy, and courage. 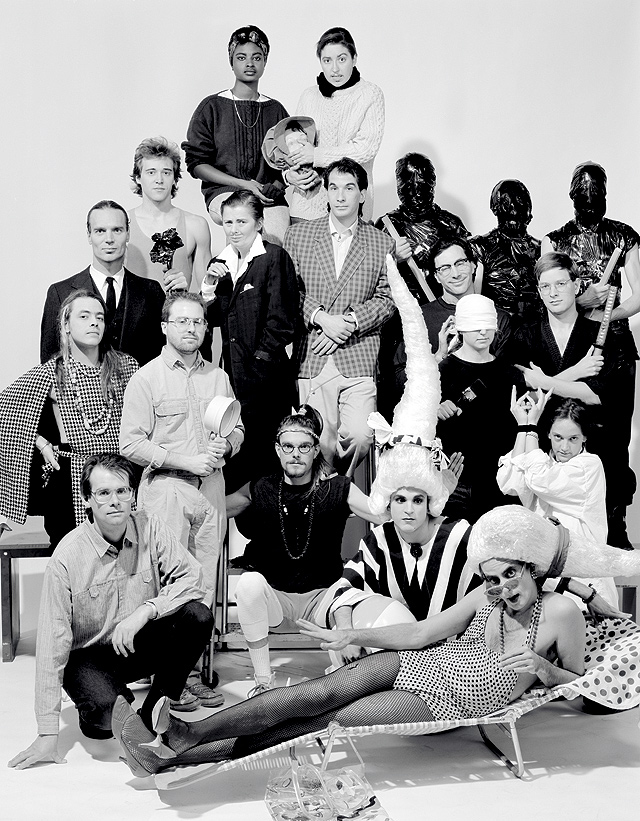 Out There group shot from 1990. Photo by Doro Tuch, courtesy of the Walker Art Center