How Swede It Is 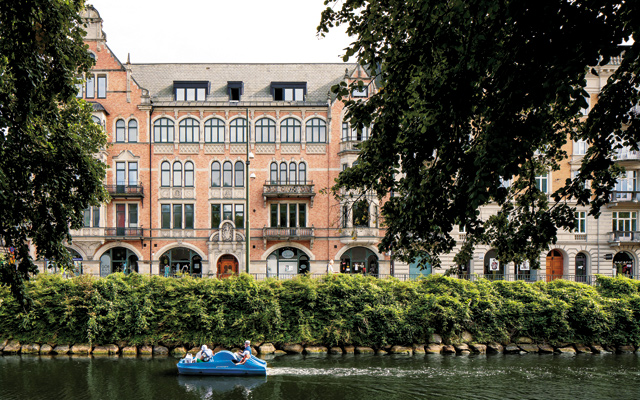 For centuries Danes ruled Sweden with a hard hand. Indeed, Copenhagen’s airport still serves as the arrival point for Western Sweden. But today, a new bridge then speeds visitors straight to the region, called Skane, where, jet lagged and weary, serenity awaited at Angavellen Farm, a countryside hotel-cum-restaurant creating a new future for Swedish food production by returning to pre-agribusiness days. Owner Rolf Axel Nordstrom, a city boy destined to join the family business, instead parted ways to follow his passion for animals, raised humanely, and organic foodstuffs. He bought the farm in 1971, explaining, “I’ve always been keen on what I eat: It must be raised with care, the old-style way. And it must be delicious.”

Victory laps: The farm’s restaurant, called “a living Utopia” by Gourmet Magazine and awarded Sweden’s Best Restaurants diploma, delighted us with dinner produced entirely on the grounds, from citrus cod with asparagus to smoked pork with beets and carrot puree. Sweet dreams are obligatory after dual desserts of strawberries with meringues and rhubarb shortcake. And for breakfast, organic fruit and eggs, cheese, sausages, ham, pate and loaves fresh from the oven.  Guest rooms in modern Swedish mode anchor multitudes of forest paths, a pond, and pastures strewn with pigs and sheep. Only the lure of exploring nearby Malmo prevented us from demanding residency forever.

In the Sixties, Malmo was the Detroit of Sweden, rampant with dirt, crime, and unemployment after its shipping and herring industries collapsed. Today, thanks in part to that new bridge, it’s a vanguard of all things eco: green parks and sustainability. And, the new capitol of cool, with a young, creative, multi-culti population. The unstoppably trendy West Harbor boasts architect Frank Gehry’s Turning Torso tower. Contemporary art beckons provocatively from the Moderna Museet, hosting an exhibit of Munch’s works labeled (in red neon) “Scandinavian Pain.” The city’s Form & Design Center boasts the best of Sweden’s designers: contempo furniture, toys too stylish to save for kids, quirky crocheted earrings. 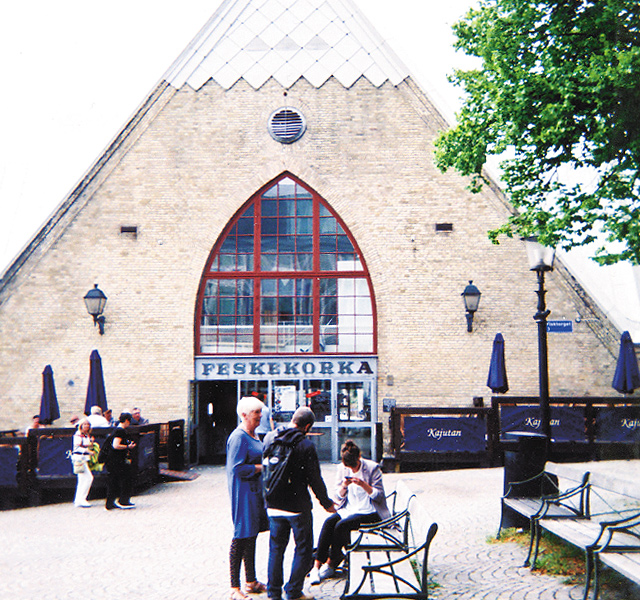 Malmo’s main square, complete with obligatory statue topped with obligatory pigeon, displays an architectural mélange segueing from sturdy Gothic brick to the soft pastels of Art Nouveau. The city’s moated castle now hosts a complex of museums, bordered by an organic garden serving its outdoor café, where we gobbled mountains of shrimp. A boat tour in this canal-laced town passes under 22 bridges and aside a mammoth parking lot for bikes, the eco travel mode favored here.

Helsingborg beckoned next. First thing I see is, OMG, Hamlet’s Castle, Elsinore, anchoring the Danish coast across the water. Second is the sweeping boardwalk extending miles from city center, where swimmers brave the chilly waters as I promenade. (I’m wearing long johns.) Reaching into the harbor, a glassy restaurant called Sillen & Makrillen (salmon & mackerel) honors its pledge of seafood supreme.

This is another town on the move, with a brand-new Culture House, home to art displays, concerts, a music school, and a way-too-alluring gift shop. Climb to the town’s 1865 castle for a view that’s worth the aching knees, then prowl the streets below it, lined with half-timbered buildings from 400 years ago.

We follow the coastline to Sofiero, King Oscar and Queen Sofia’s 1865 summer castle on the sea, surrounded by formal gardens and wild, woodland paths. Then it’s into the countryside with a stop at the farmers’ market hosted by Viken Tomater, which raises 83 varieties (who knew?) of tomatoes to try before you buy. We break for lunch at Hoganas, once a pottery factory, where today a buffet is spread atop the former kilns: unending salads, breads, and, my choice, Swedish meatballs, followed by lacy Swedish pancakes topped with whipped cream and lingonberry sauce. 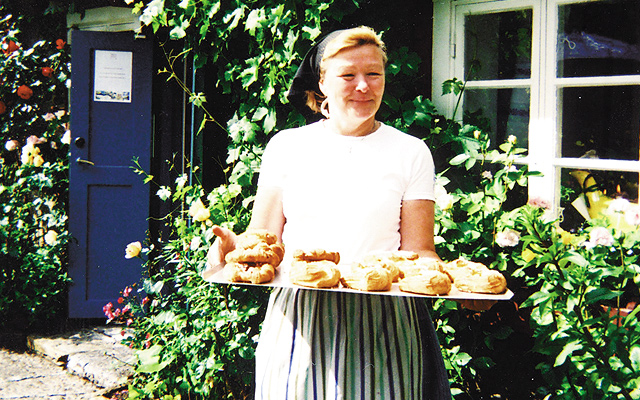 Braving the punishing wind, we stop at Kullaberg Nature Reserve at the entrance to the Baltic Sea, inviting folks to hike, bike, kayak, dive, and porpoise-watch, with 20 watery caves to explore. The cure for shivering is a Fika—a Swedish pastry break—and the sweethearts who run Flickorna Lundgren prove no slouches at the oven. Choose the vanilla hearts beloved by King Oscar, who ate ten at one go (my kind of man); chocolate hazelnut macaroons, the almond-vanilla cream Toscas. The entire café, inside and out, is filled with blue-eyed blonds of three generations, a demographic snapshot of the land.

The spa hotel Skansen in Bostad, refuge of the glitterati (Robert Kennedy fell in love here—albeit not with his wife; Richard Gere went skinny-dipping; Ingmar Bergman filmed its terrain) delivered dinner that day—a mountain of tiny shrimp followed by fillet of char, then raspberry sorbet, which we walked off on an endless seaside path. In the morning, as waves roughed up the shore, we stopped in the weaving studio launched by designer deluxe Marte Maas Fjetterstrom, whose carpets grace Manhattan’s U.N. Building and floors of the rich and famous. Then, it’s off to the farm of a local singer who, indeed, became rich and famous by defying her daddy’s edict to get a real job—opera diva Birgit Nilsson. The stable, now a café, draws on her own recipes for Aida tart and Diva cake. The humble house, where her needlepoint sampler hangs over her tiny bed, is joined by a museum that unfolds her life story via displays and arias: “Wagner made me famous, but Puccini made me rich.”

In the depths of a nearby forest, Stollaby Krog, a schoolhouse-turned-restaurant, all gleaming white, serves 30 for dinner, and opens at lunch “only for you and the Crown Princess of Sweden,” joked the owner. From a forward, be-foamed menu, you’ll discover dishes like cod cheek with celery root and beets; fish with nettles and seaweed; goat cheese cheesecake with rhubarb mousse. Or simply, flank steak with those perfect Swedish potatoes.

Best for last? Hard to say, for each day offered its own share of serendipities. We hop a train to Gothenburg, under the skies of blue and yellow sun, colors of the Swedish flag.  Lush with green parks border meandering canals, where a boat tour requires passengers to squat for a low bridge, “or the cheese slicer will give you a Swedish haircut.”) It passes Seluhallen Food Market bursting with 40 shops, and another venue expressly for seafood, nicknamed the Fish Church. (“You can even get married here, provided you believe in Cod.”) We glide by the chic new Opera House and muscular dry dock, readying ships to return to sea—past the old-time hospital built round, “so germs couldn’t lurk in the corners,” and a floating parking ramp. 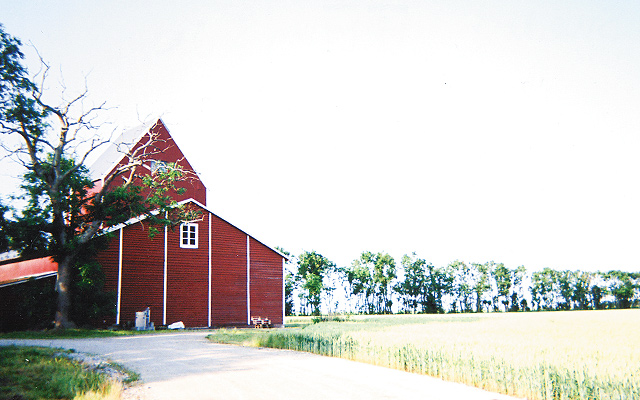 Swedish country side near Malmö. Photos by Carla Waldemar

Avenyn, the city’s see-and-be-seen street, leads from the harbor to a concentration of its cultural musts: the Concert Hall, Rohsska Museum of Fashion & Design, and the Art Museum with its treasury of Nordic artists, aside the Hasselblad Center for Photographic Arts.

Gothenberg was chosen Sweden’s Food Capitol in 2012. And guess who helped put it on the map? Marcus Samuelsson, chef of our own dearly departed Aquavit. He recently opened his first restaurant in Sweden, here in his home town. It anchors the Clarion Post Hotel, grand as the former post office it once was, where we drooled over his Manhattan Meets Skane menu of shrimp salad supreme, with hard-cooked egg and caviar. Or grab the cod Caesar or the surf ’n’ turf of suckling pig and scallops. (He’s also opened another café in Helsingborg’s Clarion Hotel.)

Haga is the sweetheart of the city. The district originally held the working stiffs kicked out from the center when they couldn’t afford brick houses, decreed to prevent fires. So they built humble wooden structures along cobbled streets that today house a shopper’s mecca, featuring everything from iconic clogs to the town’s best—and unquestionably largest—cinnamon bun. To collect your own stash, visit www.gothenburg.com, www.gothenburg.gaycities/en; www.malmocity.se , www.malmotown.com/en and www.visitskane.com.