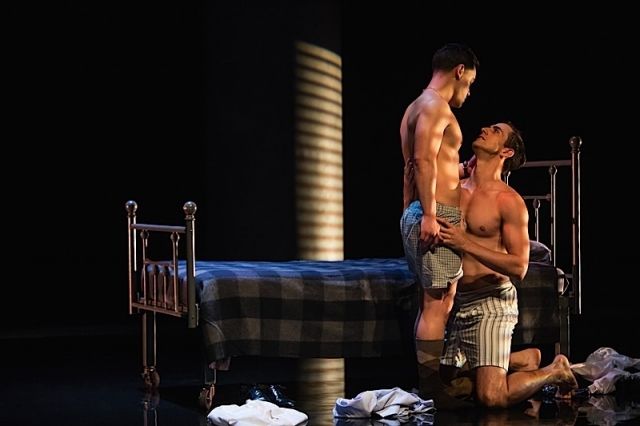 Minnesota Opera transports us to the mid-20th century on the Cowles Center stage. Gregory Spears’s Fellow Travelers is an opera that uncannily and viscerally captures the Lavender Scare of the 1950s, when over 5,000 federal employees suspected of male homosexuality and lesbianism were removed with harsh prejudice from the U.S. government. Democrat President Harry Truman and Republican President Dwight Eisenhower were both complicit with firings, career destruction, and facilitation of a paranoid climate that also led to suicides.

The Lavender Scare ran parallel with the Red Scare in which alleged Communists were hauled up before the House Un-American Activities Committee chaired by Joseph McCarthy (R-WI). A justification for the injustice was that homosexuals, assumed automatically to be deviants and mentally ill at this historical juncture, were candidates for blackmail. This deemed them as high risk when it came to government secrets. 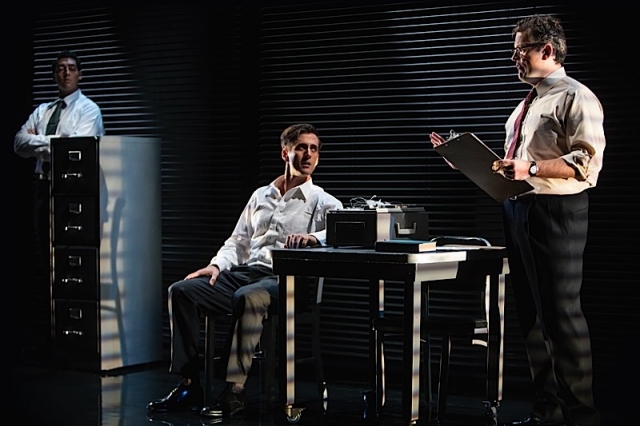 The opera’s anchoring core strength, or “energy source”, if you will, is Greg Pierce’s libretto from the Thomas Mallon novel. It zeroes in on the utterly institutionalized paranoia of the day, particularly in Washington, D.C. He makes it acutely clear that within government agencies and offices, employees actually found deranged purpose in exposing gays, lesbians, and bisexuals, or straight people whose name could be smeared as queer on false pretenses. Stigma ruled the roost. The press fed into that, and because the Sexual Revolution had yet to expand, the acceptability range of what could be discussed and what could not. Pierce’s genius lies in this apprehension—the destructive potential of silence. Even though Alfred Kinsey was in full throttle at the time, his findings were decidedly heretical.* 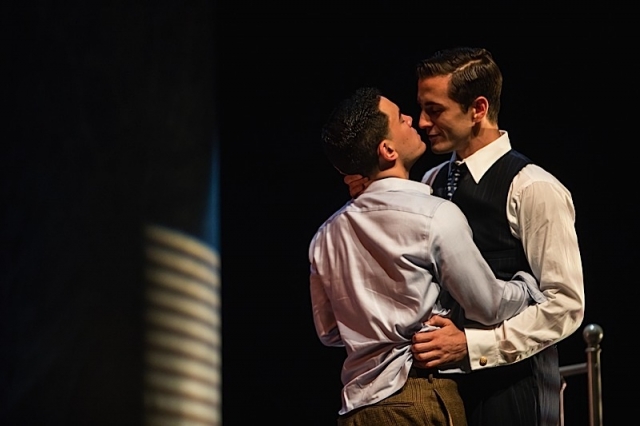 It has a magnetic way of reflecting how the psyche and emotions are fragmented under mass hysteria. It reminds one of the chilling insights of Jewish philosopher Hannah Arendt (Eichmann in Jerusalem: A Report on the Banality of Evil). She peered into totalitarianism’s dreadful inexorability toward propelling a society into frenzied chaos.

Peter Rothstein has directed Fellow Travelers with incisive sensitivity to how a charged sociopolitical atmosphere distorts and convulses human interaction. Andres Acosta, as beta male Timothy Laughlin, offers perhaps the most endearing performance of a gay character you’ll ever see. Timothy, a devout Catholic, adheres to embedded conservative values that are upended when he succumbs to the passionate and movie-star-handsome Hawkins Fuller. Acosta numinously portrays a monumental personal struggle between loving homosexual yearnings and religious formidability.

Alpha male Hawkins is older, closeted, and has learned to game a system that destroys gay and bisexual men as a matter of policy. Or so he thinks. Compulsively and impulsively sexual, his non-monogamous pattern is jolted when he meets the infinitely lovable Timothy. Hawkins’s radically secular view, shrewdly conveyed by Pierce, is portrayed with mischievous Apollonian splendor by Hadleigh Adams. Where Acosta is numinous, Adams is luminous. Adams is remarkable in how he brings deep humanity to what some will regard as an unlikable character. That said, we see Hawkins, for all his flaws, helplessly at the effect of centralized machinations innately degrading to human dignity. He is driven to choices that any reasonable audience member must confess are overwhelming. Would we do the same if confronted similarly? 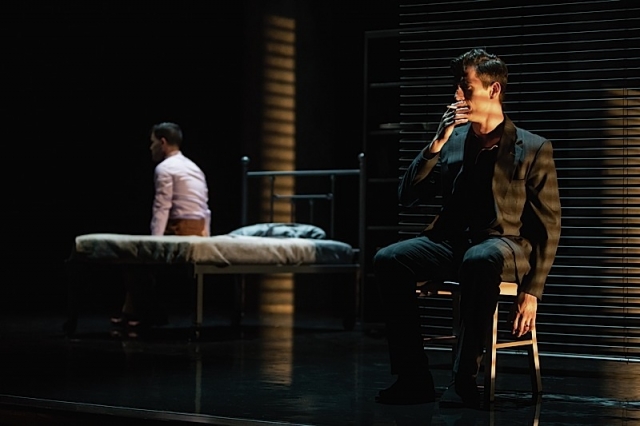 Moreover, Fellow Travelers is an opera that may appear on the surface to be a gay lib screed. But it’s definitely not. Catholicism may have some hauntingly oppressive qualities but Hawkins’s ironic pull toward obeisance to the state is actually worse. At least God has the capacity to forgive and in the eyes of many of the faithful, He can be called upon personally or through a benevolent confessional cleric. However, man-made statism, in this context especially, does not forgive. 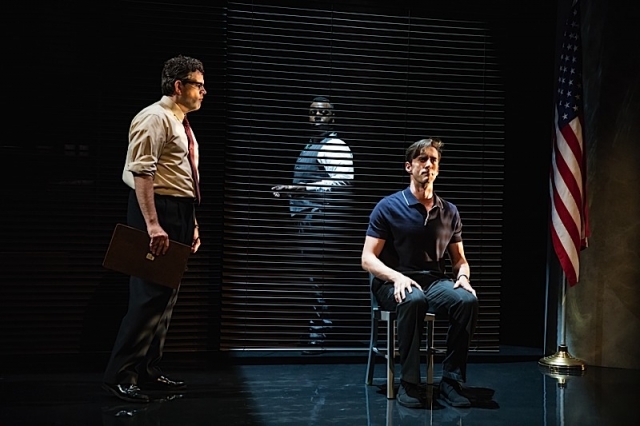 Fellow Travelers has added integrity because it includes an organic reminder of even worse homophobia engulfing communist eastern Europe at the same time in the name of anti-capitalism. Recall that only a decade earlier, gays continued to be herded into concentration camps, additional scapegoats of Nazism’s antisemitic Reign of Terror. Moreover, virtually all cultures and religions, East and West, were then intrinsically anti-homosexual. (Of course, many still are.) There was a planetary gravitational pull toward homophobia. And perhaps there still is. 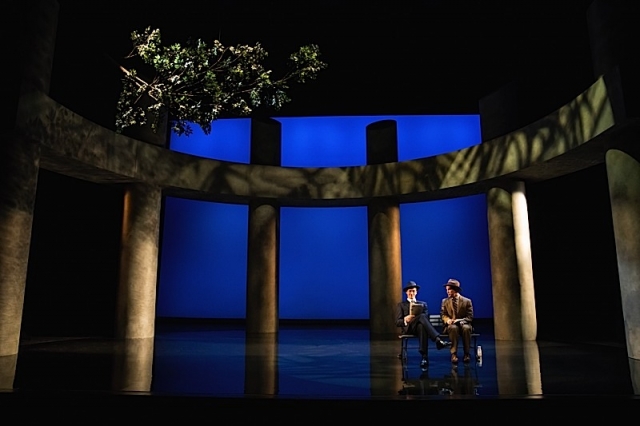 Rothstein’s staging is beautifully served by an ensemble of uniformly marvelous vocalists who embody the ’50s sense of propriety in their movement and crisp interplay. Conductor Daniela Candillari masterfully channels the musicians into the turbulent eye of Fellow Travelers’s McCarthyistic storm. Not to be missed!

*Alfred Kinsey is certainly a figure to be reckoned with, but in the decades since, some of his findings and methods have been seriously called into question.