Homophobia, Internalized and Externalized, in Area Premiere of “The Whale” 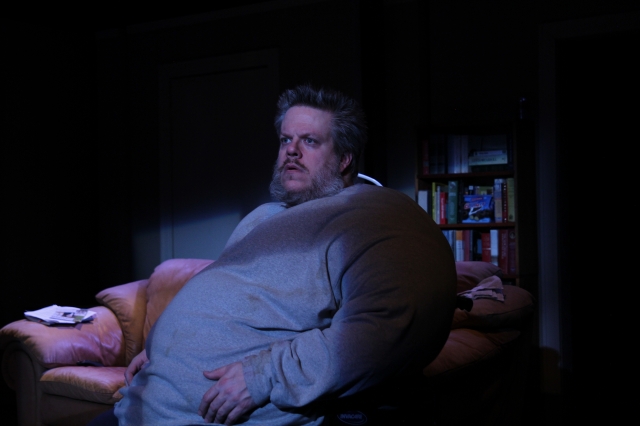 Charlie (Zach Curtis) looks out his window Photo by Walking Shadow Theatre Company
In Samuel D. Hunter’s drama, The Whale, a 500-plus pound man, sits on a sofa in his Idaho home for most of the play from beginning to end. Charlie has lost almost any will whatsoever to carry on with his life. It’s an arduous event for him to simply reach the bathroom just steps away from the couch. Walking Shadow Theatre Company has produced the area premiere at Mixed Blood directed by Amy Rummenie.The idea that emotional traumas can lead to obesity is something that natural healers have talked about for years but there are few plays, if any, that I recall, which have ever manifested that idea in dramatic form. Therefore, Hunter has broken new ground. Moreover, whatever your own weight situation may be, this is a play that clearly comments on anyone who has ever gotten “stuck in the past”.

Charlie’s Idaho, hardly a bastion of liberalism, is no place to get over the rejection of a young Mormon man he loved years earlier. He has internalized his self-hatred for being gay in a homophobic parochial place so deeply that his own body has turned on itself. This is not a town where you find a critical mass of sympathetic citizens to listen to the anguish of a gay man devastated by the loss of a love, much less the guilt of not being the parent he might have been.

The Mormon element is thoughtfully interwoven into the present day play with a Latter Day missionary called an elder, apparently on the mission trip that Mormon youth are tasked to do. The young man appears on Charlie’s doorstep one day as if sent by Fate to clear up some of Charlie’s misconceptions. This is the opposite of the reckless irreverence of the musical, The Book of Mormon.

However, The Whale‘s conflict crackles in the interchanges between Charlie (Zach Curtis) and his 17-year-old daughter, Ellie (Katie Adducci), a foul-mouthed bully whom he has not seen in 15 years. She has an ax to grind about her father and prepare to hear some very brutally vicious comments made about gays and male contact. Ellie has been dreadfully abusive to others over the years and doesn’t care at all about her future. She habitually lashes out and against everyone around her. An equal opportunity destroyer. Charlie is so delusional and guilt-ridden about not being there for his daughter’s upbringing, that he rationalizes her ugly comments and record of real abuse as “honesty”. 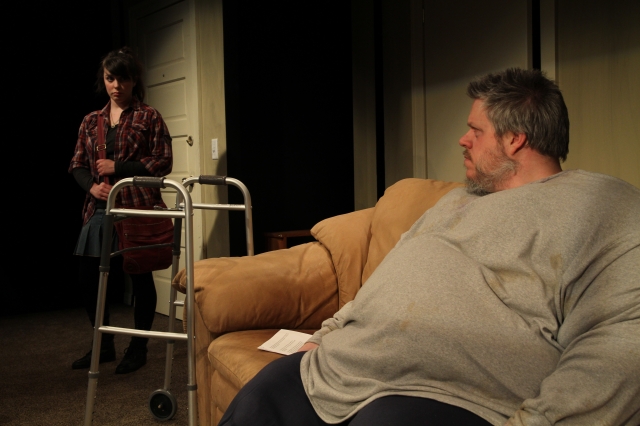 Curtis’s moving performance gives us a man emotionally wounded to the point of inertia. Depression and obesity go hand in hand. Amy Hill’s ultra-King-size costume effectively conveys that without tipping into mockery.

Katie Adducci is gutsy in the very unlikable role of Ellie. It’s an unsettling performance, a cautionary tale within itself about today’s emotionally abandoned youth. It also puts forth the notion that maybe we need to re-think how we sometimes let rotten behavior off the hook in the name of rights and honesty. Hunter is indeed a liberal, but he raises some soul-searching questions for liberals.

It also puts forth the notion through the missionary, played endearingly by Zach Garcia, that rather than rudely shut out those we suspect we will disagree with on big topics, that it can be to our benefit to open up communication. It’s the Achilles’s heel of many liberals to shut off dialogue with those they disagree with or to do battle with bullet points rather than really make an effort to connect. In this sense Charlie is an exemplar of good communication and a good proponent of progressive and compassionate values.

In Jennifer Maren’s winning performance as Charlie’s nurse, Liz, there is a striking sense of loyalty, undying affection, and tenacity. We intuit that she loved him deeply before his transformation and has never had the heart to abandon him. Julie Ann Nevill is terrific in a whirlwind of a scene where Charlie and his ex-wife, Mary, encapsulate years of misunderstanding, anger, and regret. It’s a sign of the actors’ and Hunter’s skill that one finds it difficult to side against her. 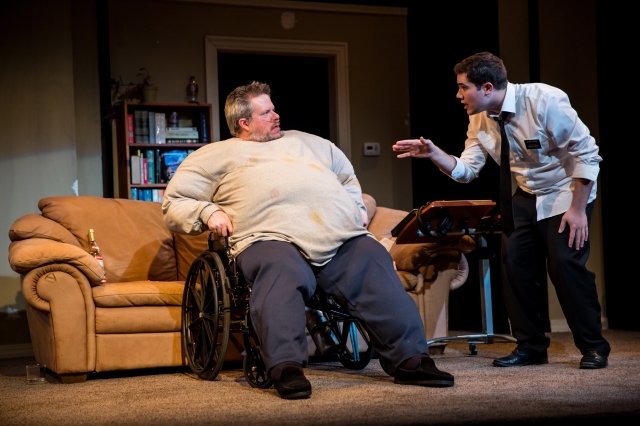 In mulling over this scene afterwards I had to think about the tragic lack of options that small town Americans have access to, even now, when it comes to understanding gayness and homosexuality. And that includes lack of support for straights and undefined people who want to be tolerant. In larger metropolitan areas we have access, actually lots of it, if we choose to look. Some college towns have wide access while others do not. In towns and smaller cities, especially those dominated by conservative religion, the collective attitudes can be not only demoralizing but death-dealing. I think The Whale implicitly understands that. (If you are a metropolitan GLBT person, take time to count your blessings sometime. You have lots of them.)

This makes two recent plays I’ve seen this year (Hunter’s The Whale and Joe Waechter’s Lake Untersee) that actually show the devastation of divorce on children. Neither are right-wing in the least or lacking in empathy about why adults with kids divorce. It seems that there is a need by the younger generation to inquire into this.