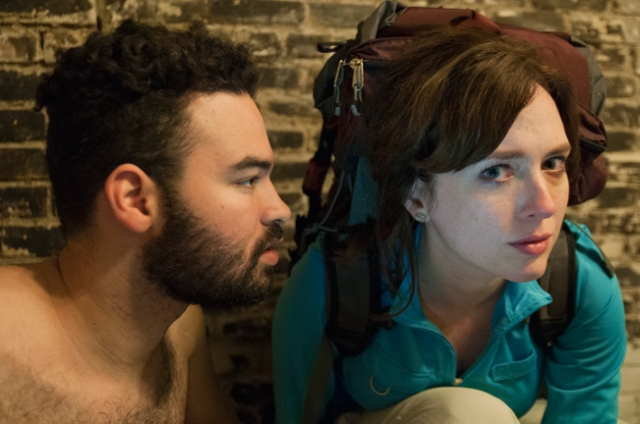 Michael Ooms and Blake E. Bolan play a midwestern couple rooted in their home despite the drought and death going on around them. These two actors are strikingly visceral embodiments of rural folks of the time. Decades later, young Clara (Emily Dussault) protests the corporate razing of her childhood home with the moral support of her college friend, Jack (Neal Beckman). Jack is more interested in Clara than her cause and these actors ably elicit the tension that disconnect creates.

Both men in both periods are tugged by homoerotic and homoromantic feelings personified by a spirit figure androgynously and magically played by Mason Mahoney. When he enters the scenes with the men, apparently being a figure in their memories and imaginations, the effect in ineffable. A vibrant Bryan Grosso play a government figure who adds a serendipitous twist.

Regrettably, the night I saw Rain Follows the Plow, which ends with an utterly beautiful stage image, the curtain call was immediately followed by a plea for money for Savage Umbrella. A total illusion-wrecker and buzz-kill to put it nicely. It’s also an unreasonable thing to request an actor to do.

If a theater feels it must make such an appeal, it should be done either before the show by someone not in the cast or in the lobby before the show or at intermission or by poised volunteers who might pass out appeals in paper form before the show or at intermission. If you want to know who gets it right, they are Theatre in the Round Players’ board which always has a board member make a curtain appeal before the show and Wendy Knox, Frank Theatre’s Artisitic Director, who does the same and gives a little background on Frank itself. And it’s fine to tell the audience that word of mouth is important. But before I state the following, let me say this has nothing to do with TRP or Knox, or even Savage Umbrella, but with other groups I’ve seen: don’t say something like ‘if you didn’t like the show then tell your enemies it was great’ or some other foolishness. What a mood-wrecker. You take the audience out of the moment and in so doing you debilitate the potential for the word of mouth you’ve just begged for!