Camelot
Lerner & Loewe’s majestic musical about King Arthur and the Knights of the Round Table plays the nation’s foremost dinner theater. Enjoy some of Broadway’s most soulful tunes such as “If Ever I Would Leave You” and “I Loved You Once in Silence” in lovely contrast to lighter witty fare such as “The Simple Joys of Maidenhood.” The adulterous relationship between Guinevere and Sir Lancelot is about as iconic as an adulterous relationship can get!
Through Feb. 25
Chanhassen Dinner Theatres, 502 78th St., Chanhassen
952-934-1525
www.chanhassentheatres.com

A Christmas Carol
Charles Dickens’s timeless cautionary tale of a man who gave his life to greed, only to see his life pass before his eyes on Christmas Eve night, is one of world literature’s most resounding calls to conscience. Once again, Joe Chvala has directed the story of Ebenezer Scrooge with the terrific JC Cutler in the role again as well. The Guthrie’s annual offering of the classic is perhaps the region’s major holiday event. Stellar production values and marvelous topnotch casts have always made this particular show something that you truly have to see. Especially if you’ve never seen it.
Through Dec. 30
Guthrie Theater’s Wurtele Thrust Stage, 818 S 2nd St., Minneapolis
612-377-2224
www.guthrietheater.org 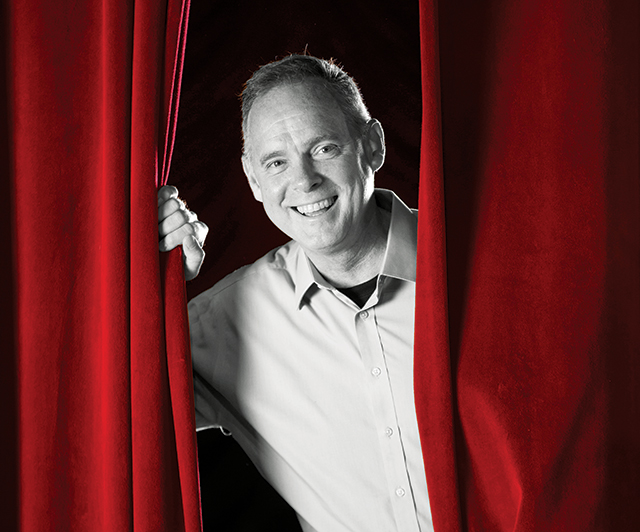 A Christmas Carole Petersen
Tod Petersen revives his classic personal story about what it’s like being the gay son of a sweet straight mother. Petersen has crafted his relationship with his mother into remarkable solo stage fare and this particular creation is the ideal piece for queer kids and their families — a wonderful way to bring us all together!
Nov. 30–Dec. 23
Ritz Theater, 345 13th Ave. NE, Minneapolis
612-339-3003
www.latteda.org

Cinderella
What is perhaps the most famous fairy tale of all time is turned on its head (and then some) in this rollicking, camp, and crossgender re-imagining of a humble girl who wins the heart of the unattainable Prince Charming. Children’s Theatre has turned this into one of the most popular holiday shows in the region. You may well bust a gut laughing because the slapstick in this show is off-the-charts brilliant!
Through Jan. 8
Children’s Theatre Company, 2400 3rd Ave. S, Minneapolis
612-874-0400
www.childrenstheatrecompany.org

The Curious Incident of the Dog in the Night-Time
This Tony Award-winner for Best Play is a truly unique mystery thriller based on the Mark Haddon novel. When an adolescent math prodigy with Asperger’s Syndrome is accused of murdering a neighbor’s dog after midnight, he finds himself as a suspect. He goes on a journey that makes him face his family, the culprit, and himself. This is an ideal holiday choice for its uplifting view of the human spirit and the spirit of a youth intent on finding the truth.
Nov. 29 – Dec. 4
Orpheum Theatre, 910 Hennepin Ave., Minneapolis
800-982-2787
www.HennepinTheatreTrust.org 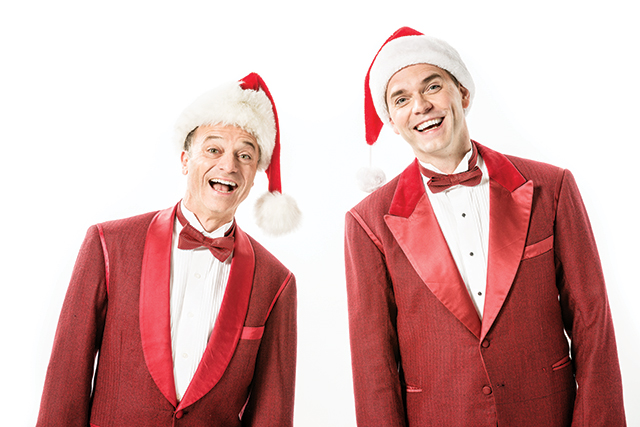 Irving Berlin’s White Christmas
Back in 1954 the film version of White Christmas starring Bing Crosby, Danny Kaye, Rosemary Clooney, and Vera Ellen was one of the true critical and box office blockbusters of its decade. Since then it has also been adapted into a stage musical and the Ordway has become renown for its productions of the piece. White Christmas creator, Irving Berlin (1888–1989) ranks as one of the foremost musical theater creators in American history. He was actually a Russian immigrant who embraced life in the U.S. and left us with a timeless body of work.
Dec. 8–31
Ordway Center, 345 Washington St., St. Paul
651-224-4222
www.ordway.org

The Magic Dreidels
Minnesota Jewish Theatre revives their delightful Hanukkah offering, The Magic Dreidels, adapted for stage by Jenna Zark from the book by Eric A. Kimmel. A dreidel is a top that spins. It is especially popular at Hanukkah time. Zark’s play has a goblin in a well and a stellar cast that includes Julie Ann Nevill, Jacy Johnson Becker, Alex Brightwell, and Gabriel Murphy. Directed by Michael Kissin.
Dec. 6–21
Highland Park Community Center, 1978 Ford Parkway, St. Paul
651-647-4315
www.mnjewishtheatre.org 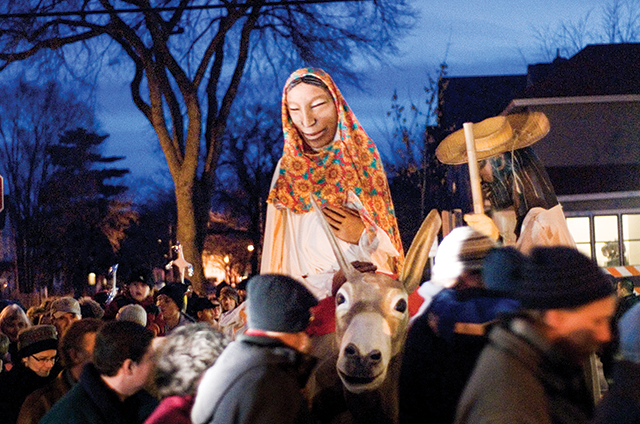 La Natividad
Performed in English and Spanish, the story of the birth of the Holy Child echoes the Mexican tradition of Las Posadas. In the Heart of the Beast Puppet and Mask Theatre collaborates with St. Paul’s Evangelical Lutheran Church and contextualizes the Nativity in terms of contemporary experience. This promenade-style production has giant puppets and flesh-and-blood actors play Maria and her fiance Jose as they go along 15th Avenue to see if someone will offer them shelter. Drawn from the gospels of Luke and Matthew.
Dec. 15–22
In the Heart of the Beast’s Avalon Theatre, 1500 E Lake St., Minneapolis
612-721-2535
www.brownpapertickets.com

Karen Sherman’s Soft Goods
Bessie Award-winner Karen Sherman looks into the essence of manual labor and how the effort of human beings facilitates the art of theater and lighting. The ensemble is comprised of 10 dancers and theater technicians. Sherman’s background is unique indeed. She sings, is a fifth-generation lasso-spinner, has studied trapeze artistry, and is experienced as a carpenter. Given the nature of Soft Goods, it sounds like it could well be a total expression of Sherman’s wide-ranging apprehension of numerous theatrical elements.
Dec. 8–10
Walker Art Center, 1750 Hennepin Ave., Minneapolis
612-375-7600
www.walkerart.org

The Lion in Winter
This hit 1966 play is set at Christmas in 1183 when England’s Henry II kept his wife, Eleanor of Aquitaine, locked up in a power play for the ages. One of their sons is gay and in 1966 this was significant as a gay representation in what was an overwhelmingly straight body of Broadway offerings. A great opportunity to see the nation’s flagship regional theater turn on the classical tradition they are noted for.
Through Dec. 31
Guthrie Theater’s Proscenium Stage, 818 S 2nd St., Minneapolis
612-377-2224
www.guthrietheater.org 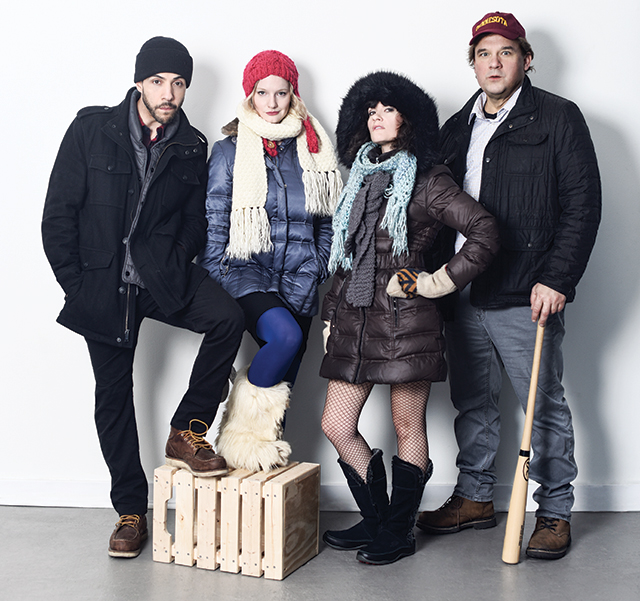 The Norwegians
Jane Froiland and Sara Marsh play two southern women in Minnesota. This pair hires a nice hit man to kill their ex-boyfriends. Fans of the Coen Brothers’s Fargo and romantic comedies will probably find this right up their alley. Directed by Joel Sass. Definitely an ideal choice if you are looking for something beyond the usual holiday fare. A project produced by Dark & Stormy Productions and The Mount Curve Company. Associate Producers: North Star Theatricals and Triumph Creative.
Dec. 8–30
Grain Belt Warehouse, 77 13th Ave. NE, Studio 202, Minneapolis
612-401-4506
www.darkstormy.org

Nutcracker (not so) Suite
This camp spoof of gay composer Peter Ilyich Tchaikovsky’s Christmas ballet classic, The Nutcracker, was originally choreographed by Myron Johnson as an annual offering for the Ballet of the Dolls. After being set aside for several years, James Sewell Ballet revived the piece with Johnson at the helm again last year. Now it returns in 2016. Be assured that this will be among the most, if not the most hilarious holiday show in the Twin Cities. If you’ve never seen, then you must see it!
Dec. 2–18
Cowles Center, 528 Hennepin Ave., Minneapolis
612-206-3600
www.thecowlescenter.org 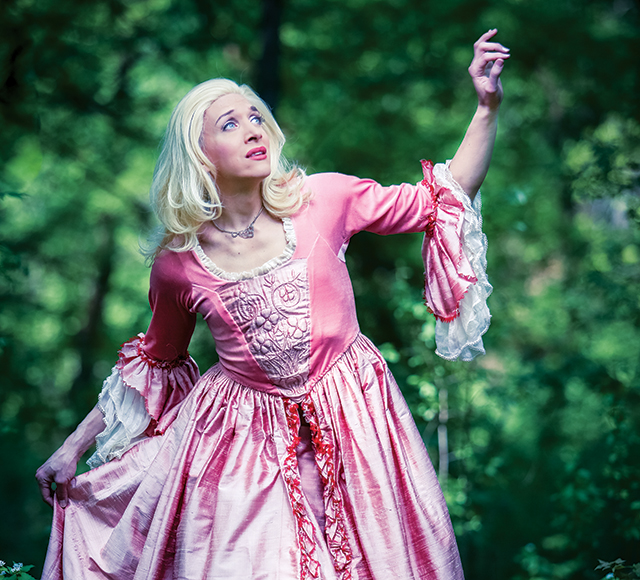 The Sleeping Beauty in the Wood
A sensual and subversive look into what the Sleeping Beauty of fairy tale fame might have dreamed about during the century she slept all the way through. How fitting that the group producing it is Collective Unconscious Performance. Justin Leaf choreographs and plays the title role. Written by Katharine Sherman. Directed by David Hanzal. This will surely be a cross-gender holiday treat!
Dec. 2–11
Red Eye Theater, 15 W 14th St., Minneapolis
800-838-3006
www.collectiveunconsciousperformance.com

Sex in the Dark
If you are looking for something in the spirit of defiance and celebration then you may want to check out Uprising Theatre Company at the Phoenix. Issues of body size, body image, and how society makes us internalize judgmental attitudes about those things are delved into. Moreover, Sex in the Dark explores another issue: transgender people wanting to be loved unconditionally. When might loving one’s self become a radical act in its own right?
Dec. 2–10
Phoenix Theater, 2605 Hennepin Ave., Minneapolis
612-377-2285
www.phoenixtheatrempls.org

The Soul of Gershwin: The Musical Journey of an American Klezmer
It’s the early 1900s in New York City, a melting pot of different cultures and musical genres: Yiddish theater, Jewish liturgical melodies, pop of the time, folk, blues, jazz, and opera. Your narrator is legendary composer George Gershwin. If anyone ever had rhythm, it was him! Klezmer refers to a Jewish musical tradition that came out of Eastern Europe. Ideal as an alternative Hanukkah choice.
Dec. 2–31
Park Square Theatre, 20 W 7th Place, St. Paul
651-291-7005
www.parksquaretheatre.org

TCGMC’s Gay Holiday Spectacular
The region’s great gay men’s chorus always presents one of the great performance events of the holiday season. This year’s Twin Cities Gay Men’s Chorus offering is modeled after a television variety show and features the Copper Street Brass Quintet. TCGMC has been going for 36 years strong and has over 150 singers! On top of that, the general public and the GLBT community adore them!
Dec. 9–11
Ted Mann Concert Hall, 2128 Fourth St. S, University of Minnesota, Minneapolis
612-624-2345
www.tcgmc.org 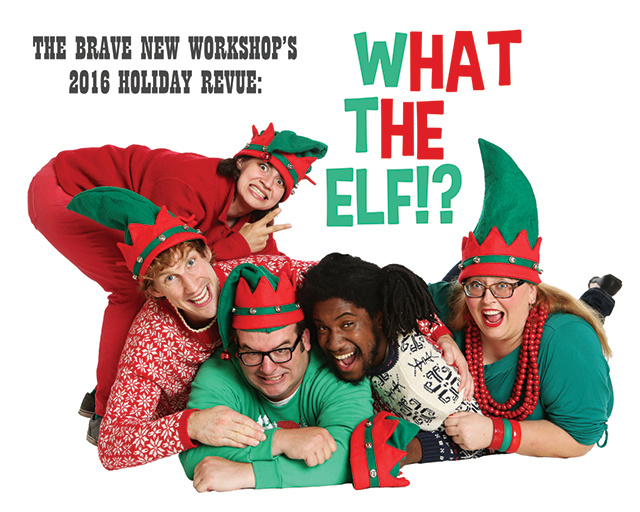 What the Elf!?
The region’s premiere comedy theater consistently produces a terrific holiday revue, not to mention that their skits always include queer issues. Denzel Belin joins BNW regulars Lauren Anderson, Taj Ruler, Tom Reed, and Ryan Nelson. I guarantee you have never seen anything like the workshop’s annual zany version of The 12 Days of Christmas!
Through Jan. 28
Brave New Workshop, 824 Hennepin Ave., Minneapolis
612-332-6620
www.bravenewworkshop.com