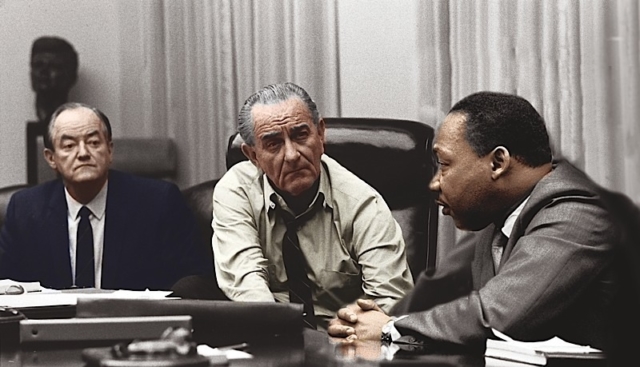 Seldom is politics as enormously entertaining as Robert Schenkkan’s Tony Award-winning play, All the Way. At the History Theatre, director Ron Peluso has staged this sweeping, multi-character marvel with a precision that bedazzles. Moreover, he has fleshed out the play’s dramatic scenes with compelling depth, while keeping the several scenes that relate the D.C. culture and activist zeal clipping along with flourish. It’s also packed with humor that ricochets between crudeness and subtlety. At the center of the storm is a towering performance by Pearce Bunting who reveals a tremendous emotional and intellectual range seldom seen in a single characterization by an actor.

All the Way involves Lyndon Baines Johnson’s first year as the American President on the tragic heels of John F. Kennedy’s assassination. It centers on LBJ’s fervent push to pass what would become historic civil rights legislation. Schenkkan’s vision is theatrically huge. He has written a protagonist of Shakespearean proportions, and, like a Shakespeare play, he has created several smaller roles, not all of whom are able to have their full stories told in the compressed time of a play’s duration on stage.

Therefore, figures like Hubert Humphrey played simply as a spotless civil rights hero and George Wallace as a stock racist villain, serve to set up the extremes that Johnson was actually torn between. This makes for general dynamics wherein LBJ’s fabled arm twisting of reluctant legislators is contrasted with vehemently fed up activists who want immediate satisfaction. These extremes are historically accurate.

Moreover, Martin Luther King (a sharp-edged Shawn Hamilton) is a major character who aggressively challenges Johnson on whether he has the courage of his racial harmony convictions or not. Schenkkan has written the civil rights icon as a strategic planner more than a lofty figure. In his scenes we are privy to discussion as it may actually have sounded.

The real blood and guts of the play’s themes comes through the figure of Fannie Lou Hamer (a passionate Jamila Anderson), a black woman who suffered violently at the hands of battering racists. She becomes the thorn in both Johnson’s and King’s sides. Schenkkan implicitly asserts that Hamer is one of the major civil rights pioneers we need to factor into our general overview more than we have.

Adding to the texture is the solidly moderate Roy Wilkins, NAACP President (and U of M grad), played with dignified strength by the charismatic Joe Nathan Thomas. Again, the playwright seems to be saying here too is another figure we all need to take a closer, validating look at. Schenkkan and Thomas dare to depict Wilkins’s moderate view as a legitimate one as opposed to a cowering one. Like Thurgood Marshall, Wilkins was acutely aware of how the downside of how radical action might play out.

The entire ensemble is impeccable in its execution of this big, complex, illuminating, and hugely entertaining production. Jennifer Blagen shines in the small but resplendent role of First Lady, Lady Bird Johnson.