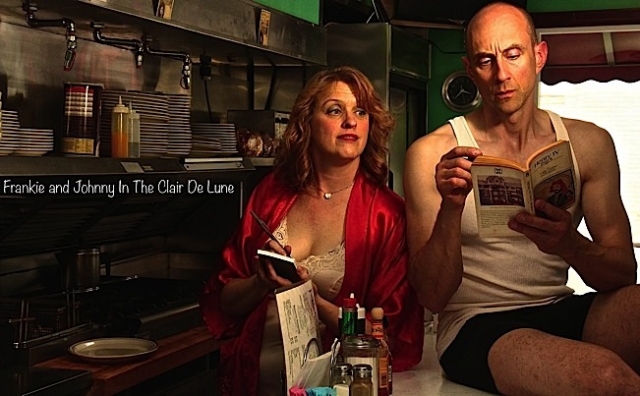 In recent years, we have rightly celebrated the emergence of gay love in films and plays. But it is crucial to remember that gay playwrignts have a tradition of writing glorious plays about heterosexual love and those playwrights have, in turn, been deeply appreciated by straight audiences. For example, Terrence McNally is known for gutsy gay plays such as Love! Valour! Compassion!, Corpus Christi, and the script (book) for Kiss of the Spider Woman. But what is probably his greatest play is a deeply heterosexual and profoundly intimate work, Frankie and Johnny in the Clair de Lune, which first opened Off-Broadway in 1987.

Casting Spells Productions is presenting a riveting revival directed by Jim Detmar at the Minneapolis Theatre Garage. McNally follows the events of a night when a man and a woman sleep over at her tiny apartment. They work together as a cook and a waitress in a diner during the day time and have decided maybe it’s worth a try to go out. The play starts as they have just ended a stormy session of satisfying lovemaking. One expects this might be the beginning of something special. However, Johnny (Charles Hubbell) turns out to be a constant chatterbox, which understandably puts off Frankie (Shanan Custuer).

This is one of the most erotic and intimate productions staged in the Twin Cities in recent years. It is like eavesdropping on a couple in their most delicate and ferocious moments. The kind of private, hermetically-sealed moments most of us would want no one to ever be made aware of. Therefore, Hubbell and Custer, are quite courageous in portraying this. Though she wears little in portions of the show and he wears only boxers throughout,  it’s not merely about that. They lay their insecurities and their souls bare in beautiful vulnerability. It’s the kind of show that, if I had absolute power, I would require all hetero, polyamorous, and homosexual couples to see because it demonstrates just the distance one might go in reaching that critical point of tenderness and connection in order to keep love alive.

I’ve watched these two actors off and on for years. Custer is one of the great comic actresses in the Twin Cities. Indeed, she is funny in this production, but I’ve never seen so many emotional shades as in this performance. Charles Hubbell has been consistently powerful since I first recall seeing him in Shakespeare’s Coriolanus some years ago. With Frankie and Johnny in the Clair de Lune, he is off-the-charts brilliant.

My only quibble is that the use of Claude Debussy’s enchanting Clair De Lune in the sound design is too quickly cut short in the times when it is heard. Nonetheless, this is a production not to be missed!