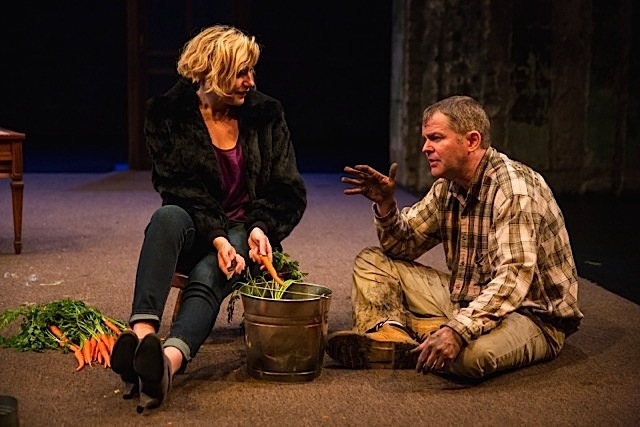 American theater has become so beguiled by political correctness and identity politics that we can foolishly discount and forget about the great straight white male playwrights who have so much to reveal to us. They are the wounded father many of us know and who all of us see in our lives in some form. No American writes with the wounded insight about heterosexual men as numinously and achingly as Sam Shepard. He is very much about the white man shaped by the dreams and illusions of his grandfathers and great grandfathers who went westward, away from the east coast, to pioneer a new life in the Midwest or the south directly below that, the Rocky Mountain west, or the west coast. Call all these regions Shepard Country. By the time the mid-20th century rolled around those illusions had become monumentally toxic.

No play captures that toxicity as tragically and with such bitter beauty as Buried Child, Shepard’s 1978 Pulitzer Prize-winner. This towering antiheroic drama with its absurdist dimensions delineates that fine line where redneck culture dissipates into white trash culture. It has been given an utterly definitive revival by the newly formed Red Bird Theatre at the Southern Theater venue. 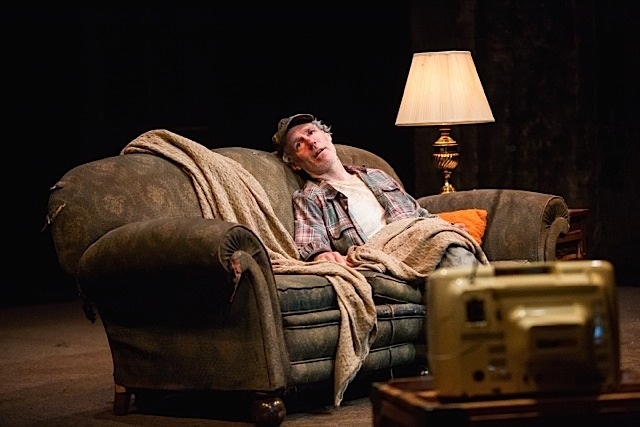 Director Genevieve Bennett, known for her fine productions of Chekhov and Ibsen, stretches her apprehension into Shepard’s ultra-gritty reflection of a tortured Illinois family that has been psychically destroyed by something that happened before its adult children were chronological adults. Terry Hempleman plays alcoholic protagonist Dodge in a performance that unabashedly exudes the ornery resignation of a man who will not forgive what was once his wife’s fleeting infidelity, nor who has ever attempted to do the inner work it takes to forgive. Moreover, like with many people, the idea of forgiving has never swum into his hardened and limited consciousness. So many men are conditioned to be tough, fiercely unforgiving, and incapable of processing sexual complexity even when a family’s survival and renewal require that.

What’s notable, not to mention, ironic, about Shepard’s scathing view of men in Buried Child is that he cuts to the jugular of masculine negativity that the countless naysayers to cisgender male negativity in the queer and feminist worlds have yet to get to first base in understanding. Shepard demands our attention as his own observation and inner work is so devastatingly apparent. We have much to learn from him. 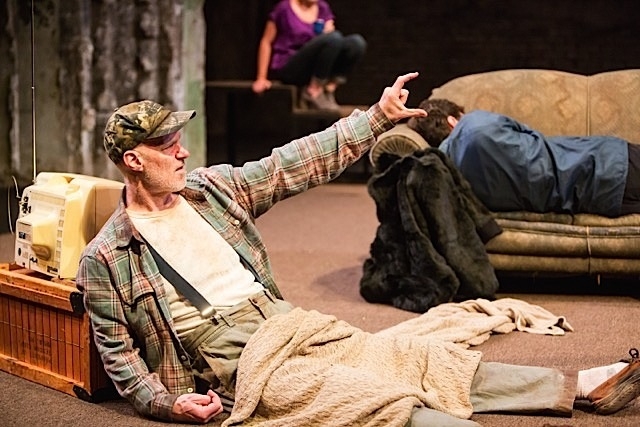 That’s why it is so significant that this great production was directed by a woman. Too many in the GLBT community are still at the Chatty Kathy level of Debra Messing’s materialistic Grace who can’t get over Leo cheating on her and gay male sob sister Will feeding into that. In gay drama, Terrence McNally’s Love! Valour! Compassion! would seem to be somewhere on the wise level of Shepard, but it is typically misdirected, including the film version. A wealthy gay male turns mean and nasty when his disabled companion strays. But in only one production I have seen of it (a student production at MCTC directed by Michael Robertson) did I see any sense that the wealthy abled gay man was a creature we should probably be disgusted with.

Hempleman is magnificently dark as he insidiously undermines his adult sons and young adult grandson right in their family farm home of generations. They’ve harvested no crops in years. Think biblical plague (that’s Shepard). It’s also one of those things that we are not supposed to acknowledge: how men psychically castrate other men. The stereotype is that women are the ones who do that. But Shepard shows a numinously grotesque counterpoint.

It is not the mother of Dodge’s sons, his wife Hallie (soulfully rendered by Barabara Berlovitz) who has damaged her sons and grandsons. She has pathetically done all she probably could have. It is Dodge himself who has done the damage and he feels no responsibility for having done so. Nor has he ever considered that to be desirable to his wife, he must refrain from being an emotional terrorist. The man is devoid of self-reflectiveness. Can one blame her for straying? I certainly couldn’t. Moreover, he fails to see that in judging so fiercely and uncompromisingly against his wife, he in turn set up a horrific dilemma for the sons. And to be fair, I must add that every day, women’s Chatty Kathy media rails against infidelity and non-monogamy enacted by both men and women. So this issue of unforgiveness and “cheating” on your significant other spans the gender spectrum.

Another powerfully poignant turn in Red Bird’s production is Brian Goranson as Tilden, the son who spent 20 years in New Mexico. Some kind of psychic wound cut so deep that it seems to have sunk his life before it really ever started. One can’t help but make comparisons to Biff in Arthur Miller’s Death of a Salesman. This wound that will not heal leads to what is one of the most staggering images in contemporary theater. Goranson is an actor who seems to be occasionally blessed in this way, as in the History Theatre’s production of Melanie Marnich’s These Shining Lives, where he delivered with wrenching and horrible beauty the spoken feelings of a husband devastated by the radium poisoning of his beloved wife. Unforgettable. It is great to see Goranson on stage again, in top form, and so very moving and giving us that particular image. 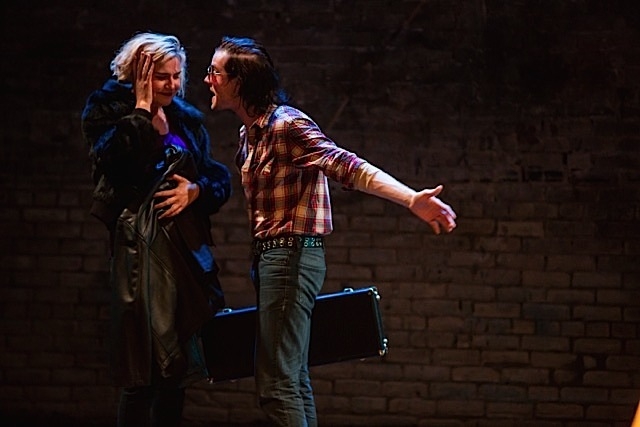 Paul de Cordova plays younger adult son, Bradley, with scorching insight. He is the brother who clearly felt unappreciated (and with reason) and he makes sure everyone around him pays for it. It’s an attitude and pattern most of us see every day. Though Bradley has a prosthetic leg that at one amazing point is literally used as an object of ridiculing aggression against him, his meanness tests our limits as well as our capacity for empathy. This is cruel but Shepard won’t countenance male cruelty, especially that which any man himself has structured into his behavior. It’s the proverbial chip on shoulder. Shepard, like a disciplinarian father himself, reminds us that life is tough. Always has been. So be better than that, knucklehead! De Cordova’s is a vividly authentic portrait of bitterness gone extremely toxic. A cautionary tale in its own right.

Buried Child is one of those challenging plays that embodies the problem of too much testosterone, meaning that when very masculine men are not mediated and balanced by enough feminine energy or gentle men around them who are allowed to be gentle, then their realm and those in their realm, are sentenced to live in a gruff psychological hell. (Think of the horrific true accounts that have been coming out about contemporary American prisons. Amy Goodman has reported on this frequently.) This cast captures this phenomenon to an unsettling degree. A few other plays like this are Shakespeare’s Hamlet, Jason Miller’s That Championship Season, Harold Pinter’s The Homecoming, and David Rabe’s Streamers in which Hempleman gave another marvelous performance years ago. 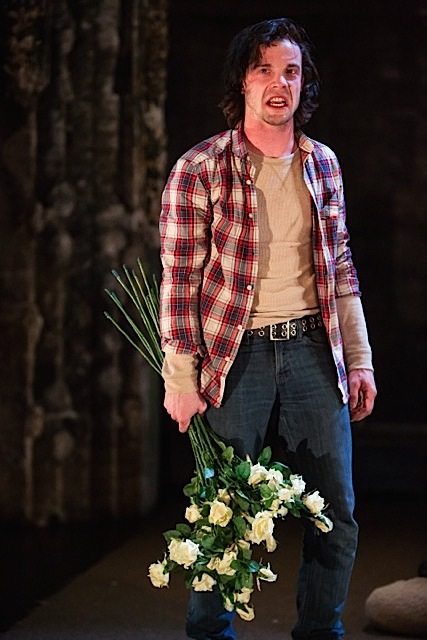 One of the most gratifying things to experience as a theatergoer is when young actors not only hold their own but flourish in ensemble with wonderful veteran actors such as the aforementioned here. Matthew Englund as grandson Vince is simply a little devil. He creates one of the most engaging characterizations of a person you can’t decide whether to love or hate. Our sympathy goes out to him when he is not recognized by his own family, but as things regress and his alcoholism becomes more apparent, his body language actually seems to match the contours of his grandfather. One wonders if he is literally becoming a new generation’s version of a toxic patriarch.

Charlotte Calvert as his girlfriend, Shelly, is simply vibrant. She brings a piercing intelligence to the one character who abruptly comprehends the level of savage dysfunction this male-dominated family wallows in. She is the one hope in the play, albeit a dim hope. Leif Jurgensen seizes the role of Father Dewis perfectly. He is Hallie’s one shoulder to cry on. The role is not written so much as a stereotype of shallow religiosity but seems to convey Shepard’s larger concern that clerical people, who may mean well, van and do lack the apprehension and full comprehension of human nature sufficient to be of spiritual help. Jurgensen’s Dewis is not a bad fellow, he just isn’t up for dealing with the spiritual demands the situation calls for. Nor has he calibrated his Christianity enough to grapple with the daunting challenge of forgiveness. So what happens when there is nowhere for a disintegrating family to go so that they might be put back on track? The answer is family tragedy. And Buried Child is certainly one of the greatest family tragedies in the history of American drama.