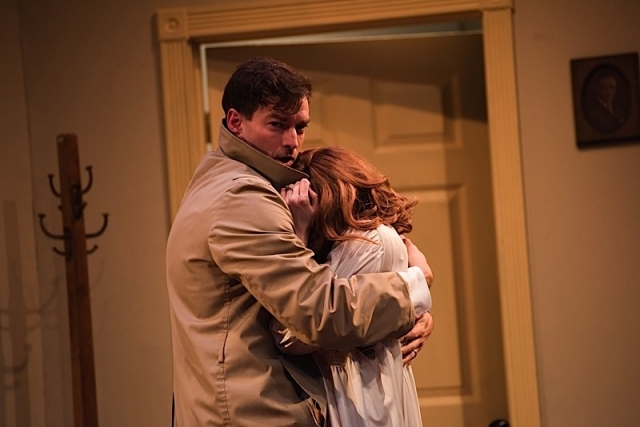 “Oh! What a tangled web we weave we first we practice to deceive…”- Sir Walter Scott

Frederick Knott (1916-2002) isn’t the legendary playwright of his generation that Arthur Miller or Tennessee Williams became. But he wrote two enormously absorbing thrillers now on Twin Cities stages that show his work has endured the test of time—over a half century. The audiences at the performances I attended of Gremlin’s Theatre’s Dial M for Murder and Theatre in the Round Players’ Wait Until Dark were utterly gripped by what they watched. That’s staying power! 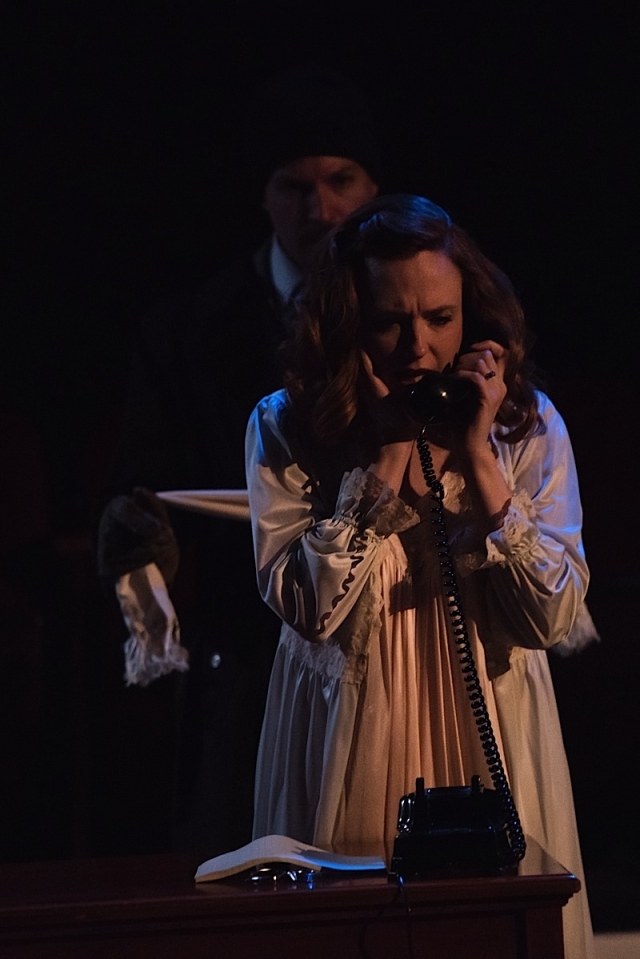 Dial M for Murder, which premiered in 1952, involves Tony Wendice (Peter Christian Hansen), a London husband who plots the murder of his wife, Margot (Emily Dussault). He blackmails one Captain Lesgate (Grant Henderson), whose past has left him open to be blackmailed. As with any mystery play, there will always be those who smugly dismiss the plot, saying they knew what was going to happen next. Of course, even if these detractors are actually telling the truth about that, they usually fail to reflect on the psychological elements that are conveyed in the process: both the criminal psychological, as well as the psychological reactions of those tangled in the web of it all. These two plays also are vivid reminders that evil exists in the world, and can come upon us unexpectedly, if not abruptly. Both productions emanate a sense of that palpably and they succeed well in their feel and body language for their historical mid-20th century period. 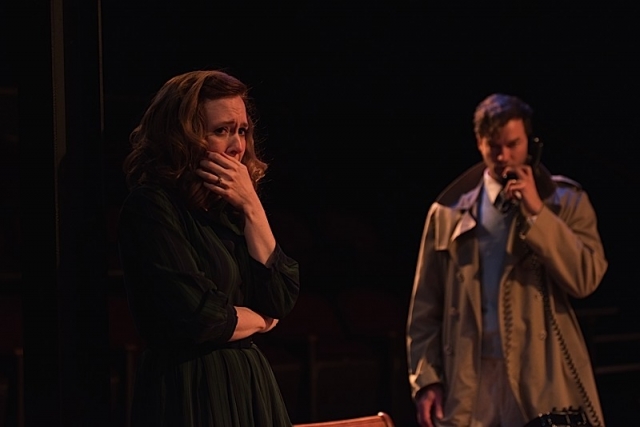 The Gremlin production is, first off, crisply and briskly paced by director Brian Columbus, which is in and of itself, a mark of excellence in the execution of a thriller, whether you predict the next move or not. Secondly, there are the psychological layers that emerge from within that excellent pacing and every Gremlin actor delivers on that to crackling effect. Steering this is the masterful Peter Christian Hansen as Tony. This actor’s thought processes sharply shift as the character gleefully charts his course, but then scrambles to cover his screw-ups and miscalculations. Tony thinks he has found the perfect recipe to commit the perfect unassailable crime, and Hansen ultimately reveals the wages of arrogance, the peril of hubris, which is a central concern of Western drama since the Golden Age of Drama in ancient Greece.

Dussault, Henderson, and Dan Hopman as Max, an American with whom Margot has shared intimate feelings, are all terrific as the pawns in Tony’s misapplied methodology. Alan Sorenson, who was named as one of the actors of the year in Lavender for his performance in The Kentucky Cycle, still memorable, way back for the History Theatre’s 1994-95 season, is splendidly stiff upper lip as Inspector Hubbard. It’s a magnetically subtle portrayal where we can only guess if the clues we the audience are aware of, are being comprehended by his character. It adds to an already juicy mystery! 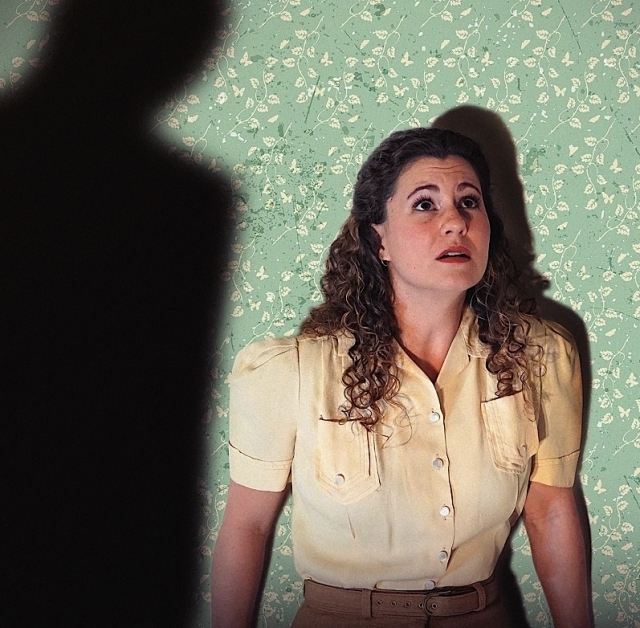 Wait Until Dark, which premiered in 1966, commands our sympathies immediately (unless one is a sociopath) because Susan, its protagonist, is blind, and unlike Tony, a very likable individual. Therefore, she is unable to see the deceptions of three intruders posing as good men who invade her New York apartment. These criminals are trying to find a doll with a secret hidden within it. They have criminal reason to believe this doll is somewhere in Susan’s residence.

Heather Burmeister holds the audience in the proverbial palm of her hand from start to finish. She plays Susan with a numinous sense of fragile vulnerability that shifts back and forth into moments of certainty and strength. Burmeister evokes moments of inner power and humility, as well, without a trace of sanctimoniousness.  As with Tony in Dial M for Murder, Knott penned a compelling lead character which requires the actor to convey fascinating thought processes in a high stakes situation. Both lead actors are simply marvelous, one being villainous, the other sympathetic.

TRP director Alissa J. Blaeser, like Columbus, keeps the action on point all the way through. Both productions have bright wit that sparkles through as dire events unfold. On the other hand, there is a sense of collective source of evil with the three intruders that differs from the manifestation of evil in Dial M for Murder. It’s one of Wait Until Dark’s notable elements. Andy Schnabel, Christopher J. DeVaan, and Ryan D. Maddux embody that quality with diabolical finesse. There is a delicate moment when Susan intuits that Mike, the bad guy played by Maddux, is handsome and she touches his face. Lovely, yet chilling.

Wait Until Dark’s humor largely comes out of the actions and comments by a young neighbor girl name Gloria who helps out Susan on a regular basis but also has that signature of youth—volatility. Alex Abdelwahed delights in the role and is invaluable to the production in maintaining the play’s crucial balance between heavy suspense and lighter moments, nicely achieved in Blaeser’s staging.

Playwright Jeffrey Hatcher has adapted Wait Until Dark to be reset toward the end of World War II in Greenwich Village rather than London’s Knotting Hill in the 1960s as in the original. This change subtly underscores how war creates an employment problem among younger men. When soldiers flood back into the homeland, those who lack certain skills in their hometown or whose previous civilian jobs may have been taken by other men or women in their absence, can become truly marginalized. Lacking a sense of security and purpose, such men are at risk of falling into the criminal underground and its Faustian bargain of seemingly easy money. In the case of Susan’s husband, Sam (a solid Parker Shook), he has grappled with psychiatric issues born of war experience. Sam appears only at brief points in the play. The same notion of men who once fought in World War II not fully adapting to the realities of civilian society is also implicit in Dial M for Murder’s post-war era of the early 1950s.

Wait Until Dark
Through Sept. 30
Theatre in the Round Players, 245 Cedar Ave. Minneapolis
612-333-3010
www.theatreintheround.org