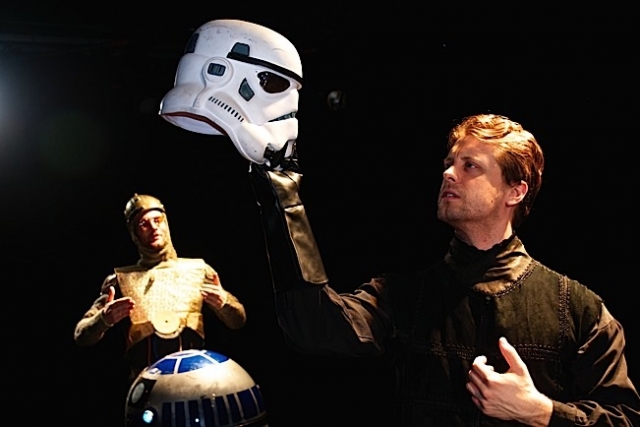 The rhythms of Shakespeare and the dynamics of Star Wars charmingly conspire in Hamluke, a Dana’s Boys Production at Phoenix Theater. The story of a young prince’s inquiry into his uncle’s murder of his father and usurpation of his throne, and his uncle’s dastardly efforts to stop the young man’s inquiry, are spoofed by a fun-loving cast whose enjoyment of their playing is infectious. One is struck by the whimsical morphing of character names between the two sources.

Charismatic Jay Kistler charms as Hamluke. He gives a swift and speedy delivery of the lines and thought processes of writer-director Brad Erickson. Kistler has expressive eyes and the stately carriage of a prince. Matthew Saxe is no stranger to playing villains and as the uncle, Darthius, he is imposing and hilariously haughty.

The entire cast delights. Double-cast Catherine Hansen shines as both Hamluke’s mother and love interest. Matthew Kozicky and Kareen Teague find a madcap chemistry as Hamluke’s two childhood pals. Brian Coffin and Jay Melchior as Horeepio and Laersolo, two other figures Hamluke has known since childhood, play their parts with masculine zest. (The night I attended a cute group of kids joyously played some of the minor roles.)

Erickson is perfectly goofy as Ghosty Wan Kenobi, Hamluke’s father figure. As a writer, he also has a great feel for and sense of the subjects he so cleverly plays with.