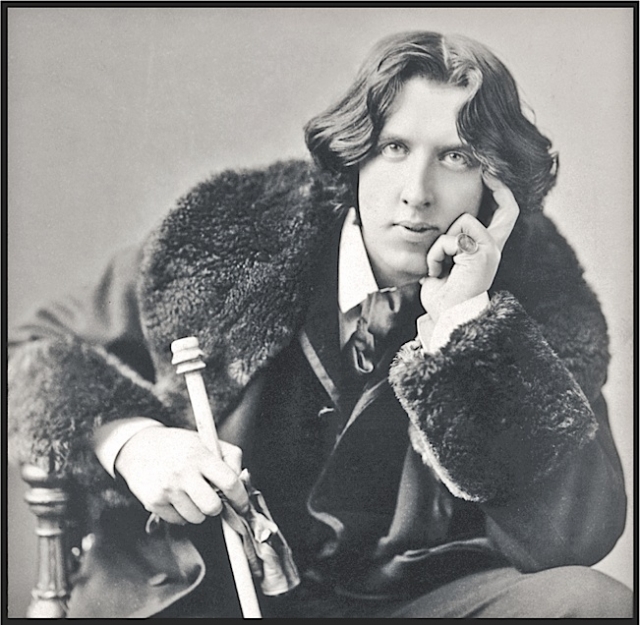 Those who share in adult intergenerational love relationships are sometimes said to be involved in mutual exploitation, as if love between people of the same generation could not be exploitative. The young bisexual or gay man or young bisexual or straight woman partnered with an older man may be considered a gold digger with a ‘daddy complex’. The older man, gay or straight, is reflexively said to be in ‘midlife crisis’ mode, assumed to be unattractive, and/or struggling with impotence issues. To trivialize the lesbian and bisexual female equivalent, just label it the  ‘mommy/daughter complex’. But of course, love is more layered and complex than such generalizations.

That’s why when you see Walking Shadow’s enthralling production of Gross Indecency: The Three Trials of Oscar Wilde by Moises Kaufman you will have much to mull over about the intergenerational love topic. In 1895 middle-aged Wilde was ultimately convicted and imprisoned to hard labor on charges of sexual relations with younger men (repeat: men). Homosexuality was illegal and ferociously stigmatized in England at the time. That ferocity comes through the figure of the Marquess of Queensberry, who was outraged by his son, Lord Alfred ‘Bosie’ Douglas’s intimate association with acclaimed playwright Oscar Wilde. When he left a calling card at Wilde’s club with the misspelled word ‘somdomite’ referring to Wilde scrawled on it -misspelling aside- the insult was clear. This prompted three trials that escalated from Wilde’s efforts to clear his name. Through all this Bosie urged Wilde on to challenge his belligerent father. (Queensberry is renown for endorsing the boxing rules that bear his title and infamous for his entourage of intimidating prizefighters.) 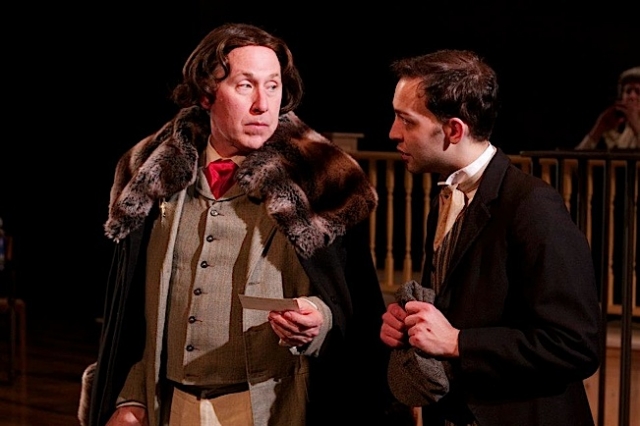 Therefore, Bosie is often reduced to simply using Wilde to get back at his overbearing father. However, Casey Hoekstra’s visceral portrayal gives us a Bosie we clearly see has been emotionally wounded by his father. This sets him beyond the superficial dandy snob stereotype that would be so easy for an actor to slip into. We can empathize with him. Moreover, Bosie, in his youth, had been, as Hoekstra puts it “an athletic boy by nature, who grew up riding horses and rough-housing with his brothers. He was a champion runner at school until a knee injury forced him to quit. As a rule he disliked the scholarly rigor of schooling, dropping out of Oxford in his final year.”

That said, Bosie expressed himself well. In his early 20s he wrote poetry which seemed to have genuinely impressed Wilde: “Your sonnet is quite lovely, and it is a marvel that those red rose-leaf lips of yours should have been made no less for the music of song than for the madness of kisses.” Hoekstra reflects “it must have given him a great sense of self-worth, that he was important, that he did matter, and furthermore that greatness (Wilde) saw great potential in him. So when Bosie’s father, who so frequently belittled and criticized his son, condemned their friendship and intimacy as abhorrently vile, Bosie was understandingly infuriated. Oscar made him feel loved, worshiped him with profound language, while his father used any excuse to demean him, crushing him back into the uncertainty he felt as a neglected boy. When Bosie’s father commenced his assault on their relationship, Bosie acted impulsively, as he frequently did, a trait of his young nature which Wilde seemed to cherish exactly for its willful abandonment.”

This has us consider, in turn, that Wilde may have delighted a bit too much in Bosie’s defiant attitude. Was it wise of Wilde to show off his exceptional wit as a way of undercutting Queensberry and by extension, the Crown? Did his ego make him lose his balance in a delicate judicial situation? Whatever, as director Amy Rummenie’s spellbinding cast shows us, Wilde paid for his lack of restraint and self-possession with the full punishing weight of the Crown.

Indeed, it seemed unimaginable to some that Wilde would not ultimately win out. But such lack of imagination overlooks the tectonic power of entrenched hierarchies, like the British Empire superpower of the time. The current day parallel in the US today is gay political prisoner Bradley Manning. Hoekstra adds “Oscar becomes a bit of a hero because he stands up to Queensberry. I don’t think Bosie sees any way such a blunt and brutal man as his father could overcome Oscar because he’s so eloquent. I think Bosie sort of views Oscar as invincible.” Of course, you can’t beat City Hall, or in this case, the Crown. In the production Craig Johnson and James Tucker, both excellent, passionately contrast one another as Wilde and Queensberry.

Hoekstra’s is the sort of masculine portrayal that thankfully we are seeing more of now that we are out of the Priscilla, Queen of the Desert era. In these years after Brokeback Mountain and Jeff Gannon and now Jason Collins, more people are realizing what the Greeks intrinsically knew, that masculinity in men doesn’t cancel out homosexual desire and that sometimes femininity in men doesn’t necessarily equal homosexuality (eg. the young buck in the opening sex scenes of the film, Shortbus, whose manner after the opening scenes would be considered ‘gay’ at first blush by many people.) This is a basic realization that many older men, conservative straight and liberal gay, are actually struggling with. An ignorant stereotype that crosses the sexual orientation barrier. Perhaps this is the real midlife crisis.