The farmer with the pitchfork, the lady in the apron, the arched window of the farmhouse where they stand: just about the most widely-recognized painting in the whole wide world. (It’s actually number two, beat out by “Mona Lisa.”) “American Gothic” — revered, emulated, parodied — was painted by Iowan Grant Wood in his Cedar Rapids studio in 1930. It won third place in the Art Institute of Chicago’s exhibition, and there it resides today. 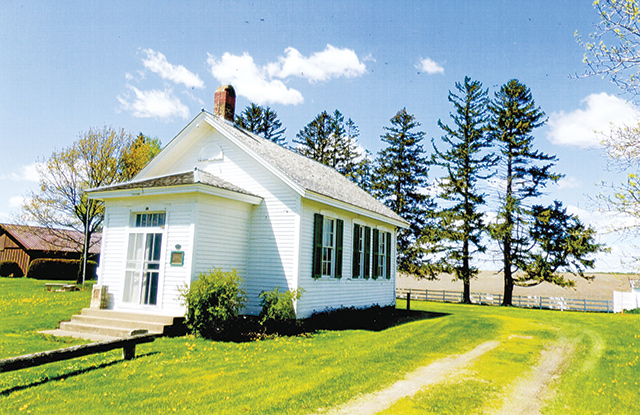 But everything else about Grant Wood belongs to Cedar Rapids, where his 125th birth anniversary is hailed this year. One of the most irreverent salutes (he’d love it) is “Overalls All Over”: 25 pairs of the iconic couple placed around town (maps available), each painted with a different twist: “The American Hipsters” with their lattes; “Andy & Edie”, a Warhol lookalike; and General Mills-sponsored “Gothic Spoonful”. A commissioned American Gothic Symphony will be performed in September.

But other Wood-work is on view around town year-in, year-out. Start with the Cedar Rapids Museum of Art, which boasts the world’s largest collection of the artist’s work: 300 pieces, which salute his skills as a carpenter and metalworker, too (Oh, that corncob chandelier!). Trace his stylistic evolution from Impressionism following an early trip to Paris to the tightened and simplified style of his maturity, emulating the meticulously rendered portraits of artists like Durer, Memling and the Dutch.

Oh, look! There’s the “Woman with Plants” (his mom in 1929). And Wood’s landscapes like “Young Corn” of 1931 with those rolling hills, repeating rows and lollipop trees. Also the works of his BFF, fellow painter Marvin Cone. (It was Marvin who used to come by the Carnegie Library where the teenage Grant would sleep to guard its artworks. Marvin would toss pebbles at the window and yell, “Wake up, Grant! We’ve got to go to school!”) 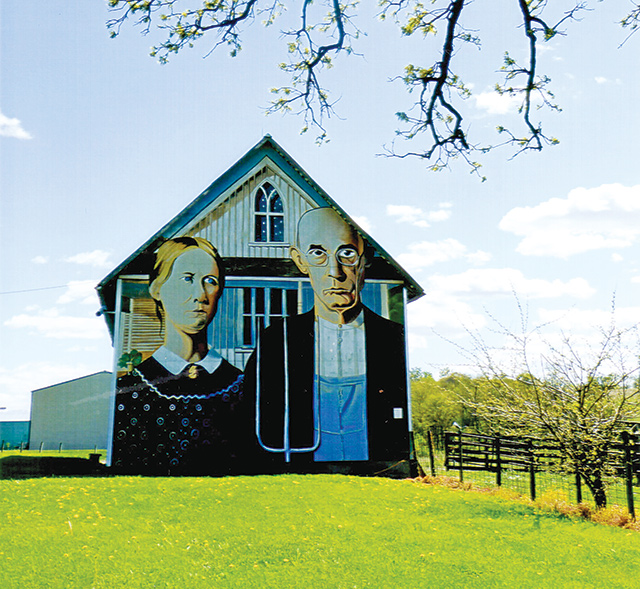 A short hike — call it a pilgrim’s procession — takes you inside the tickings of Grant Wood’s mind: his tiny-as-a-playhouse studio, where he lived with Mom and sister Nan, both of whom he painted here. His front door, fashioned from a coffin lid, supports a clock face dial that indicates his whereabouts: taking a bath, throwing a party, etc.

It’s the carriage house of a patron who previously owned the sweeping Brucemoor estate with its Queen Anne mansion. At 35, just retired from teaching to pursue art, Wood was hired to decorate a sleeping porch for the family’s daughter: a bower of plaster rosebushes and forest creatures for which, in 1924, he was paid $182 (currently worth $3.5 million). Don’t miss the basement’s man cave, fashioned in exuberantly tacky Tahitian style, complete with waterfall.

Coe College’s library sports a mini-museum of works by Marvin Cone, who established its art department in 1934, and contains Wood’s portrait of his buddy as well as seven immense mural figures, originally painted to decorate a coffee shop. (Yes, that’s Mrs. Cone posing as a farmwife.) P.S. The library also houses works by the likes of Picasso and Matisse.

At the Iowa Masonic Library and Museum, blaze a trail through its collections donated by eccentric hobbyists to gaze at Wood’s “First Three Degrees of Free Masonry” of 1921. Or not. But do not miss the Veterans Memorial building, where Wood lobbied to create an immense stained glass window depicting six soldiers, one for each war, including the shirtless figure representing 1812, rumored to be Wood’s boyfriend. The artist had never worked in glass before, but sped off to Munich for a crash course in its design, which irked Cedar Rapids’ citizens no end, like sleeping with the enemy so close after the finale of World War I. 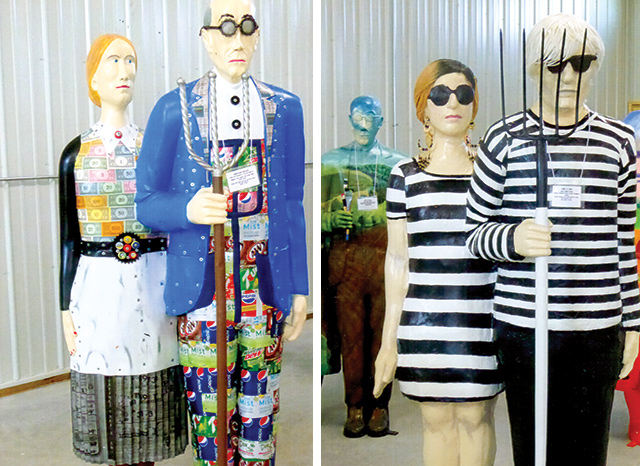 Okay, you wonder: Is there anything else to wow visitors in Cedar Rapids? You bet, starting with Czech Village, hosting the National Czech & Slovak Museum & Library, with its actual immigrant house of the 1880s, complete with accordion, gas lamps, and enameled dishpan. Continue to the museum’s freedom exhibit, where life-size figures of the 19th and 20th centuries “speak” of what brought them here (serfdom to the Communist dictatorship). Here, the story of the Czech and Slovak people is told from the ninth to 20th century, climaxing in a vivid flurry of embroidered costumes and collection of stylish blown glass, a favorite Czech art form.

The surrounding village is a treasury of bakeries (think: kolaches), antique shops and the Lion Bridge Brewing Company (tour, sip, and eat). Then cross the iconic Lion Bridge to NewBo, aka New Bohemia, and its meeting place, the NewBo covered market, built amid the rehab of the city’s disastrous 2008 flood and today hosting weekly gatherings like yoga classes and bike crawls. Across the street, a bookstore rests under a performance space and, beside it, Brewhemia, an artist-forward coffeehouse (breakfast bonanzas like caramelized walnut, pear and brie quiche or cinnamon rolls far too big to be legal). It looks out upon Raygun, an outfit sporting its snarky designs for mugs, towels, onesies and T-shirts with bold slogans like “Cedar Rapids: More Than Just Sex Appeal” and “Listened to NPR Before It Was Cool.”

Yeah, yeah, but is there anything to eat? Gotcha covered there, too. Start munching at The Class Act in the design-y Kirkwood Hotel, starring a sublime starter of grilled asparagus with saffron hollandaise and another of scallops paired with bulgar salad and tomato, preceding bacon-wrapped rabbit, duck breast with parsnip puree and pickled cherries, or deconstructed pot pie favoring thigh of guinea hen, rainbow carrots, pea puree, and potato.

At Zin’s, feast on a mix of small plates segueing form chile verde pork carnitas to quinoa chickpea salad, from prime rib sandwich to Thai chicken. Look for the line high on the wall that denotes the level of the infamous flood. Head to nearby White Star Ale House for brews galore, abetted by entrées like the kind of pork (shank, chop) that put Iowa on the map. And don’t miss a breakfast at the ultimate diner, Riley’s Café, famed for eggs-plus-meat-plus-biscuits-plus-more, with waitresses that call you “Baby” and keep the coffee coming. Obama ate here in 2012 and signed the wall to prove it. Did he make it to the gay bar, Club Basix? Don’t ask, don’t tell. For your own chance, visit www.gocedarrapids.com.