If this town were in our home state, we modest Minnesotans might call it Above Average Rapids. But, in Michigan, they call it Grand.

Q: Why? Three guesses: 1) Grand Rapids is big (Michigan’s second largest city), yet its compact downtown is easy to meander; 2) It’s terrific, boasting a vibrant urbanscape; 3) It’s situated aside the rapids of the Grand River, leading to Lake Michigan 30 miles away.

A: All of the above. And it’s at its grandest during ArtPrize, the annual 19-day celebration in which 1,800 artists, from every state and around the world, are paired with close to 180 display venues within a three-mile radius. ArtPrize salutes art of all stripes: paintings, sculptures, installations, and time-based projects, such as video, ranging from traditional to decidedly unorthodox (think: plastic cups taped to a chain-link fence). Art spills out of nearly every edifice, from the city’s formal art museums to hotel lobbies, restaurants, office spaces, bars, and laundromats — even the police station.

The festival, launched seven years ago, was conceived “to surprise, delight, amaze, confound, and infuriate” the public, says its founder, and it delivers. Voyeurs, numbering over 400,000, range from grade-school classes to seniors from nursing homes and roving bands of teens. Joe Six Pack jostles the Mayor, checking venues off their lists. And every visitor is invited to vote for a favorite, who (along with a winner chosen by a jury of experts) walks off with a grand prize of $200,000. Live TV coverage pre-empts prime time, and conversations in bars and restaurants bristle with “Have you seen….?” and “What did you think of….?”

My personal faves ran the gamut from meat-locker cuts fashioned of fabric to a photo essay exploring the struggle of gender identity; from bikes decorated in Native American symbols to connect kids to their culture to a camper vehicle parked on a bridge (walk right in); and a shimmering glass-ornament forest in the lobby of the grande dame Amway Grand Plaza Hotel, aside the river walk. 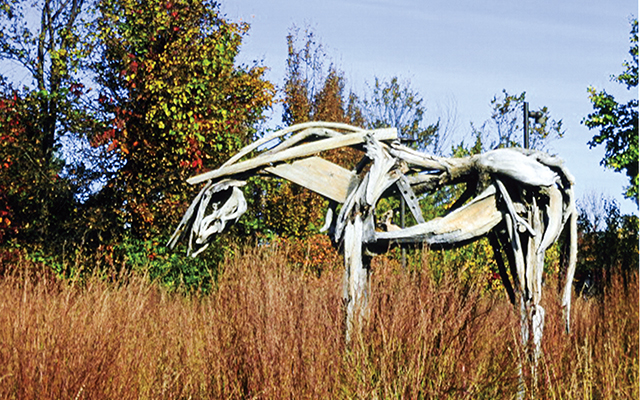 History buffs head for the Public Museum on the riverbank to wander through the Streets of Old Grand Rapids wing or learn about the lifestyle of the original Anishinaabe Nation, whose burial mounds rise nearby. Aside it, the Gerald Ford Presidential Museum executes vivid reminders of the issues this president faced when stepping up after Nixon’s resignation focusing on reforming the CIA and de-bugging the White House post-Watergate, then what he called “the saddest hour of my time in the White House”: the evacuation of Saigon as the U.S. Army’s presence in Vietnam disintegrated.

But the best of the best, the axis of culture and beauty, lies a short ride from downtown: the 158-acre Frederik Meijer Sculpture Gardens. A tram tour creeps through forests shining with creations by bold-name artists: one of Deborah Butterworth’s horses; “Iron Tree” by Chinese dissident Ai Wei Wei; a Rodin; a Henry Moore; a Claes Oldenburg; the huge red signature work by Alexander Liberman; Louise Bourgeois’ own signature, a mega-spider; and the photo op to surpass all photo ops, a giant — giant! — Trojan Horse constructed from the unbuilt-in-his-lifetime design of Leonardo da Vinci. Also: an indoor sculpture gallery (think glassblower Chihuly), a Japanese garden, and a tropical greenhouse.

All of these works make me thirst for Grand Rapids’ other major art form: beer. Called Beer Town USA, sudsters can belly up to its 13 downtown breweries, including Founders, the world’s largest, where (with the help of dedicated friends) I sampled all 24 of its brews, starting with best-selling All Day IPA. Downtown’s newest, HopCap, boasts 150 taps, including a slew from Michigan. 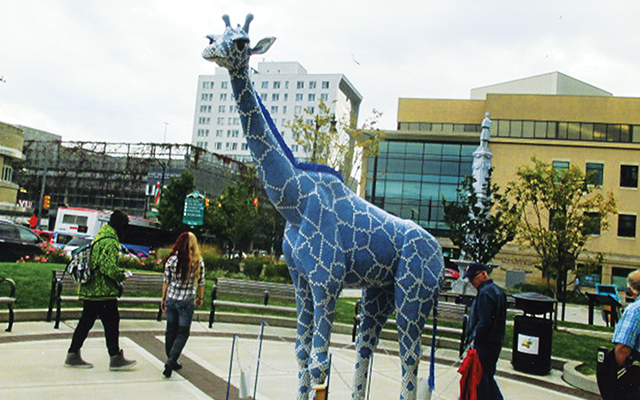 Want fries with that? Spuds — and other yummy edibles from barbecue to sushi, maple syrup to gelato — get star treatment at the modern, modish Downtown Market, sporting half a dozen restaurant counters as well as purveyors of meat, fish, cheese, and more.

Or leave the cooking to the pros and head to Wolfgang Puck’s brand-new venture, The Kitchen, debuting at the Amway, featuring crab cakes in pesto vinaigrette, kung pao lettuce wraps, and a superb tuna tartare as well as signature pizzas and pastas and a superior schnitzel. The Amway’s rooftop Cygnus27 restaurant offers food as stellar as the view, from its best-selling grilled corn salad, to winners like short ribs in Founders Pale Ale; green mole scallops paired with carnitas; and salmon in poblano pesto.

Across the street at the J.W. Marriott, its superior dining spot, Six.One.Six, offers a killer kale salad followed by plates to share (if you can bear to), including scallops in sweet corn cream; roasted marrow bones; and short ribs with celeriac-caper slaw. Climax the feast with pumpkin-spiced bread pudding sided with crème fraîche gelato or the chocolate madcap, which earns its name. 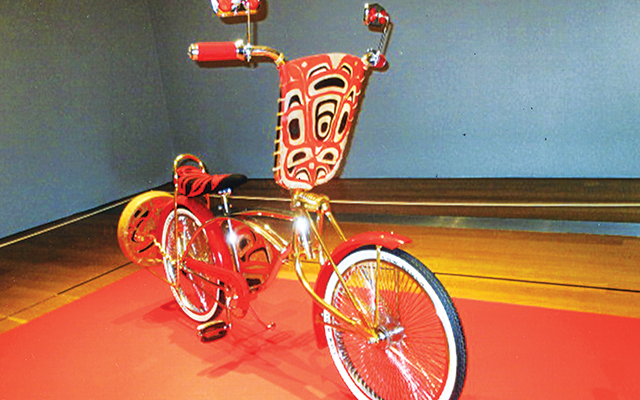 Cross the street in the opposite direction and you’ll reach Reserve, housed in a former bank, that banks its reputation on monumental Monte Cristo and barbecue pork sandwiches, sided, if you’re smart (or defying your doctor) by pork fat fries. For a nightcap, slink into the speakeasy deluxe called the Lumber Baron Bar back at the Amway to sip a classy Scotch or Bourbon.

The Advocate has named Grand Rapids “one of the gayest cities” in the land. Who knew? Well, the boys who visit its clubs, for sure, including The Apartment Lounge (dancing, bingo); Rumours Nightclub (drag shows, go-go boys); Rockwell/Republic; Diversions Video Bar (karaoke); and Grand Rapids Renegades for GLBT line dancing.