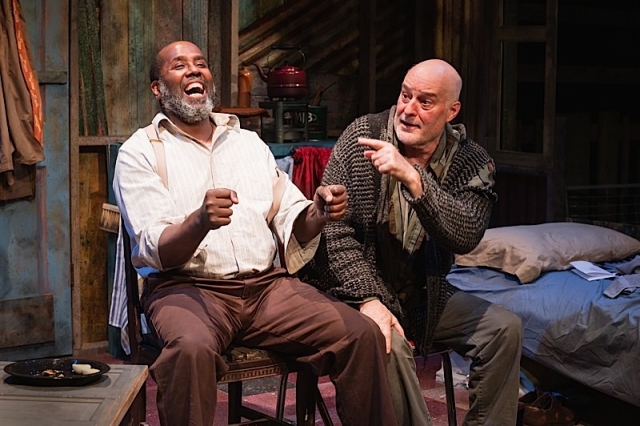 Pillsbury House Theatre is offering one of the major classic plays that grapples with the thorny subject of racism. Mixed-race South African playwright Athol Fugard’s Blood Knot from 1961 is receiving a moving revival directed by Stephen DiMenna at Pillsbury House Theatre. Two brothers born of the same mother by different fathers demonstrate the cruel acceptance gap experienced in the Apartheid era. Lighter-skinned Morris (Stephen Yoakam) is a homebody who has returned to their shack of a home in what was referred to as the “colored section” of Port Elisabeth, while his darker skinned brother, Zachariah aka Zach (James A. Williams), works a job in which he stands unreasonably inhumane lengths of time, in order to support them both financially. One of the play’s vivid images is of Morris bathing Zach’s aching feet in a container of bath salts. One notices a Bible in the shack and cannot help but think of Christ washing the feet of his Disciples. 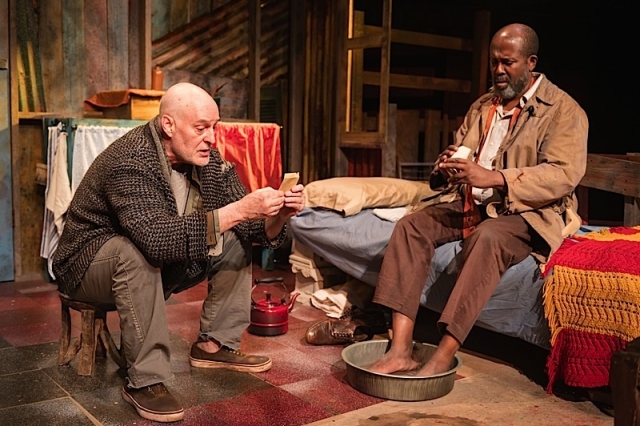 Apartheid was a brutally enforced segregation of the races in which those of white European descent comprised the ownership, business and educated classes. It truly embodied authoritarian white supremacism. Romance, sex, and even platonic interaction across racial lines were illegal and non-whites who crossed those lines were frequently tortured, beaten, and killed for doing so. It was a perfect excuse for a group of people to indulge their sadistic tendency on less powerful groups. As one could imagine, tension infused the air so that even suspicion of attraction to a white person, especially to a white woman by a black man, could trigger bloody violence.

The Population Registration Act of 1950 mandated that every South African inhabitant register to be classified in terms of their racial characteristics: e.g. characteristics of hair on the head and on other parts of the body, skin color, facial features, language and area lived in, among other criteria. During Apartheid passbook laws were enacted to squelch freedom of mobility of blacks. Blood Knot seamlessly conveys how such degradation is internalized into the hearts and minds of subjugated people in order to maintain systemic racism. 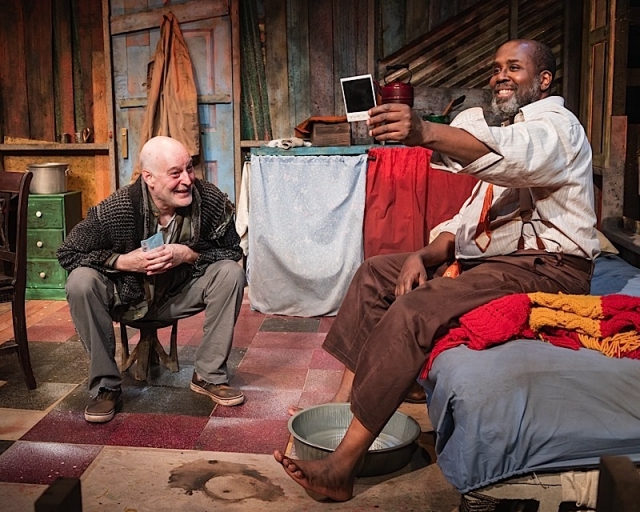 Worldly Morris has been able to pass as white in South African society, therefore he is more familiar with the codes and rhythms of the privileged racial class. Naive Zach has lived a sheltered life, stratified away from whites, where he has not fully fathomed just how cavernous the gulf between the races actually is. He has not fully and completely apprehended that his lot in life is to cower before whites. Therefore, when he innocently takes up a pen pal relationship with a white woman, he fails to grasp the peril of such an activity. However, Morris fully recognizes the grave risk this is.

As fate would have it, the woman’s letters convey that she seriously wants to meet Zach, which if actualized would result in cruel punishment for the man. Such a harmless, consensual action as pen pal writing would be tantamount to rape and the white police machine would be right onto him. What a mad time it was. Totalitarian through and through. The first performance of Blood Knot, was staged in Johannesburg, and no other performance followed as it prompted the government to prohibit racially mixed theater casts and audiences. Fugard’s passport was taken away from him because of it. 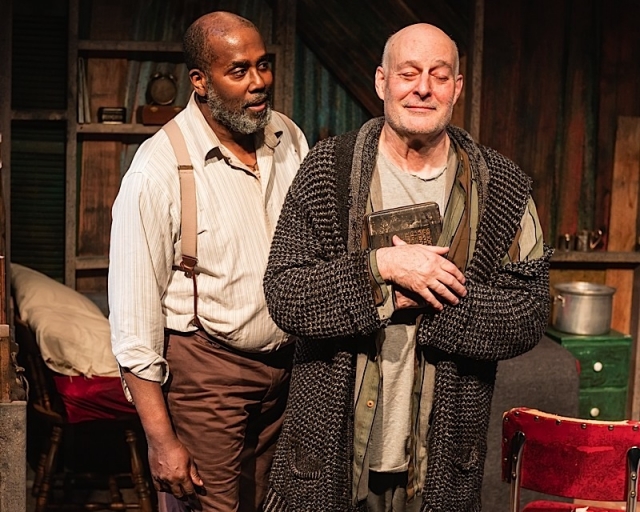 The second act journeys into intense territory played viscerally by the actors. The possibility is put forth that fairer skinned Morris might pretend to be Zach and presumably win the affections of the idealized white female. Yoakam and Williams are deeply natural as if they were not only of the same blood, but of a shared mutual psyche. The play’s crowning psychodrama section demonstrates that to gripping effect.

When the impersonation idea is first floated, Yoakam evokes Morris’s heightened fear of women, more specifically, his fear of female sexuality. His insecurity is palpable and touching. However his personality backlashes. As Morris seems to buy into the idea, a dominance-submission role play between the two brothers ensues—genuinely dangerous and breathtakingly portrayed. The delicate Morris shifts into a racist authoritarian persona, triggered by donning the new suit Zach bought for the special occasion of meeting the white woman. Whether or not you’re familiar with the notable fight choreography of Annie Enneking, you’ll sense her imprint here.

Zach, in reaction, is triggered into cowering in horrified shame before the representation, hatefully played out by his own brother. We feel as if we are in the hubris-driven presence of the race that sees itself as the Master Race. Yoakam is like an apparition come to life. Williams is wrenching as he evokes a Zach who is metaphorically clubbed by the realization that he is considered less human by the powers that be, if not subhuman. This thought had never actually occurred to him before. Does he now wonder if that trait has lain dormant in his own brother? His own blood? 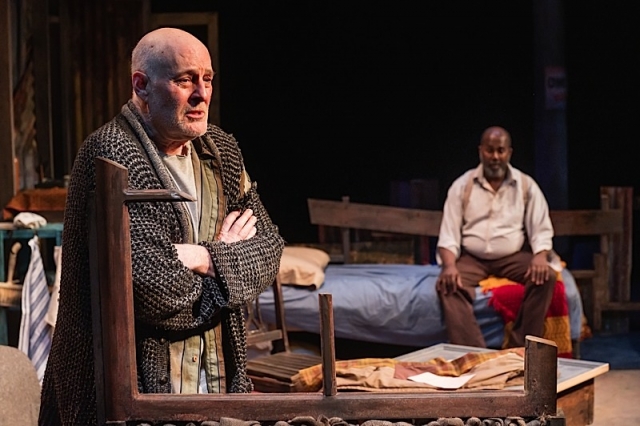 In turn, Morris is jolted into the realization that he himself is capable of manifesting evil. Is this racism who he really is or is he just carried away by “the character” of the white supremacist he seems to uncannily channel? Fugard’s writing is utterly gold standard here. In 21st century playwriting and screenwriting, we seldom see the same wrestling with the unbidden subconscious in work about bigotry. Works regarding race and gender identity have tended to largely be satirical or ideological dramatic statements. Lots of blame-gaming. Politics tend to trump psychology. It’s as if when the masterful August Wilson and Wendy Wasserstein died, so early in this century, and before their time, American playwriting about race and gender was set back and the polemics of Tony Kushner and his idolaters came to hold sway. Only in the past five years has American theater regained some sense of equilibrium.

However, South African Fugard, being learned in western literature, like his extraordinary contemporaries, African-Americans Lorraine Hansberry and James Baldwin, and later on, August Wilson, balanced psychology so that the blunt cudgel of ideology didn’t get in the way of psychological truth. All four trust that their characters and their actions in a racist culture will read. They don’t speechify. And of course, they do indeed transmit to the audience indelibly. Which is why their work is classic. 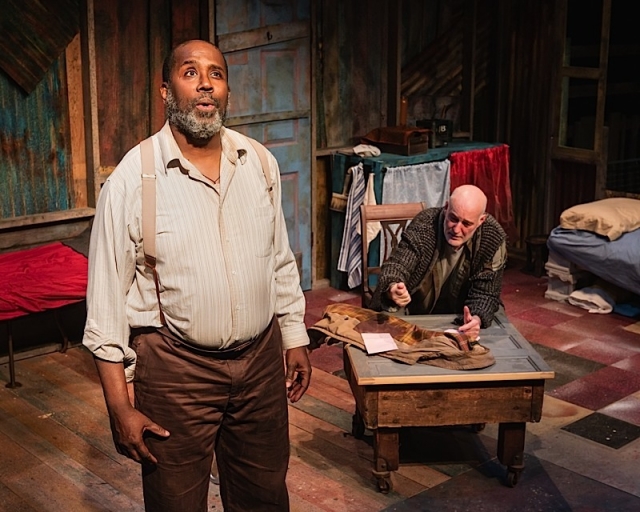 With Blood Knot, without any banner-waving, there’s never any doubt about the denigrating nature of Apartheid. It’s built into the story organically. No commentary necessary. It’s right there. What the brothers say about their social world is dreadfully matter of fact—no propaganda or hand-wringing needed, thank you. This makes for a more powerful and lasting impact and will always up-end even the most resistant audiences. Director DiMenna understands this inherently and his wondrous actors manifest this accordingly. They trust the text.

If you saw the devastating film Tsotsi, Oscar-winner Best Foreign Language Film for year 2005, from Fugard’s novel, you will appreciate the informed detail the Pillsbury House creative team has rendered. Joseph Stanley’s set has specific junk piled stage right that places us directly into the fact that we are in a slum. His interior of the shack is intentionally claustrophobic and fittingly wretched in its look, though it contains nice touches of domestication we assume reflect the sensibility of Morris. In support of that, Kellie Larson’s props enhance that quality well. Trevor Bowen’s costumes contrast the drab with the lovely. Michael Wangen’s lighting and Katharine Horowitz’s sound design serve the “lower depths” sensory world of the play with artful understatement.