Gracie Gold: “I Have Nothing to Lose” 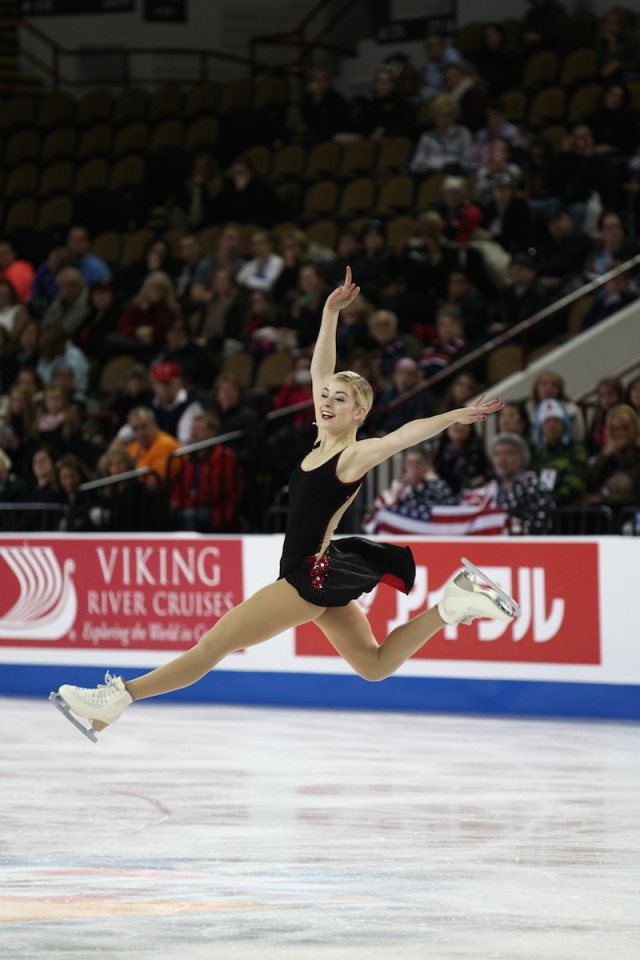 Gracie Gold feels confident going into Worlds, as she should. After earning back her national title in St. Paul in January, Gold is slated as a frontrunner when she takes the ice in Boston this month.

But following Nationals Gold fumbled at the Four Continents competition, not placing as well as she had hoped. But, ultimately, that could make all the difference in pushing Gold toward that podium. “I didn’t have quite as long training time before Four Continents and it’s consistently been a really hard competition for me for some reason,” Gold says. “It must just have bad juju for me. But this year, again, the short program is just not up to par. Going into Worlds, I just got back from Four Continents super motivated. I was having this amazing season, and then had a terrible competition right after. So I just got all the bad kinks and juju out so going into Worlds; I always like to come from behind.”

As Gold admitted, the short program has been her downfall before, and reporters have given Gold the burden to carry, continuously mentioning her struggles with the short program followed by a seemingly flawless freeskate. As the champion she is, Gold takes it in stride, saying, “It has become kind of a thing. But it’s not just this season, especially when training isn’t going very well. I get so jazzed for a competitions. So when it comes to short program, I just come out of the gate hot and end up making mistakes.”

The mantra that Gold keeps telling herself is that it’s just a job she has to do. It’s three jumps — no big deal. “I know the program through and through,” she says. “So I just have to do three jumps, three spins, and a step sequence. It just sets you up for the long program. I just have to minimize it and not stress too much. Just focus on just doing your job, making it happen and then living for the long program.”

Yet, there is still some women’s skating history to overcome. Not even an hour had passed since Gracie Gold’s come-from-behind effort clinched her second national title when the elephant entered the room during a press conference. No U.S. woman has won a singles figure skating medal at the world championships or Olympic Winter Games since 2006.

The medal drought is a sore point in a proud U.S. program that didn’t miss an Olympic medal podium from 1968 to 2006 and was nearly as flawless in the annual world championships. It’s of particular note this year, though, with the World Figure Skating Championships coming to Boston in March and April.

“That statistic is really sad,” Gold continued, “but it’s not as if U.S. women have been irrelevant to the sport of figure skating.”

It’s true. Gold finished fourth at the Sochi 2014 Olympic Winter Games, and Mirai Nagasu was one spot off the podium four years earlier in Vancouver. It’s been a similar story at worlds, with Gold finishing sixth, fifth and fourth at the past three worlds, and Ashley Wagner finishing fifth in two of those years and fourth in 2012. Gold and Wagner also earned Olympic bronze medals in 2014 as part of the team event.

But it’s those top three spots that people remember. And Gold has said before that a fourth or fifth place finish at Worlds would feel “irrelevant” to her, as if she “didn’t do anything.”

“As I get closer and closer, I realize that the concept of not making the podium is… I would be crushed,” she says. “Even if I skated my two best programs and I wasn’t good enough to be on the podium, that would be kind of more disappointing in some ways.”

Her increasingly higher finishes have prepared her to finally stand on that podium. “At this point I don’t have as many fears [about heading into Worlds] as opposed to I feel like I can just jump right to the top,” she says. “We are all extremely high level, anything on the podium is the next step. If I’m not on the podium, then I’m where I was the other years. I’m either on the podium, or I’m not. I have nothing to lose.”

A surprise to some fans, coming from behind to clinch the national title in a close finish ahead of Paulina Edmunds didn’t alter her training regimen at all heading into Worlds. “It didn’t particularly change anything because I felt like I was the best in the U.S. and being behind someone in the short program threw me off more than anything,” she shares. “I just felt like the title was mine, and it just wasn’t even fathomable in some ways that I wouldn’t be the champion. Like it was just this feeling. That book has been closed and I feel great about St. Paul.”

With St. Paul and Four Continents behind her, Gold opens a new chapter with Boston looming on the horizon. Team USA has the pleasure of skating on home ice, which Gold says adds to the team’s excitement.

Gold says, “Just knowing that it’s on home turf and everything will be really familiar, not worrying about the drinking water or what the food is going to be like in a different place, just having everything be comfortable will make a big difference. We kind of know the venue, which just gives everyone some familiarity and comfort.”

Following her time in Boston, regardless of the outcome, Gold is set to hit the road for a national tour of Stars on Ice, slated to stop in St. Paul on May 1. Stars on Ice allows skaters to show off their talent in a more fun, informal showcase without the pressure of judges and scores.

“The focus on your skate and performance is really different. It’s all about the audience appeal, there’s no judging and no points. You’re meant to put on a show for people who love figure skating,” Gold says. “We’ve always had some great audiences, and St. Paul will always be special to me because of my nationals wins.”

Stars on Ice doesn’t come with a title or a medal, but there are still countless reasons for a skater to join the tour. Most notably? For the fun of it.

“It’s really fun,” Gold laughs. “Especially when it’s a full house and a lot of people come. It’s kind of like a victory lap — that kind of feeling. It’s really simply skating for fun and the people that are there aren’t there to judge you. You’re not in a fishbowl at a zoo. They like Olympic sports or a specific skater. Being in a completely different setting than competition can be fun. And it keeps you moving and skating in the off season.”

Stars on Ice also allows a skater some flexibility with their time on the ice. Quite literally, the time a skater spends on the ice is longer than in a competition, but skaters are also allowed to pick whatever music they like for however long. “And you can just do things that you love to do,” Gold adds. “If you want to hold a spiral for half of your program, do it. You just do things that are best in your skating. It’s all about feeling good for everyone. I’ll load up my [competition] program with all these hard jumps and then [at Stars on Ice] it’s not really about that. The audience just wants to see you have fun skating.”