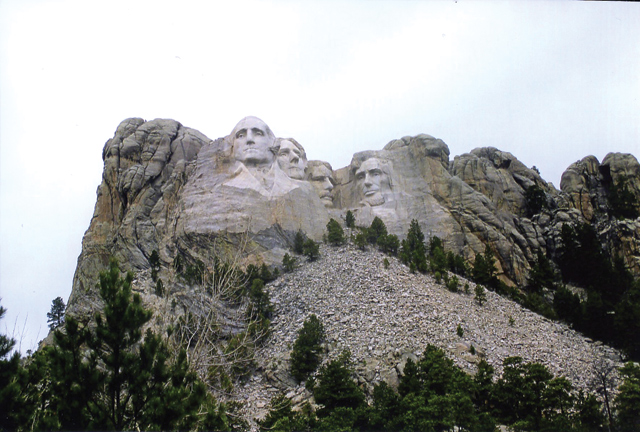 A trip to South Dakota is never complete without a visit to the iconic Mt. Rushmore monument.

They tried to name it the Sunshine State. South Dakota boasts more rays than Florida, but in true Midwestern modesty, they let the title slip away. So then, what’s to lure visitors to Sioux Falls and Rapid City and all points in between?

How about…load them up with art?

It worked, starting with Mount Rushmore National Memorial, where sculptor Gutzon Borglum proved that “If you carve it, they will come.” He set to work on the project of a lifetime, creating the heads of four U.S. Presidents—Washington, Jefferson, Lincoln and Teddy Roosevelt—by dynamiting the hillside, then applying a pneumatic drill, until their iconic likenesses emerged. Today the park draws folks from all over the globe to admire the majestic quartet and set hearts pounding with pride in our country.

Think those are big? Even more monumental is nearby Crazy Horse Memorial, the world’s largest mountain carving—yet, after 70 years of labor, only the warrior’s handsome head (87 feet tall) and arm are finished. The project was suggested by Chief Henry Sitting Bull to remind one and all of the heroism of the Lakota chief. It will continue for decades; but in the meantime, visitors can crawl right along that vast and mighty outstretched arm to capture an unequalled view. And honor the Native Americans whose land this was. We’ll be doing more of that on this road trip, but first back to the presidents—and that means back to Rapid City, where a life-size bronze statue of each of our nation’s past presidents occupies a corner of a downtown street (maps available).

Half a dozen of those presidents slept in the Hotel Alex Johnson, adorned in grand old fashion with bison heads and Native symbols. A black away, Prairie Edge sells elegant artifacts by contemporary tribal artist (shields, rattles, moccasins, jewelry). There’s more Native art at the Dahl Art Center, featuring a poignant exhibit of paintings and songs commemorating the massacre at Wounded Knee. An adjoining gallery showcases this year’s winners of the Governor’s “Best of the West” competition.

Everyone’s a winner on Art Alley. The city’s psychedelic passageway showcases spray-painted murals that emerge, sometimes nightly, atop the rugged bricks. Then grab a craft cocktail (another art form) at Kol, whose dinner menu segues from sensuous pizzas to ribeyes.

Heading out of town, we found our way to Chapel in the Hill. The tiny stave church hidden in the pines is an exact copy of the 850-yeqr-old Borgen Church of medieval Norway, blending pagan Viking symbols with early Christian crosses adorning vertical logs under the wood-shingled roof. A sliding window let lepers stand outside to hear the holy message. Nearby, a pioneer cabin brims with authentic furnishings—violin, spinning wheel—while a grass-roofed gift shop showcases All Things Norwegian.

Hill City, a bonbon of art amidst the eye candy of the Black Hills, is site of a gallery where the translucent watercolors of John Crane capture the passing of the seasons, while Randy Berger, of Warriors’ Work Gallery, spotlights contemporary Native work (plus the elite leather jackets he fabricates). Add in brats and spaetzle at nearby Alpine Inn while you ease the crick in your neck gained while glimpsing the gorgeous natural art blanketing the scene. 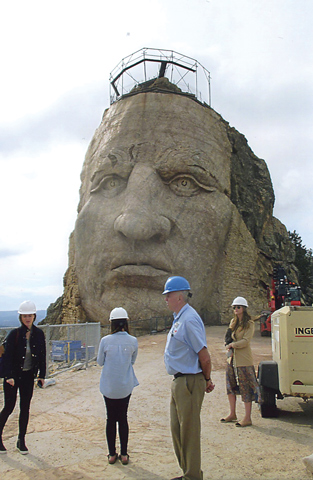 The Crazy Horse mountain monument in the Black Hills has been under construction since 1948.

On to Chamberlain, anchored on the Missouri River, to gather again the threads of Native life, starting at the St. Joseph Residential School, where the mission is to erase the traumatic memories of forced separation from families of decades past. Here, kids from too-tiny-to-teach communities win spots (free) among a dozen homes with doting house-parents while they study a core curriculum, the Lakota words and ways, and religion (gym and swimming pool, too). The adjoining Akta Lakota Museum hosts a treasury of artifacts, from buffalo skins to birchbark canoes. Then spin over to the river’s bluff where sculptor Dale Lamphere has constructed Dignity, a 60-foot stainless steel personification of Lakota female fortitude.

Next, we’re on our way to tiny (pop. 700) Faulkner, which punches way (way!) above its weight when it comes to art. In fact, noted Australian mural painter Guido vanHelton chose the town’s white grain silos onto which to depict his vision of South Dakota’s solid social values personified by a pair of kids cavorting around its curves. As he worked, the town hauled out lawn chairs and coolers to watch Guido’s progress. While you’re here, pause for a ride on the 1925 carousel and peek at the Buffalo Round Up mural, too.

That white-columned, red brick building ruling the landscape at Watertown? No, not a college. Not city hall, either. It’s the Terry Redlin Art Center, showcasing the “Master of Memories’” 165 original oil paintings of rural scenes, prints of which sold out each time one rolled off the presses. As a teenager, Redlin lost a leg in a motorcycle accident, but turned tragedy into lemonade when insurance money enabled him to enroll in art school in St. Paul. Watertown also offers a sculpture walk featuring 13 new creations each year.

Brookings, our next stop, boasts an art museum on the university’s campus, where seven galleries celebrate a range of styles from Harvey Dunn’s “Fences, Cows, Plows and Oxen” scenes of rural life to a fun and futuristic hurrah of pieces fabricated from felt.

At the finale in Sioux Falls, we meet up again with sculptor Dale Lamphere, completing final touches of his Arc of Dreams, spanning the Big Sioux River. Nearby the new Levitte at the Falls venue is preparing to offer 50 concerts this, and every, summer—crowds of 3,000 folks (plus food trucks) a night for the free festivities. Sioux Falls offers a sculpture walk of its own, too—in fact, it’s the largest one in the entire country, with 59 opportunities for selfies in front of the art.

The venture rejuvenated a sleepy downtown, now humming with ops for dining, clubbing and shopping at only-in-South Dakota finds like Zandbros, a general store where you’ll discover bandanas and antiques and everything in between, including an eccentrically-collated book section featuring a non-fiction titless with the caveat, “batteries not included.” Pick up your yard cow here.

Washington Pavilion hosts the city‘s official art collection, with galleries ranging from current socio-politically-tinged Native works to those of university faculty. Swing by the iconic falls that named the city for a sweeping view of nature’s own sculpture of water rushing over the pink stone that stamps the “banana belt” of South Dakota.

So, who need to boast of sunshine when art rules the state? For more information, visit www.TravelSouthDakota.com.