Gophers, Lynx, and Game of Thrones: An Interview with Janel McCarville 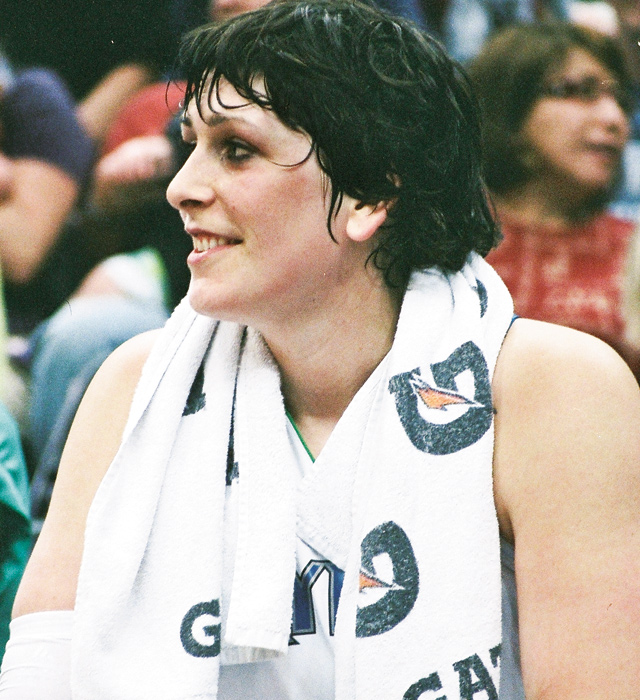 Janel McCarville is back in Minnesota playing Center for the Minnesota Lynx. As part of the Golden Gophers, she and fellow Lynx Lindsay Whalen took the team to the Final Four in 2004 and have now been reunited in the WNBA. Catching her after a morning practice in Minneapolis, Janel gave me some fun answers to some random questions.

How long have you been back in Minnesota?

I originally was traded for on March 1. Between March 1 and May 5, I was here week-on/weekends-off to get acclimated to the new situation. [Lindsay] Whalen was here, coaching staff…so I got some interactions with them. Putting in early play calls so I was ahead of the curve in a way. Since May 5, I’ve been here nonstop.

Where are you living in the Cities?

St. Louis Park, over by the theaters…I’ve got the food there close by. It’s a nice little situation.

What’s your favorite part about being back in Minnesota?

I’m close to home. There’s the familiar fan base. The great fans that I had through college still follow to this point and I’ve got friends in the area, too, for life outside of basketball.

How do you spend a day off?

Days off? You know, get some food…catch some movies. We don’t really get much downtime. We’re always on the move with appearances, games, practices, things like that…so when we get a day off, I really like to put the feet up and relax.

Okay, so what’s your ideal veg-out scenario at home?

Feet up, watching Game of Thrones.

I don’t know! I really like Khaleesi [Daenerys Targaryen] but I didn’t like the whole situation, how it started, that was messed up. But then she whupped some ass and dominated. But the thing about that show is that everybody betrays everybody. They’re all going to die at some point.

Okay, so your feet are up, you’re watching Game of Thrones, what are you ordering in for food?

I would order in pizza.

It depends. There is a time and a place for everything. If it’s thin crust, it’s not about a place as much as it has to be cheese, sausage, mushroom, and onion–maybe some pepperoni. If it’s deep dish or thicker, probably Pizza Hut Stuffed Crust–and it’d be pepperoni.

You were recently playing in Turkey. What was the biggest difference between there and here?

All seafood still has the heads on. It’s not that big a deal, but you catch it in the river and it’s still got its head on. After you pan-sear it and the eyeballs are popping out and still looking at you, it’s a little bit of a change. That’s one thing.

Now that you’re back in Minnesota, are there any familiar faces you’re looking forward to seeing or playing against?

There are a couple of people throughout the league who I haven’t seen for a while because I haven’t played for a while, so I’m looking forward to seeing them. But at the same time, that’s going to be after the game. Leading up to the game, it’s all about focus for the game. Until the horn blows and the game’s over, we’re kind of enemies in my eyes.

What do you think is going to happen this season?

What I hope will happen is that we bring a Championship back to Minnesota. It’s hard to say, though. There are a lot of great teams in the league, great players…and obviously each team sets out to win the Championship, so you’ve got your work cut out for you night in, night out.

Last question: Are you seeing someone?

So you’re off the market.

I’m off the market. [Laughs.] She’ll be happy to hear that.