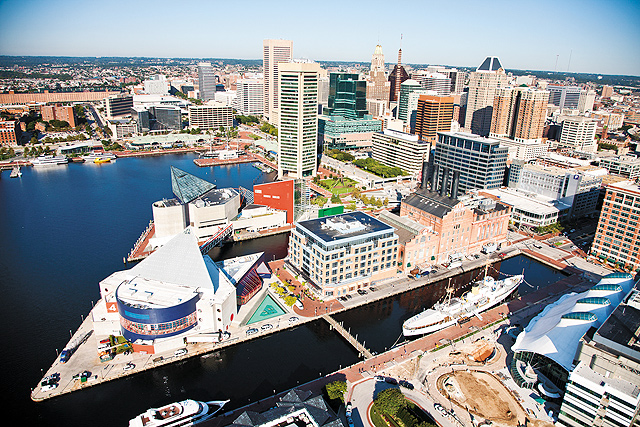 History gets a grip on you here. But this is not the dreary stuff of high school textbooks; it’s like attending a family reunion, where grandpa shows off his Army medals and grandma shares tales about when the kids were little. Except the kids we’re talking about here were the founders and defenders of that new nation called the United States.

Get over it, D.C., with all your marble monuments. Baltimore, its nearby cousin, is the patriots’ beating heart. Charles Carroll, a signer of the Declaration of Independence and arguably the wealthiest man in the country, lived here (tour his mansion). The action stepped up during the War of 1812, when seamstress Mary Pickersgill was assigned the task of stitching a flag for Baltimore’s Fort McHenry, under siege by the Brits. The banner she delivered—an awesome 42 x 30 foot flag (tour her house with the repro)—taunted the King’s navy with a feisty “gotcha.” When spotted by local poet Francis Scott Key, he gasped, “O say can you see….” His original manuscript is on view at the Maryland Historical Society, along with John Hancock’s John Hancock on a commission, a letter by General Washington in his spidery hand, and the legendary Peale family paintings of Army greats.

Segueing to the Civil War, the Society showcases photo journalist Matthew Brady’s groundbreaking shots of war casualties. And Baltimore’s significant mark on history kicks in again. Straddling the Mason-Dixon line, it was a city divided, fueling the 1861 riot as Union troops transferred from one railroad station (now the Civil War Museum) to another (now in Camden yards, where the Orioles play, overseen by a statue of homeboy hitter Babe Ruth), resulting in the first casualties of the War Between the States. 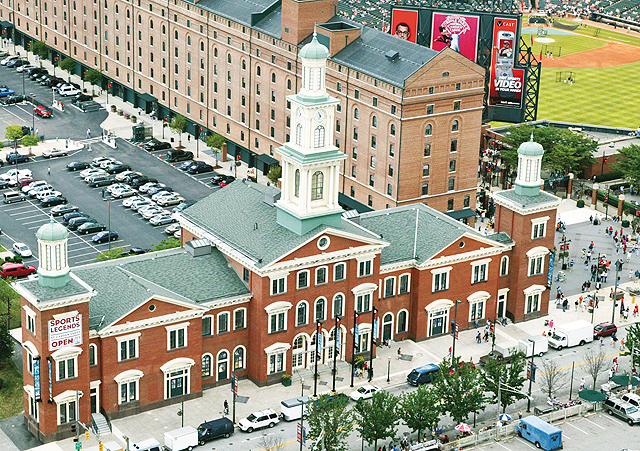 Baltimore was a hub of the Underground Railroad, for courageous Harriet Tubman lived here, as did Black abolitionist Frederick Douglass, whose stories—and those of countless enslaved people—are revealed in the Reginald F. Lewis Museum, which details African American history, beginning with slave ships docking in the harbor. Josiah Herson, the model for Uncle Tom, was born nearby. Yet by 1840, Baltimore also boasted more free Blacks than any state in the nation—shipbuilders, sports heroes, medical professionals, and music makers like Billie Holiday and Eubie Blake. In fact, in 1937 the police force hired its first African American—Violet Whyte, known as the “Law Lady.”

The Maritime Museum on the gorgeous, camera-ready Inner Harbor (reclaimed from grunge to glamor in the Seventies) unravels history’s story aboard ships. The Constellation of 1854—a Man o’ War used to catch slave ships leaving Africa—was the last sail ship in the Navy. A submarine nearby survived Pearl Harbor. Then hop a water taxi and chug off to yet another enticing neighborhood, like Federal Hill, where a huge 15-star flag still flies. Below it, the amazing—a-mazing!—Museum of Visionary Art captures the creativity of untrained “folk” artists. Outside its mirror-mosaic facade twirls a giant whirligig, while atop the doorway a sculpted biker chick guns a souped-up Harley. Wonders continue: busts fashioned from spare piano parts; a life-size Isaac Stern-cum-violin of matchsticks; a crocheted hobby horse; a bearded man conceived of telephone wire.

Geppi’s Entertainment Museum, at the ballpark, captures fun antics of another sort—life-size Batman and Superman supervising a collection of social history in the form of movie posters, comic books, Disney figures, Popeye and Lone Ranger games, on through Barbie and G.I. Joe to Star Wars collectibles as commentary on their times. 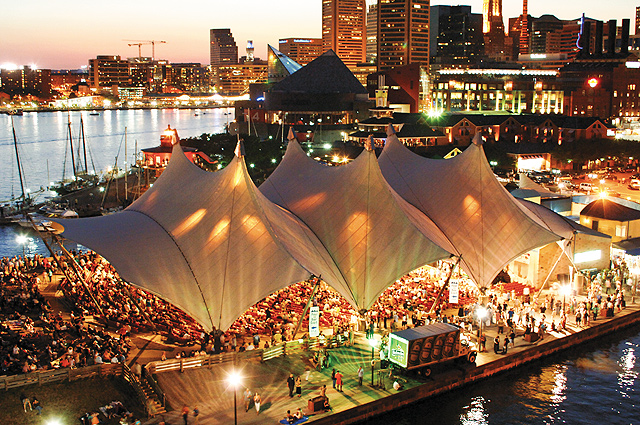 Bounce onto a water taxi or ride the wonderful Charm City Circulator buses—free, free, free!—to the other side of the harbor, where immigrants landed and launched Little Italy. (And Little Italy launched Nancy Pelosi, whose father served as mayor. “I learned politics around the dinner table,” says the Speaker of the House.) Today this working class enclave is splashed with red-sauce restaurants like a Sabatino’s, where I dined amidst tutta la famiglia on Mother’s Day, more holy to Italians than Christmas.

Little Italy seeps into Fells Point, the city’s oldest ’hood, lined with paving bricks and door stoops brought from the Old World as ships’ ballast. Today tidy brick row-houses host indie shops and eateries like Duda’s Tavern, where its fifth-generation proprietors serve, they claim, the best crab cakes in Maryland. (I won’t dispute it, after a go at the filler-free lump meat.) The condiment of choice is a glass of Natty Boh (National Bohemian). Only in Baltimore.

A three-hour, belt-busting Charm City food tour of Fells Point led me from Ze Mean Bean (a bad name for this sweet, uber-Polish café majoring in pierogi and potato pancakes), to Hungry Andy’s, where you won’t be after his horseradish-licked roast beef sandwich, then Tapas Adela, where spicy chickpeas, patatas bravas, and meatballs laced with manchego cheese and almonds filled the bill. One Eyed Mike’s—the only Grand Marnier bar in the U.S., in case you’re keeping track—plies guests with its addictive Maryland crab soup. 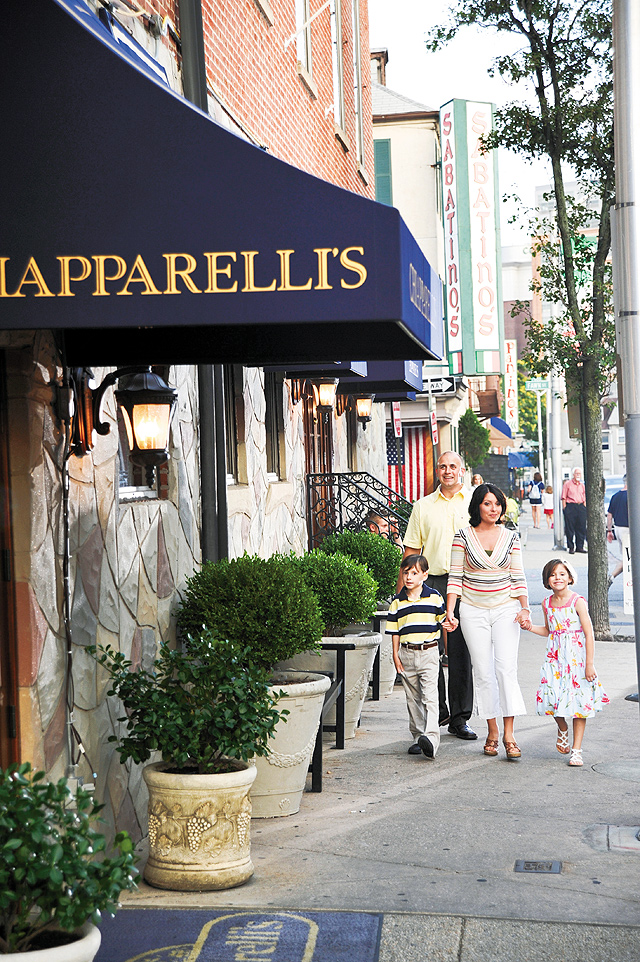 I peeled away just in time for dinner at Fleet Street Kitchen, where locovores feast on treats like foie gras with brioche pudding and rhubarb-black pepper ice cream. Pork belly slithers over summer beans and roasted fennel in a purée of smoked tomatoes, while short ribs partner with creamed spinach and red currants. The amuse du jour was a single infant carrot atop a schmear of fennel goat cheese. All BTG wines available in half portions, too: talk about user-friendly.

Or head to the harbor’s Waterfront Kitchen, a seed-to-table dining room divine, where a baby kale Caesar stole my heart with its Maryland oyster dressing, preceding a goat cheese terrine jeweled with asparagus, while a chicken liver mousse was spiked by pickled cauliflower with a kick. Proceed to Chesapeake Bay black bass, then Maryland strawberry shortcake.

Back at the Inner Harbor, Miss Shirley’s (recommended by my taxi driver, who knew what he was talking about), served me a three-fer lunch of sliders: pulled chicken with pimento cheese; smoked bacon with cheddar; and spinach/roasted red peppers in goat cheese, served with a wicked side of bacon-centric grits. Locals sprinkle on the Old Bay powder. But then, they do that on everything, from fries to martini rims. Pass the shaker and call me ‘hon.’ 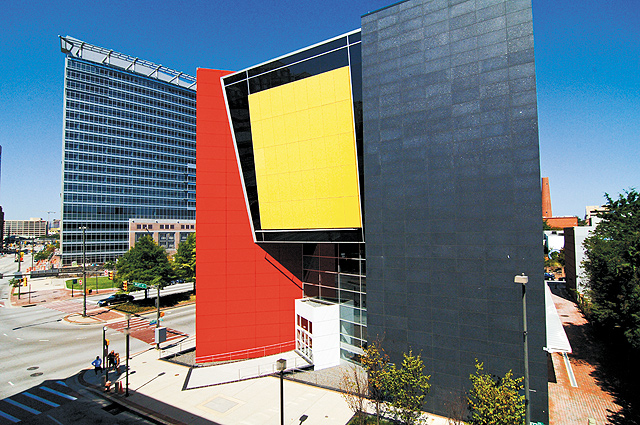 Which reminds me: Hairspray’s John Waters is a native. So are Johns Hopkins (this hospital rivals the Mayo Clinic) and Edgar Allen Poe.

Board the Circulator north to Mount Vernon, the city’s cultural heart, anchored by mansions-turned-museums like the Walters, corralling a world history of art from Egypt and Rome through Hindu gods of India, Muslim scrolls of Iran, and Ethiopian and Russian icons, to a trio of medieval Virgins (Spanish, French, and German) warily eying each other over their somber babes. Across the street, the fancy ironwork of the Peabody Library guards its grand collage of books.

The Visitors Center on the Inner Harbor offers not only all the info you can think of, but also daily guided walking tours of the city’s historic neighborhoods (or brochures to self-guide). To get started, visit www.baltimore.org and www.GLCCB.org, geared to the gay scene. 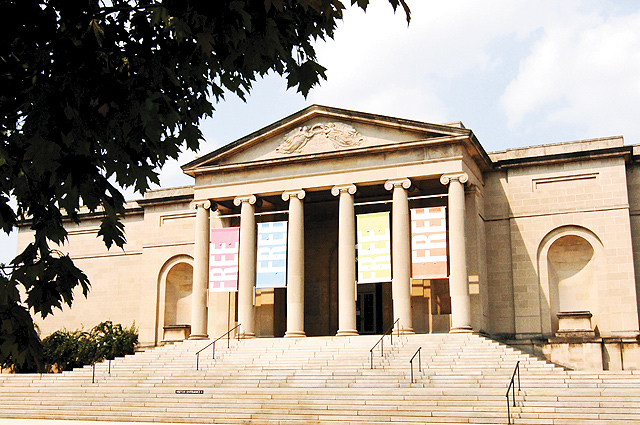 B’More QFest in June celebrates films by GLBT filmmakers. Pride, a ten-day extravaganza, began in 1975. This year, 5,000 celebrants are expected, beginning June 13 with Twilight on the Terrace, a prime-time cocktail party at the Baltimore Museum of Art. Saturday, June 14 leads off with the High Heel Race and the Parade, followed by the Block Party. Sunday features the Festival, with a drag stage, food and drink, and a line-up of entertainment (www.Baltimorepride.org). 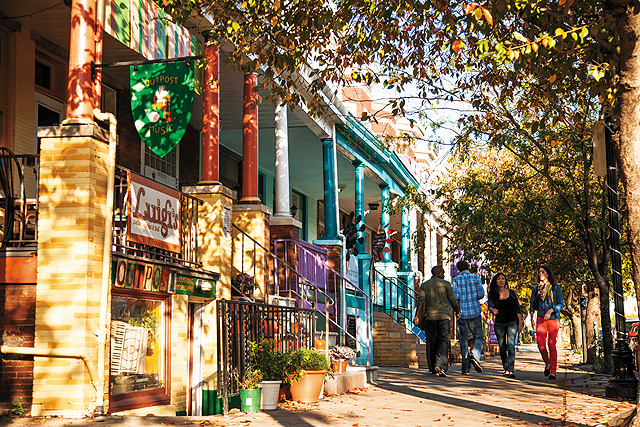