Going to the Movies with Jeff & Drew: “The Huntsman: Winter’s War” 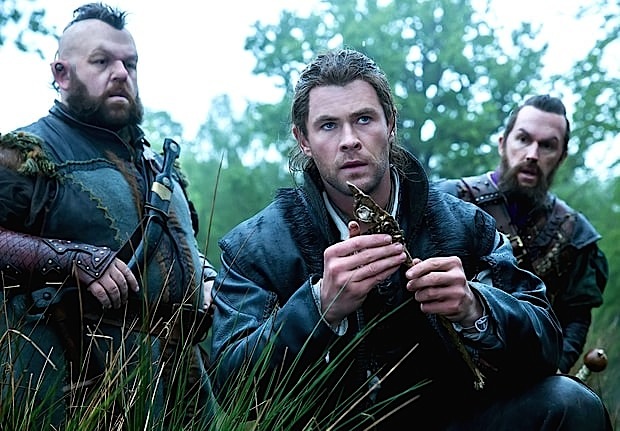 Love conquers all, except for bad writing and a paper thin plot.

Charlize Theron returns as the wicked Ravenna, and Emily Blunt joins her as the frozen Freya. In this prequel and sequel to 2012’s Snow White and the Huntsman, taking place many years before the first film, evil queen Ravenna is trying to convince her pregnant younger sister not to be a fool to love. A tragedy consumes the young princess that unlocks her frigid powers, turning this hopeful girl into the Ruler of the North. Queen Freya starts building an army by kidnapping children and turning them into a group of elite warriors called Huntsmen. Among her first recruits are Eric and Sarah, who grow up to be Chris Hemsworth and Jessica Chastain. Their queen tells them not to fall in love, because it is a weakness. They do anyway. The Queen finds out about the romance and punishes them for it.

Flash forward seven years. Glossing over the fact that Kristen Stewart is not in this movie, Ravenna is dead, and Freya is ruling the North with an icy fist. Eric learns that the magic mirror has gone missing, and The Ice Queen seems interested in retrieving it. Our hero finds himself in a race to find the mirror and encounters dwarves, goblins, and fairies in his epic journey. 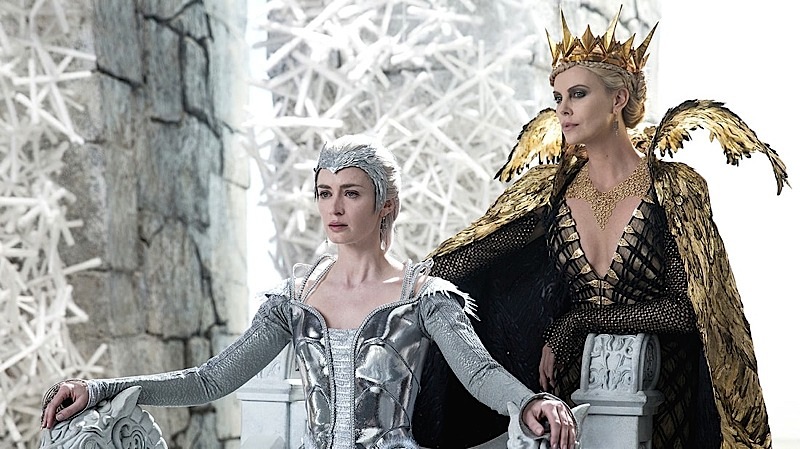 The Huntsman: Winter’s War is, in a word, weird. It tries to spark interest with characters we already know who are not introduced in the last flick. Freya is painfully inspired by Frozen’s Elsa, from the look of her castle to the way she dresses and even the sound her dress train makes as it drags across the floor. Sarah’s character is far too similar to Merida from Brave. They have the same hair, feisty attitude, and weapon of choice: a bow and arrow. And Charlize Theron, the strongest actor by far in this movie, is oddly bookended in this film. Her greatest performance is at the end of the movie and is the only reason to sit through to the end. With three female leads in this film, you would think there would be a strong and inspiring take away for women. Instead, we are left with the message without the love of a man, women are evil.

“The Huntsman: Winter’s War fixes one problem with the previous film: Kristen Stewart. Sadly, it still needs a story, any character development, and stakes.” —Drew

“The whole movie was so underwhelming that I just wanted to be doing something else the whole time.” —Jeff

The Huntsman drags on with lackluster acting, a subpar action and a story that doesn’t go anywhere. The performances were extremely lazy throughout the film. Hemsworth’s Huntsman plays so reminiscent of Thor that you wonder if he even tried to conjure up anything new for the role. The dwarves, who are only there as comic relief, fail to complete the task with badly written jokes shoehorned into the story. The rest of the cast stands around as scenery most of the time; they could have been cardboard cutouts and no one would have noticed. The best performance was brought by Theron. She did what she could, but even a good performance can’t hold up when everything else is pulling you down.

“It feels as though everyone just showed up to the set to collect their paycheck. Everyone just said their lines in the most basic way possible. They weren’t bad, just boring.” —Jeff

“Charlize Theron is the only good part of this movie, and she is greatly underutilized.” —Drew

The several fight scenes are slow and painful to watch. Extreme camera shakes seem to be an attempt to mask poorly executed hits, but, once again, they fail to do so. One fight in particular looks so slow that it feels like they filmed a rehearsal and decided that it was good enough.

Story is the most imperative thing to any movie, and this production is a prime example of a very weak story that doesn’t give the viewer an experience worth watching. The characters just move from one place to another with very little motivation, sometimes none at all. They have some dialogue while standing around, and then move on. Things just happen with very little reasoning and zero payoff. The suspense is taken away early in the film when people keep seeming to die but then are immediately revealed to be alive. What happens from scene to scene has little to do with the overall plot, which itself borders on murky at best. No war happens, love doesn’t conquer anything, some things happen and then everyone goes home.

This poorly executed fairy tale should have been a straight-to-video movie.

“I lost count at the main character non-death deaths, with how often it was happening, because I just stopped caring. I was so bored through the whole movie that, had I been watching it at home, I would have found other things to do while watching just to keep myself occupied.” —Jeff