Going to the Movies with Jeff & Drew: “Teenage Mutant Ninja Turtles: Out of the Shadows”

Turtle fans, this is the one we have been waiting for.

Teenage Mutant Ninja Turtles: Out of the Shadows starts with our heroes-in-a-half-shell leaping off one of New York City’s most iconic buildings, springing into motion an epic chase scene that ends with, you guessed it, PIZZA. With no muddled or confusing origin story to deal with, the second installment of Michael Bay’s Turtle franchise succeeds with getting to the action as quickly as possible. The Green Machine perform ridiculously impossible stunts and have as much fun doing it as audiences will watching it. 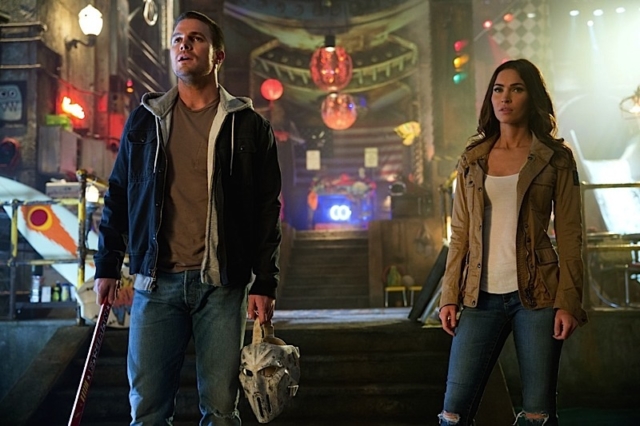 The Turtles catch wind that their arch nemesis, The Shredder (Brian Tee), is about to break out of jail. Little do they know, T.C.R.I. scientist Dr. Baxter Stockman (Tyler Perry) is helping Shredder escape with his new experimental teleportation equipment. Due to a miscalculation, Dr. Stockman transports Shredder to dimension X, where we are introduced to Krang. He wants Shredder to find missing pieces of his transporter so he can bring his war machine, the Technodrome, to Earth so they can enslave humanity.

The film introduces villains Bebop (Gary Anthony Williams) and Rocksteady (WWE’s Sheamus) to a new generation of movie-goers. First introduced in the 1987 cartoon series, they are faithfully portrayed as dim-witted buffoons. They are highly entertaining, and they seem to find as much joy in their rhino and warthog forms as they do in demolishing everything on screen. Fan-favorite vigilante Casey Jones (Stephen Amell) does play a key part in the film. But, sadly, he is underutilized in every fight scene, and his initial fight scene is lackluster. 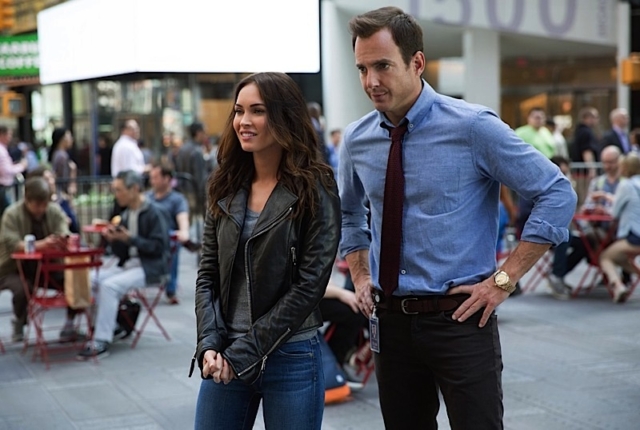 Visually, this movie is stunning. The action looks like a Michael Bay flick without overdoing it. The CGI turtles blend seamlessly into the live action. Relatively new director Dave Green uses long camera sweeps to flow with the epic action sequences, sucking the viewer into the gritty world he has created. Nothing feels out of place or placed on screen as filler. The alien machinery looks fantastic and isn’t over-the-top cheesy.

The film sets itself apart from the typical action flick with its well thought-out story. Green takes the humor and light-hearted nature of the ’80s cartoon mixed with the grittiness of the comic book and melded them into, arguably, the best Turtles film yet. Fantastic one liners and quips really embody who the Turtles are as characters. The movie keeps the science simple while still giving a satisfactory explanation as to how and why things work.

There are points, though few, between action scenes that are exposition-dialogue heavy in order to move the story forward, but it’s integrated in a way that doesn’t make them stand out terribly. Also, certain parts could have benefitted from a bit more explanation as to why things were happening, but it doesn’t make the film falter.

“This movie is what every Turtles fan has been waiting for. We have had to suffer through two sequels, an animated movie and a subpar reboot to finally get a film we deserve.” —Drew

“This movie made me feel how I remember feeling when watching the ’80s cartoon and reading the comic: the humor, the characters, the catchphrases, all of it.” —Jeff

“Not to mention the vehicles we all wanted as kids. The Turtle van is upgraded to a garbage truck and the Technodrome is just how you remember, eyeball and all.” —Drew

“It will be hard to top this movie.” —Jeff

Everything a fan of the ’80s cartoon, comic, and movies could want is packed into this movie, yet it’s still refreshing enough to bring in a new generation of Turtle fans. The characters stay true to their roots. Vehicles with ties to the cartoon make appearances and have enough throwback to make your inner geek squeal. Out of the Shadows is a good family film everyone can enjoy.